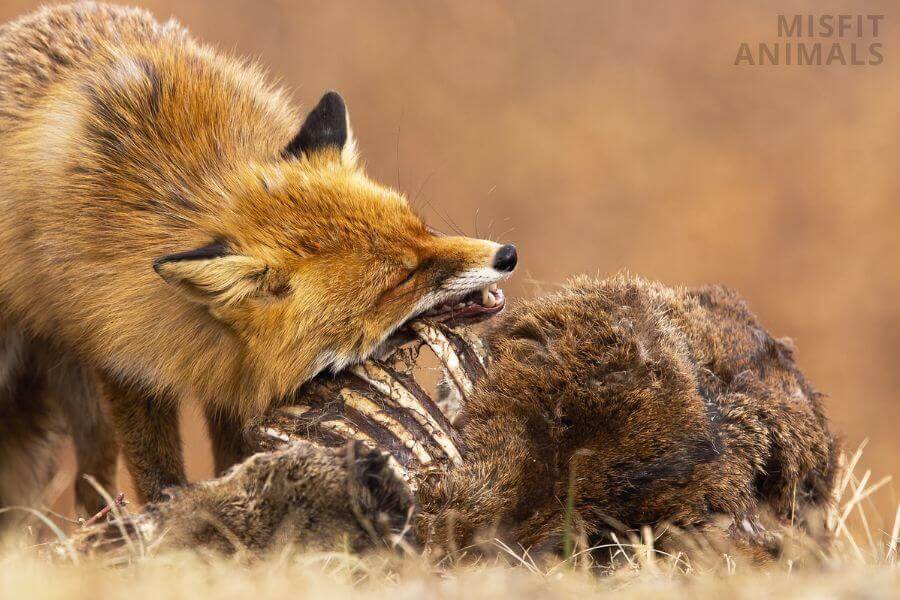 Beavers are a beloved and iconic animal, but what creatures hunt them? What natural predators prey on beavers?

This in-depth guide will explore the animals that eat beavers, from smaller predators to apex predators.

Learn about the natural behavior of these predators and how they interact with beavers.

Here are the nine most common beaver predators:

Other predators include coyotes and otters.

According to Smithsonian’s National Zoo, the most common beavers predator is the wolf, besides humans.

Beaver predation typically peaks in the spring and fall, when wolves are more active in search of food.

Beavers are a favorite prey of wolves because they are relatively easy to catch and provide a substantial amount of meat[1]. Wolves hunt in pairs, using their superior agility and speed to chase down beavers.

Once a beaver is caught, the wolf will often drag it out of the water to feast on it.

Wolverines are another one of the beaver’s most common predators. They are large, aggressive animals that can kill and eat beavers. Wolverines live in North America and Eurasia.

Wolverines are the largest member of the weasel family. They have thick fur that is brown or reddish-brown in color. They have large paws with sharp claws that help them climb trees and dig burrows.

They live alone in the wild except for when they are raising their young. As carnivores, they eat meat, including the beaver.

Wolverines will kill and eat other animals, including rabbits, rodents, birds, and even caribou. They also eat plants and berries.

Owls are some of the most common predators of beavers, along with other birds of prey:

While beavers try to avoid being active during the day when these predators are most likely to be hunting, they are not always successful in doing so.

Owls typically go after the smaller, younger beavers first since they are easier to catch and kill. This can lead to the death of an entire litter of beavers if an owl is able to get to them.

While most owls will only eat one or two beavers per year, there have been instances where an owl will kill upwards of 10 beavers in a single season.

Lynx hunt beavers by stalking them from behind and pouncing on them, killing them with a single bite to the neck. They are efficient hunters and can take down a beaver in a few seconds.

The lynx’s main diet is actually hares. Beavers only make up a small portion of their diet in some areas.[2]

In North America, lynx populations have been known to fluctuate significantly based on the availability of beavers.

When beaver populations are high, lynx populations often increase as well. This is likely due to the fact that lynx have a much easier time catching and killing beavers when there are more of them around.

When beaver populations decline, lynx populations typically decline as well. This is likely due to the fact that there are simply not as many beavers around for the lynx to eat.

Foxes are among common predators of beavers. Foxes tend not to target larger animals when they hunt, but instead go after the young[3]. In some areas, foxes are the only predator of beavers. In others, they compete with coyotes, wolves, bears, and humans.

Foxes typically hunt at night, using their excellent hearing and sense of smell to locate their prey. They will also eat carrion, the remains of other predators’ kills.

Young beavers are relatively easy prey for foxes, as they are slow on land. In addition, their dens are located close to the water’s edge, making them even more accessible to predators.

Foxes usually kill beavers for food, but they will also do so to protect their territories. Their dam-building activities can alter the landscape in a way that foxes view as a threat.

Eagles are one of common bird of prey predators of beavers. They are large birds of prey that can weigh up to 15 pounds and have a wingspan of up to 8 feet.

Eagles live in wooded areas near streams or lakes, where they can find their preferred food: fish.

When an eagle spots a beaver swimming in the water, it will swoop down and grab it with its powerful talons. Eagles also eat beaver kits that are still in their dens.

Hawks come in many different sizes, generally smaller in size, which is why it’s rarer to see hawks attack beavers. But, all hawks have sharp talons and beaks that they use to kill their prey.

Hawks typically eat small mammals like mice or rabbits, but they will also eat beavers if they get the chance.

Like eagles, hawks will swoop down on a beaver swimming in the water and grab it with their talons. They also eat beaver kits that are still in their dens, like eagles.

Bears are a common predator of the beaver. Because of bears’ large size, they have no issue taking down a beaver, though they typically hunt for larger animals, such as deer.

Grizzly bears, which are among the largest of bears, weigh up to 1,200 pounds and have sharp claws and teeth.

Depending on the type of bear, they live either inland or along the coastline. They are often found near water, where beavers also reside.

When a bear does attack a beaver, it will typically kill and eat the entire animal. They use their large claws to tear the beaver apart, feasting on it afterward.

Bobcats are another kind of animal that hunts beavers for food. These animals are similar in shape to house cats, but are slightly larger and have longer and sharper claws and teeth.

Bobcats live in many of the same areas as foxes, wolves, coyotes, and bears, which is why they often fight for food. They often target small mammals or rodents, which is why beavers are rare prey of theirs.

They will sometimes eat beavers, but they are not as common a predator as wolves.

The last on the list are mountain lions. They typically live in mountainous areas and are fewer in population compared to wolves. They don’t run into beavers as often as other predators but are still fond of beaver meat.

One of the mountain lion’s strengths is its speed. They attack their prey by stalking it, then punching it when they get the change. They quickly strike and bite them, and then eat them.

Beaver predators come in all shapes and sizes, from eagles to coyotes. These predators are a major threat to the beaver population. The most common predators include wolves, owls, and bears.

Yes, wolves are one of the many predators that hunt beavers for food. Wolves typically live in wooded areas near streams or lakes, where they can find their preferred food. When a wolf attacks a beaver, it will typically kill and eat the entire animal.

Otters are carnivorous mammals that belong to the weasel family. Their diet consists mainly of fish, but they will also eat frogs, crustaceans, birds, and small mammals. Some otters have even been known to eat beavers!

As it turns out, coyotes are opportunistic feeders and will consume just about anything they can get their teeth into, including beavers. Coyotes typically go after the young beavers as they are smaller and easier to take down. They have been known to attack and kill full-grown beavers as well. In most cases, though, the coyote will eat the beaver meat and leave the rest of the carcass behind.

Alligators are opportunistic feeders, which means they’ll eat just about anything they can catch and kill. That includes beavers if the alligator is large enough.