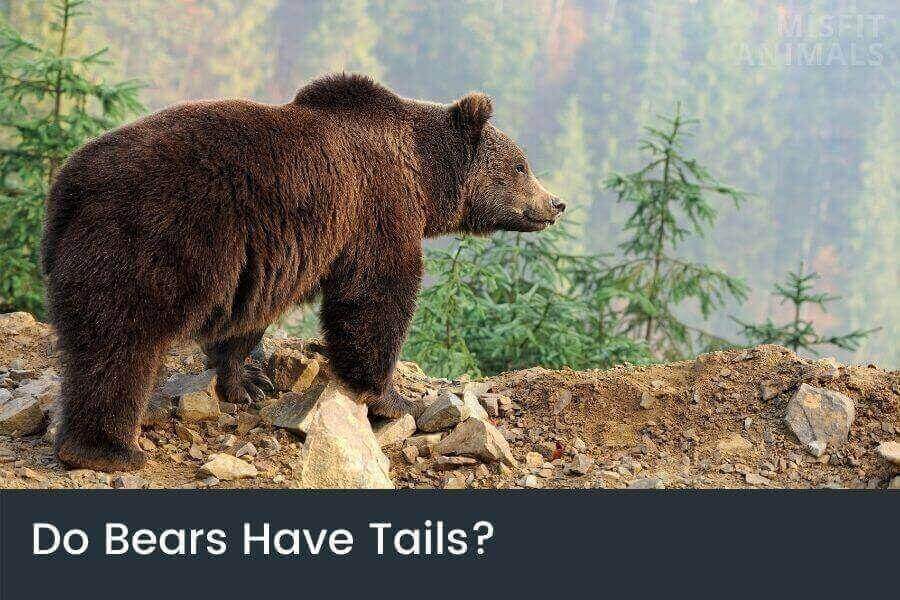 Bears do have tails, but they are very short and are known as vestigial tails. They used to serve a greater purpose, but have over the course of many years shrunken down and become almost functionless.

Bears don’t have a long furry tail that wags around behind as many furry animals do.

Instead, bears have a vestigial tail which is essentially a short flap of skin with no muscle or bones inside it.

While it may have used to be very functional, evolution has taken its toll, and have caused bears’ tails to shrink down to a few inches in length.

In this article, we’ll discuss the use of bears’ tails, why their tails are so short, and the difference among species.

Do Bears Have Tails?

Yes, bears do have tails. They are called vestigial tails and they serve only a single purpose: to cover the bear’s anus when they are in cold weather.

Most bears have tails, though some can only be seen on X-Ray images. They’re called vestigial tails.

Vestigial is defined as:

“A part of the body that is degenerate, rudimentary, or atrophied, having become functionless in the course of evolution”

Hence, it used to serve a greater purpose, but has, due to evolution, shrunk and become almost functionless.

The tail is not very long, only measuring between two and eight inches in length.

What Is a Vestigial Tail?

Bears are the only mammals in the world that have tails. Bears’ tails are called vestigial tails, which means they’re essentially short flaps of skin without function. Its only use is covering their anus to avoid cold.

The term vestigial refers to the fact that it used to be longer but has shrunk because of its lack of purpose.

The tail has been gradually shrinking over time due to evolution and natural selection, much like humans tails have disappeared compared to our ancestors, the apes.

In other animals, the tail plays a role in balance and movement, but this has is not true for bears. Overall, the vestigial tail isn’t necessary for survival and doesn’t serve much of a purpose.

How Long Is a Bear’s Tail?

Bears’ tails are between 2-8 inches long. They’re shorter than most other animal tails.

Bears are among the mammals that possess tails, though they aren’t used for much else than keeping warm. Interestingly enough, many animals in colder climates have longer tails, which helps them keep warm.

Bears only need their tail to keep a single area warm, their behind.

In bears, this appendage ranges anywhere from two to eight inches long, depending on the species. While it may seem insignificant, this tiny bit of flesh can mean the difference between a warm and toasty posterior or one that’s cold and uncomfortable.

Why Do Bears Have Short Tails?

The primary reason why bears have short tails is that they no longer need them for locomotion or balance [1].

Unlike dogs and cats, which use their tails for balance and navigation, bears rely on their large size and powerful limbs to get around.

As such, their tails do not need to be as long and sturdy as it most likely once was. Natural selection has spoken.

What Bear Has a Long Tail?

No bears have long tails. They all have short, stumpy tails.

There has been no evidence of a long tail from fossils, but it is thought that they once had long tails. The evidence for this is that their remains do show long-tail vertebrae, though no muscles or ligaments are attached to them.

It’s called a vestigial tail, which is essentially a short flap. Its only use is covering their posterior to avoid cold.

It has been found that the length of their tails can vary due to genetics. Some also claim that diet has an impact; those who are getting more calories may have longer tails than those who don’t get as many calories.

This may be because of their get more calories for growth early on in their lives.

Bears typically have tails between 2 and 8 inches, though it may vary from species to species.

What Do Bears Use Their Tail For?

Bears don’t use their tail for anything. Its only function is to protect its posterior against cold winds.

Bears, unlike most other animals, don’t use their tail for anything else than covering their anus and heat conservation. As it’s not very long, it can’t really do much. The tail is called a vestigial tail, which means it has lost most of its original function.

It’s believed that bears used their tails for balance and communication purposes. But over time, those functions have diminished due to evolution.

Bears use other methods to keep warm, as their big fur coats. Their tails are helpful, but not essential for survival.

Do All Bear Species Have Tails?

Bears have been around for millions of years, and during that time their tails have slowly evolved into what we see today.

Across all bear species, they’ve nearly disappeared, indicating that it wasn’t very useful for the large animal.

Do Brown Bears Have Tails?

Yes, brown bears do have tails. They are not the same as most of the animals that live among them, such as wolves or foxes. Theirs is called a vestigial tail and it’s essentially a short flap.

Brown bears evolved from prehistoric bears that had long tails. Over time, the tail has gotten shorter and smaller until it became what we see today.

Do Black Bears Have Tails?

Yes, black bears do have tails. The black bear’s tail can be described as “short and stubby”. It is covered in fur, just like the rest of its body. The fur on their tails is usually black or dark brown in color.

Do Polar Bears Have Tails?

Yes, polar bears do have tails. Polar bears live in very cold climates, meaning their skin flap could actually be important for heat persevation[4]. The tail is not very long, only measuring between three and seven inches in length.

Do Pandas Have Tails?

Yes, pandas do have tails, and they serve the exact same purpose as all other bears’ tails – keeping their anus warm. Pandas only have a tail flap that is around four to seven six long.

Do Bears Wag Their Tail?

Bears do not wag their tail [3]. While many animals use their tails to express feelings or communication, this is not the case for bears.

Bears don’t wag their tails. Don’t do anything active with it. It hangs from their posterior, almost like the fur on their coat.

All bears have tails, but unlike many other mammals, their tail doesn’t serve a higher purpose and isn’t vital for survival. It’s a vestigial tail, meaning it once had a function but has almost disappeared due to natural evolution.

Almost all mammals have tails in some form or another, either short or long. For the most part, they serve a purpose, while for other animals (such as bears) they serve no purpose.