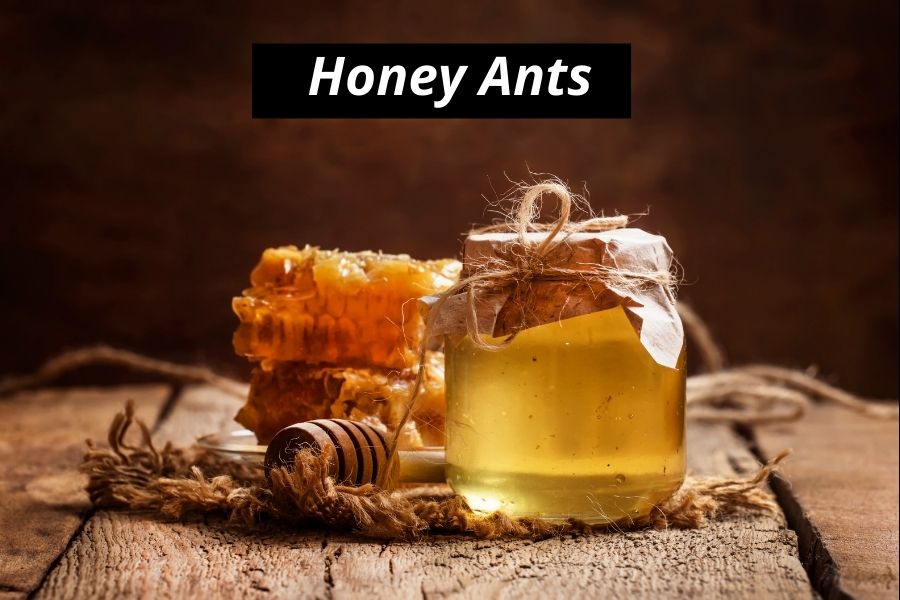 Honey ants are a type of honeydew-producing ant that comes from the family Formicidae.

These ants have been identified as members of the genus Camponotus which contains over 1,000 different species.

Honey ants can be found in many locations around the world but they are most commonly found in:

Honey ants eat honeydew which is secreted by aphids. Honeydew provides all the sugars honey ants need to survive.

In this article, we’ll discuss what honey ants look like, where they live, what they eat, and much more.

What Are Honey Ants?

Honey ants, also called honeypot ants, are species of ants with special workers dedicated to storing food. They’ll be filled with food until their abdomen is about to burst.

The honey ant adaptation is found in multiple species of ants – the above is known as “The Winter Ant”, which is found in North America.

Other species of honeypot ants are:

Most honey ants are around 0.08-0.2 inches long. They’re either light brown or dark brown. The honey ants’ heads and thoraxes are often darker than their abdomens. Honey ants have a smooth and shiny body with strong legs.

These little ants do not have stingers, and their abdomen can look somewhat triangular-shaped.

Where Are Small Honey Ants Found?

Small honey ants are found all over the world. They can be found in some parts of Asia, Africa, Australia, and America. In southeast Asia, they live on trees while in North America they tend to build their nests under stones or inside logs.

Honey ants will typically nest outside, as said under stones or logs, but also in the soil of flower beds with a lot of shade (or in potted plants). When they dig up dirt, they place it in crescent-shaped mounds on the ground.

Honey ants are what’s called “cold-weather” ants since they have no issue living in colder places. They have a very high tolerance when it comes to cold temperatures, which is why they have no issue staying outside during the winter.

For more information: Where do ants live?

What Do Small Honey Ants Eat?

Honey ants are omnivorous, meaning honey ants eat both meat and plant matter. One of their favorite foods is honeydew, a sweet nectar-like substance that’s produced by plant-feeding insects like aphids.

Sugar and sugary substances are what make up the majority of the honey ant diet. They will feed on sat and nectar from flowers, as well as juices from over-ripe fruit.

For protein, they will eat small insects, either alive or dead, but as said, they prefer sugary foods.

1. Honeypot Ants Are Found in Many Places Throughout the World

They can be seen in Australia, Africa, and Eurasia. Honeypot ants get their name because some honey ant workers become bloated with food that is collected for the colony.

These special honeypot ants work as storage, and their abdomen will look like it’s full of honey (because this is their favorite food, it will be mostly full of honey-like substances).

Honeypot ants love sugary food such as sugar, honey, syrup, honeydew, fruits, nectar from plants, and a lot of other similar substances.

This is part of why they got their name – because they love honey.

3. Honeypot Ants Stores Honey as a Way to Provide Food for Other Colony Members

We talked briefly about the special workers of the honey ant species – the living food storage workers.

This type of ants will store away food for future use. They do this to make sure, that they always have food enough.

When it’s time to tap from the storage, other workers will drain them of their liquid food stores to feed the rest of the colony.

Honeypot ants are known for their honey-filled abdomens, which they store honey and nectar in. Honey is used as a food source for the colony when resources are scarce.

Honeypots also serve as storage vessels during times of plenty to carry excess honey back to the nest or hive. This honey can be consumed later by both workers and queens.

5. Honeypot Ants Can Get as Big as the Size of a Grape

When the repletes are filled to the brim, they can be the size of a grape [1]. They won’t be able to move, because their abdomen will be too big for them to carry.

They will usually live deep underground because of this, as they can’t defend themselves or run away if a predator comes by.

Repletes are used for food storage. The way they will pass this on is by regurgitating the food for other ants.

A plerergate is a bigger form of replete. These ants will be fed up, and once they start getting really big, they will hang from the ceiling in chambers deep inside the nest.

A rotund is very similar to the plerergate. These types of honey ants will turn round when filled up, hence the name rotunds.

7. Honeypot Ants Hang From the Ceiling Feed Other Ants

As the repletes or plerergates are filled up with honey, they will go to the depth of the nest. Here, they will divide themselves into different feeding chambers, where they will hang from the ceiling.

This lets other ants in the colony feed off of them easily.

While it may sound a bit weird, honeypot ants are eaten by some people. Some even claim that it’s a very tasty treat and that they have a sweet taste.

When you bite into one, their abdomen will “explode” in your mouth, releasing a bunch of sweet flavors.

René Redzepi, the famous chef, and owner, of Noma (a Michellin restaurant with 3 stars), says that honey ants will provide you with the best honey you’ve ever had. [2]

“A honey ant, this was the best thing I ate in 2017. They’re basically overfed ants, that carry the burden as food storage for the colony, in case of a dry spell. Their abdomen, the size of a small grape is full of sweet and sour nectar. It’s seriously amazing. A traditional food source in some rural parts of Mexico and Australia”

You may also consider: Can you eat ants?

As the special food-storing workers of the honey ant colony fill up, they can get quite big (as stated earlier). Some of the biggest honey ants can weigh up to 1.5 grams.

How to Prevent Honey Ant Infestations

Honey ants aren’t typical intruders, but they will occasionally invade your home. They like nesting in potted plants.

This type of ants will store away They can be extremely difficult to eradicate, but there are honey ant control methods you can use yourself. food for future use. They do this to make sure, that they always have food enough.

If the problem is serious, you can also call for professional help. Exterminators will always know how to tackle an ant infestation.

For more ant prevention tips: How to get rid of ants in your home and garden?

Professional honey ant control services will help keep honey ants out of your home so you don’t have to worry about them damaging property or getting into food supplies.

You can call a local pest control company to hear more about how they intend to handle the problem before it becomes a serious problem.

In the end, honey ants are a fascinating species of ant that have adapted to survive in harsh conditions.

Their diet and behavior are different from other types of ants which adds to their uniqueness.

What makes them truly unique is the way they store food to avoid starving when food becomes scarce. They will feed up specialized workers, to the point where they can’t move.