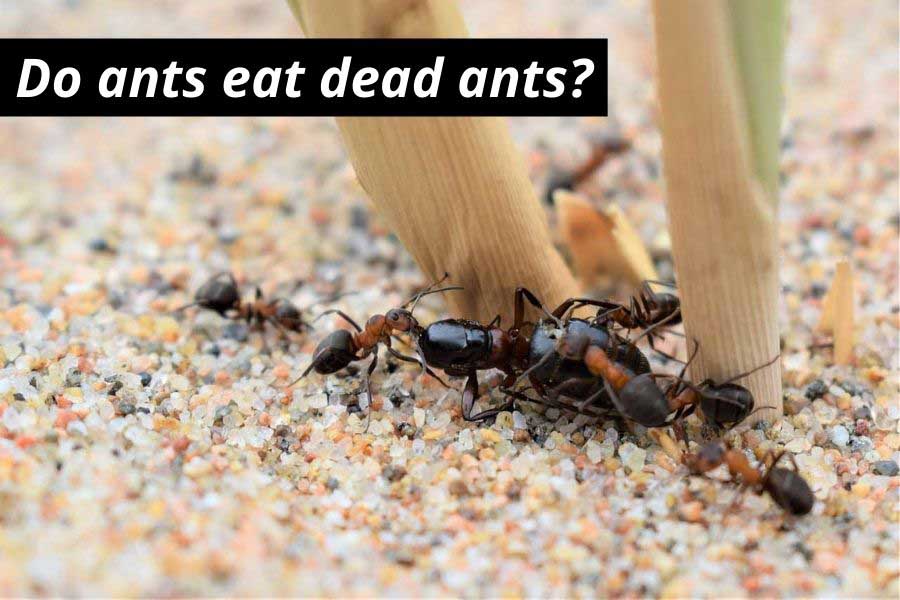 Yes, ants do eat dead ants and other insects. These little insects need a lot of energy, and won’t let food sources go to waste.

Do ants eat dead ants? Do they do anything with their dead, and do they eat other insects?

There’s a lot of questions about how ants behave around dead animals, whether it be their own nestmates or other insects. The truth is, they do a variety of things.

This blog post will provide you with the answers to many of those questions.

It often depends upon the type of ant you’re talking about, as well whether it’s one of their nestmates who’s died, or if it’s an ant from another colony.

The truth is, ants will sometimes eat both their own dead nestmates as well as dead ants from other colonies. The former happens less than the latter.

Some species don’t partake in this behavior at all whereas others do practice cannibalism under certain circumstances. Ants usually only eat their own dead when there’s a food shortage.

Many ants eat their own in order to recycle their brethren into nutrients for the colony. While most workers prefer protein from live sources or meat from decaying corpses or other insects, they sometimes do tend to cannibalism.

Ants will also at times eat their own brood (ant eggs, larvae, and pupae). They do this for the same reasons they turn to cannibalism – food shortage.

What Do Ants Do With Dead Ants?

The most common behavior, when it comes to dead ants, is to carry them away to the colony’s midden. If a worker comes across one of their nestmates, who’ve died, they will carry them away.

Another possibility is of course to eat the dead ants. As we’ve just discussed, this happens within some colonies, but only under certain circumstances.

Why Do Ants Carry off Dead Ants?

Ants carry off the carcasses of their dead nestmates to protect themselves from diseases and contamination. A study shows that ants that don’t remove their dead dies faster. [1]

This behavior comes down to how ants communicate. Ants frequently use pheromones. These are chemical signals they use to communicate about different scenarios (e.g. when ants find food and need to tell the others).

When an ant dies, its body releases a chemical called oleic acid. This lets other ants know that it has died and that it needs to be removed.

Some ants do eat dead animals, while others do not. Some animals prefer to hunt for live prey, others are carrion-eaters, which means they eat meat off of decaying corpses (much like vultures).

A study done in Brazil showed several species of ants being attracted to meat from dead animals. [2]

Insects are great sources of protein and other nutrients for ants. While some try to hunt for live prey, others eat insects that have already died.

Some of the insects’ ants will eat includes:

They will eat almost any insect they can get their hand on. As long as it falls in their taste.

Related: What do ants eat?

Yes, ants do eat dead insects. As stated above, there are many species of ants that eat dead animals, including other insects.

Carrion is a word for “the decaying flesh of dead animals” [3]. This kind of diet is called “Carrion-eating”, where animals will eat the meat off of already dead animals.

There are many animals in the world that practices this form of eating, the most famous being hyenas and vultures, but also including ants, condors, hawks, eagles, Tasmanian devils, coyotes and Komodo dragons.

This is a way for the animals to get the protein they need, without wasting energy on killing the animal themselves.

Some ants don’t like the smell of decomposing corpses, so if you see ants that are dragging around a dead cockroach it might be because they’re trying to move it out of their living area.

Yes, ants eat flies. They don’t hunt for flies because they’re much faster than themselves, and flies can fly away. If they find the fresh carcass of a fly, they will swarm it and take meat back to the colony though.

Yes, ants eat mosquitoes. Ants do eat insects and invertebrates as a part of their diet, and this includes mosquitos. However, much like flies, they won’t hunt for them. Mosquitoes are faster than ants, and they can fly, so it’s almost impossible for ants to catch them.

Yes, ants eat butterflies, but it’s a rare treat for them. Butterflies, like flies, mosquitoes and other flying animals, are difficult for ants to hunt. If ants come across a dead butterfly, they will swarm it and eat it.

Do Ants Bury Their Dead?

Ants don’t necessarily bury their dead, but instead, carry them away to a designated graveyard area. This place is called a “midden” and serves both as the graveyard and the garbage area.

Ants do this to avoid contamination and diseases. One of the important tasks workers are given is to keep their nest clean.

Removing dead workers from the nest is just one part of their cleaning efforts.

Ants do eat dead ants. They are omnivores which means they will eat anything that is available to them at the time, including other insects and their own kind. Some of the insects and bugs that ants eat are cockroaches, flies, butterflies, spiders, termites, and more.

Apart from eating dead ants, workers will also carry away their dead nestmates to a graveyard area called the midden. They do this to avoid diseases and contamination.