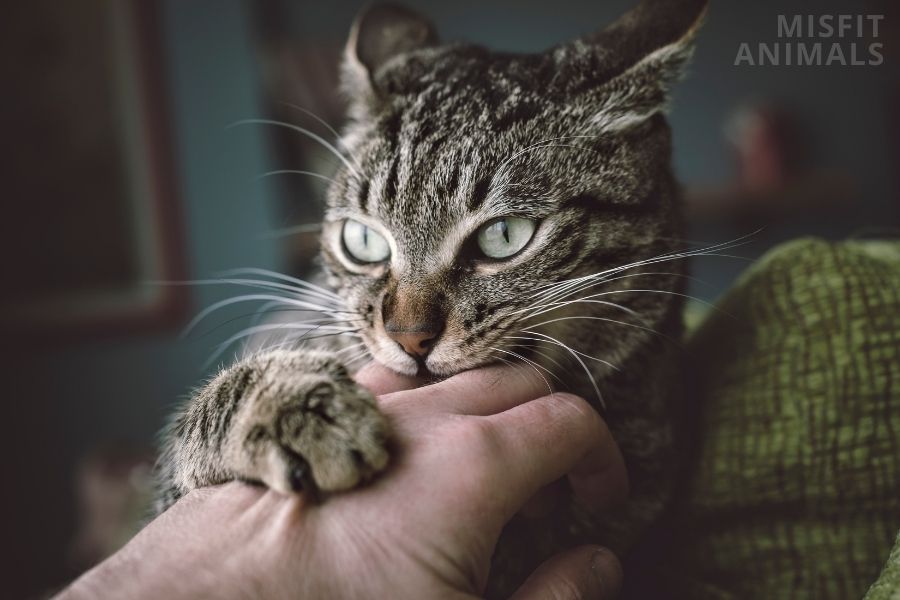 Stubborn is defined as “having or showing dogged determination”.

For people, that often means refusing to change an opinion despite being wrong. In animals, it means to refuse to move or act the way people or external forces want them to.

In this list, you’ll learn about the most stubborn animals.

There are many animals in the world that are known for their stubbornness. From donkeys to mules, these creatures have a reputation for being difficult to manage.

Here are the most stubborn animals:

Bulls are perhaps the most well-known of the stubborn animals. These large, muscular animals are used in rodeos and bullfighting. They’re known for being aggressive and ferocious.

In fact, bulls are often aggressive and are known to attack people who get too close.

But bulls aren’t always aggressive. In some cases, they are docile and friendly. Its when they are agitated or threatened that they are dangerous.[1]

There are few animals more tenacious than the badger. This small but strong animal is known for its determination and single-mindedness.

While this can be admirable, it can also lead to problems when the badger doesn’t know when to quit.

This tenacity is most apparent in the badger’s hunting habits. Once a badger has set its sights on prey, it will not rest until it has caught its prey. This can result in the badger becoming injured or killed in the process.

But this does not deter it from continuing the chase.

The badger’s tenacity is also evident in its burrowing habits. When creating a new burrow, badgers work tirelessly until the job is done.

This can mean working for days or even weeks on end without a break. But the badger will not give up until its home is complete.

The mule is a sturdy animal, a cross between a donkey and a horse. Mules are known for their stubbornness, but they are also intelligent and can be trained to do many things.

Mules have been used as pack animals for centuries, and they are still used today in some parts of the world. They are especially popular in mountainous areas, where their sure-footedness is a great asset.[2]

They are strong and hard-working, but stubborn. This is one of the things that mules are best known for. Mules often refuse to do something if it doesn’t want to.

This is frustrating for their owners, but it also means mules are hard to discourage. Once a mule is convinced to do something, it will stick with it.

There’s no denying that cats can be stubborn creatures. But what makes them so? Whatever the reason, there’s no doubt that cats are some of the most steadfast animals around.

One theory is that stubbornness is in their nature.

Cats are independent creatures who often prefer to do things their own way. This makes make them seem headstrong or willful.

Another reason cats may seem stubborn is that they often refuse to conform to our expectations.

While you may want them to sleep in a certain spot or use the litter box in a certain way, cats don’t always follow directions. They have their own ideas about how to do things.

They say that you can lead a horse to water but you can’t make it drink. The same could be said for cows.

Cows are some of the most stubborn animals around, and they’re not known for being particularly compliant.

So why are cows so stubborn?

For one, cows are herd animals. They’re used to being in close quarters with other cows, and they like having a leader to follow. When you try to get a cow to do something it doesn’t want to do, it’s natural for the cow to resist.

Another reason cows are so stubborn is that they’re very food-motivated. If a cow thinks there’s food on the other side of a fence, it’s going to be pretty difficult to get it to turn around and go the other way.

Cows are also curious creatures, so if they see something interesting on the other side of a fence, they’re likely to want to investigate.[3]

There are few animals on this earth as impressive and stubborn as the elephant. These massive creatures have been revered and feared by humans for centuries, and with good reason.

Not only are they some of the largest animals alive today, but they’re also strong and intelligent.

But it’s their stubbornness that really sets them apart. Elephants have a well-earned reputation of being difficult to control. They’re not afraid to use their size and strength to get their way.

This is a problem for humans that don’t know how to work with them. But it’s also one of the things that make elephants so fascinating. It shows their intelligence.

The tiger is one of the most iconic and feared animals in the world. These creatures are known for their strength, power, and ferocity.

But they’re also renowned for their stubbornness. As they are cat-like animals, it makes sense that both tigers and house cats are stubborn.

Tigers are notoriously difficult to train and work with, and they often do things their own way, regardless of what humans may want them to do.

This is a problem for those who try to handle them.

The rhinoceros is a massive, prehistoric-looking creature that has been around for millions of years. They are known for their thick skin, which is used to protect them from predators, and their long horns, which are used for fighting and defense.

Rhinos are some of the most stubborn animals on the planet, and they are not afraid to use their horns to get what they want.

These massive creatures can weigh up to two tons, and they can grow up to six feet tall at the shoulder. Despite their size, rhinos are fast. They can reach speeds of up to 35 miles per hour.

Most people of goats as stubborn animals that like to butt heads, but there’s more to these creatures than meets the eye.

For one, goats are intelligent animals. They’re able to learn tricks and even remember them for years.

Another thing that makes goats so interesting is their diet. Goats eat anything they come near, including garbage and other things that most animals wouldn’t touch.

This makes them versatile creatures that can survive in any environment.

Goats are also known for their strong sense of smell. They use this sense to find food and water, and even to track down other goats. This makes them excellent herd animals.

The wolverine, also known as the glutton, carcajou, skunk bear, is the largest land-dwelling species of the weasel family.

Wolverines are mid-sized animals with stocky legs, broad round heads, small eyes, and short rounded ears. They have five toes on each foot with semi-retractable claws that allow them to climb and grip prey.

They are sexually dimorphic, with females typically being 25% smaller than males.

Wolverines are found in North America, Europe, and Asia. In North America, they range from Alaska and western Canada through the contiguous United States to northern Mexico. They are also found in Scandinavia and Russia.

Wolverines are solitary animals that occupy large home ranges. Females have smaller home ranges than males, which overlap with those of other females. Wolverines den in tree cavities, stumps, logs, or under rocks.

What Is the Most Stubborn Animal?

The most stubborn animal is the wolverine. Wolverines are mid-sized animals with stocky legs, broad round heads, small eyes, and short rounded ears. They have five toes on each foot with semi-retractable claws that allow them to climb and grip prey.

What Is the Most Stubborn Dog Breed?

The most stubborn dog breed is the Akita. Akitas are large, spitz-type dogs that originated in Japan. They are loyal, protective, and territorial by nature. Akitas are also known for their stubbornness and independence.

What Is the Most Stubborn Cat Breed?

The most stubborn cat breed is the Siamese. Siamese cats are known for their intelligence, playful personalities, and vocal nature. They are also stubborn and independent.