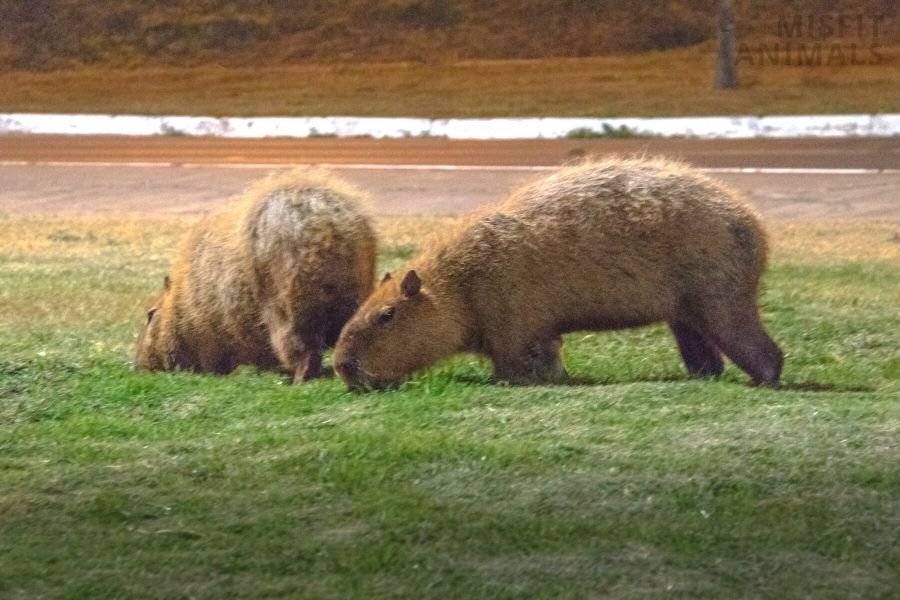 We all know about lions, tigers, and wolves, walking around with tails, but what about the animals that don’t have tails?

Believe it or not, there are many fascinating creatures out there without tails. Many of these had tails once but lost them through evolution.

Here are 9 interesting animals without tails.

There are a number of animals without tails, including some mammals, reptiles, and amphibians. While the loss of a tail can be due to injury or disease, some animals are born without tails.

Here are a few tailless animals that you might find interesting:

The American black bear (Ursus americanus) is a medium-sized bear native to North America[1]. It is the continent’s smallest and most widely distributed bear species. While they do have a small skin flap at the back, it’s not exactly a tail. Black bears have a vestigial tail.

The theory is that bears once had tails, thousands of years ago, but they were lost because they didn’t serve a purpose.

Black bears are omnivores, with their diets varying depending on season and location. They typically live in largely forested areas but do leave forests in search of food.

Both male and female black bears can stand upright on their hind legs, which they often do to get a better view of their surroundings. They sometimes bluff charge when threatened.

Although generally slow and clumsy on land, black bears are very good swimmers and can run up to 35 mph (56 km/h) over short distances. They are proficient climbers and often escape danger by climbing trees.

Notail sheeps are a type of sheep that, as their name suggests, do not have tails. They are native to the island of New Zealand and are considered to be a pest by many farmers due to their ability to destroy crops.[2]

They are typically white in coloration, although some may have brown or black markings. They have short legs and a short head, with small black eyes. Both male and female Notail Sheep are hornless.

Notail Sheep are considered to be a nuisance by many farmers due to their habit of eating crops. They are also known to carry various diseases that can infect other animals, including humans. As such, they are often culled by authorities in order to keep their populations under control.

Araucana chickens are a breed of chicken that is notable for its lack of a tail. The Araucana is an ancient breed, and was once quite common in South America. However, the Araucana is now considered to be a rare breed, and is listed as “critical” by the American Livestock Conservancy.

There are several theories as to why the Araucana chicken does not have a tail, including a genetic mutation, or that the breed was developed in an area where there are no predators that target chickens by their tails.

Regardless of the reason, the Araucana is an unusual and interesting breed of chicken.

The Araucana is a small to medium-sized chicken and can be either auto-sexing or non-auto-sexing. The auto-sexing Araucanas have a gene that causes the males and females to look different at hatch. The most well-known variety of Araucana is the Easter Egger, which is a cross between an Araucana and another breed of chicken.

Manx cats are a tailless breed of cat that originates on the Isle of Man. The Manx is one of the oldest natural breeds of cats and is also one of the most popular in the United States.

These cats are known for their unique appearance, which includes a round head, short legs, and a lack of a tail[3]. Manx Cats come in a variety of colors, including black, white, and red.

Manx Cats are also known for their friendly personality and their love of people. They make great pets for families with children. If you are considering adding a Manx Cat to your family, be sure to visit your local animal shelter.

The Barbary macaque (Macaca sylvanus), also known as the Barbary ape or magot, is a macaque species native to the Atlas Mountains of Algeria and Morocco. They are listed as Endangered on the IUCN Red List since 2008, as their population declined by more than 50% over the previous 25 years.

The Barbary macaque is one of the best-known Old World monkeys. It is recognizable by its barrel-like body, lack of tail, and pale to reddish-brown fur. The face is pinkish-white in color, and the hair around the face is lighter than the rest of the body.

Barbary macaques are social animals that live in troops of up to 30 individuals. They are diurnal (active during the day) and spend most of their time on the ground, where they forage for food.

Bonobos are a species of great ape that is native to the Congo Basin in Central Africa. They are the closest living relatives of humans, sharing 98.7% of our DNA. Bonobos are also known as pygmy chimpanzees.

This species of ape is endangered; there are only an estimated 10,000-20,000 individuals left in the wild. The primary threats to bonobos are habitat loss and bushmeat hunting.

Bonobos are an interesting species of animals due to their lack of tails. Bonobos are the only apes that do not have tails. This is likely because they don’t need a tail for balance.

Tails are an important part of an animal’s anatomy. They help with balance, and communication, and are used for locomotion. But not all animals have tails. The fruit bat, or flying fox, is one such example.

There are over 1,200 species of bats, and fruit bats make up a large proportion of that number. They are found in tropical and subtropical regions of the world, and their diet consists mainly of fruits, flowers, and leaves.

Fruit bats are some of the largest bat species, with a wingspan that can reach up to six feet. They are nocturnal animals, meaning they are active at night.

One of the most distinctive features of fruit bats is their lack of a tail. This is thought to be an adaptation that helps them maneuver while they are flying and feeding on fruits.

Capybaras are animals without tails. Most notable for their size, they are the largest rodents in the world. They live in Central and South America, and their diets consist mostly of plants. Although they are proficient swimmers, they are not particularly known for their agility on land.

They are social creatures and often live in groups of 10 or more. They are great at communicating with each other, using a variety of sounds and body language to do so. Although they are not aggressive animals, they can be dangerous if provoked.

The name “capybara” comes from the Tupi word “kapivara”, which means “water hog”. They are closely related to guinea pigs and rock cavies, and are sometimes kept as pets.

Tiliqua Rugosa, also known as blue-tongued skinks, are a type of lizard that is distinguished by their blue tongues. These lizards are native to Australia and can grow to be about two feet long. Although they typically have tails, there are some instances in which they are born without them.

There are a few different theories as to why some Tiliqua Rugosa are born without tails. One theory is that it could be due to a genetic mutation. Another possibility is that it is the result of environmental factors, such as inbreeding or exposure to toxins.

Regardless of the cause, lizards without tails are typically healthy and can live long happy lives.

While losing a tail is not harmful to Tiliqua Rugosa, it can be detrimental to other lizard species. For example, some lizards use their tails as a means of self-defense. When predators try to attack them, they can detach their tails and make a quick getaway.

Do All Mammals Have Tails?

No, not all mammals have tails. Some groups of mammals, such as primates (including humans) and bats have lost their tails through evolution. desert-dwelling mammals such as camels and kangaroos also tend to have shorter or non-existent tails. But many other types of mammals still have tails, including rats, mice, rabbits, squirrels, and beavers.

Which Rodent Has No Tail?

The Capybara is a large rodent that is native to South America. It is the largest member of the rodent family and can grow to be up to four feet long. Despite its size, the Capybara does not have a tail.

Why Do Animals Have Tails and Humans Don’t?

The answer lies in our evolutionary history. Over millions of years, the human lineage has lost its tail through a process called devolution.

The first known hominids, or human-like creatures, were tailless. This is likely because they lived in trees and didn’t need a tail for balance. As hominids began to walk on two legs and spend more time on the ground, they likely lost their tail because it was no longer necessary.