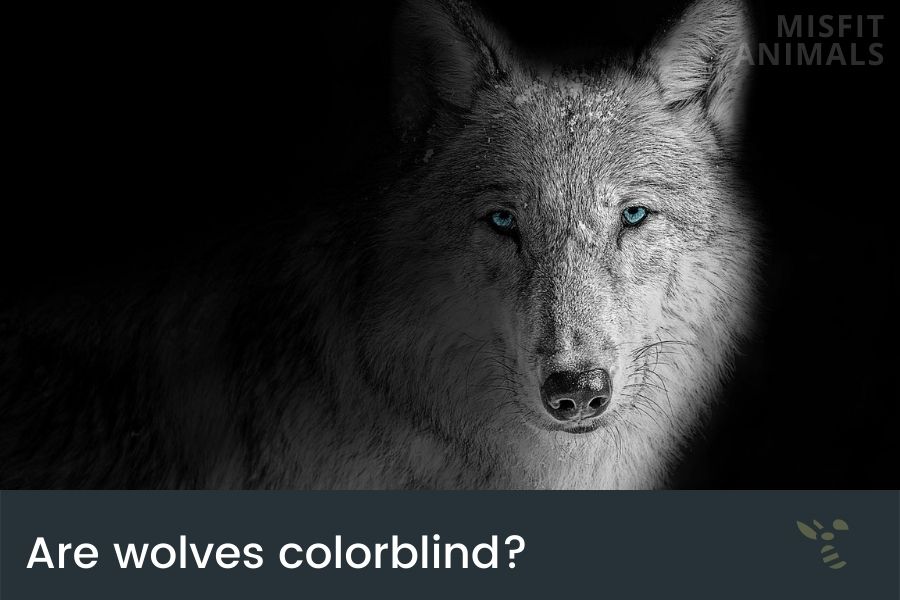 Wolves are great hunters, and as such, they have to be able to see. But can they see color?

Wolves don’t see color like humans do. Their cone photoreceptors (the receptors responsible for detecting color), can’t process colors other than yellow and blue. On the other hand, wolves can see better in dim light.

But how do wolves then see the world?

In this article, we’ll talk more about how wolves see color if wolves are colorblind, and how their eyes work.

Only 3 % of retinal cells in dogs are cone photoreceptor cells, the cells responsible for processing colors.

For example, wolves can easily differentiate between yellow and blue because those two are on either side of the color spectrum wolves can see.

Wolves can see color, but they are partially colorblind. They can’t see the same colors as humans. Their color receptors can only differentiate between yellow and blue. Wolves have strong receptors for black and grey.

The reason for this is a lack of cone photoreceptors, which are responsible for detecting colors. Instead, wolves have more rod photoreceptors.

Rods are used for seeing in dim light. [1]

Wolves don’t rely on colors when hunting. Instead, they rely on other senses (hearing and smelling). Wolves are also good at detecting motion, helping them spot prey when hunting.

What Colors Can Wolves See?

In other words, wolves have cone photoreceptors for two colors: yellow and blue.

It is believed that wolves are unable to tell the difference between green and red colors.

What Colors Can Wolves Not See?

Wolves are unable to see the red, orange, and green colors.

They are partially colorblind which means they only have the ability to see blue and yellow colors. What wolves lack in color vision, they make up in other ways, like the ability to spot prey at long distances.

Wolves are also able to make out dark shades of grey and light tones very well. This helps them see in the dark, or better see prey hiding in dark cavities.

Do Wolves Have Good Eyesight?

Wolves have good eyesight miles are not as good as other animals. Compared to human sight, wolves are also lacking in most aspects.

Wolves have 180 degrees field of view, with eyes facing forward. This is typical for hunters.

As the wolves are hunters, they don’t need to worry about any predators attacking from behind. Instead, they can focus on their prey in front of them.

Animals that are hunted often have eyes placed on the side of their head (like deer or rabbits), making it easier to detect predators before they attack.

Wolves are nocturnal hunters, so their eyesight is adapted for nighttime hunting. Their large pupils allow more light to enter the eye and reach the retina (light-sensitive part of the back of the eyeball).

Wolves have special reflective cells called tapetum lucidum. These reflect light back where it came from, making wolves much better at seeing in the dark.

This also makes wolves’ eyes twice as efficient at absorbing light as are human eyes. [2]

Apart from their enhanced night vision, wolves can also see very far. Their narrow vision allows them to better spot prey far off in the distance.

One aspect of wolves’ sight that’s lacking is the sharpness. Wolves won’t see details as well as humans. They can easily distinguish shapes, but won’t notice details. This isn’t needed, as wolves don’t rely on small details when hunting.

In addition, wolves have evolved an ability known as lateral inhibition in their retinal cells which are sensitive to color.

This ability allows them to determine the edges of objects, allowing wolves in low light conditions like starlight nights to be able to see prey animals that are sometimes standing perfectly still.

Can Wolves See in the Dark?

Wolves are known for their excellent night vision. Their ability to see in the dark is superior to most animals found on earth, due to the Tapetum Lucidum.

The Tapetum Lucidum is a reflective cell in the back of their eye that reflects light back where it came from. This process increases the amount of light received by the photoreceptors.

This is also found in dogs, cats, and even some spiders.

The Tapetum Lucidum is also why wolves’ eyes shine at night. The very small amount of light is reflected, making wolves’ eyes light up

Humans, in comparison, have very poor night vision. It’s estimated that wolves can see several times better than humans in the dark, even though they are bested by the owl.

How Far Can Wolves See?

It is believed that wolves can only see details up to 75 feet, though they can detect motion much farther.

It’s unknown how far away wolves can detect motion, though some sources say that they can spot a moving deer up to a mile away, even at night.

When wolves hunt, they don’t rely much on their sight to find prey. For this, they’ll use their sense of smell and hearing. Wolves frequently use their noses to detect scents, as well as their ears to hear.

They can even rotate their ears in the direction of sounds.

Wolves can smell up to 1.5 miles, and they can hear up to 10 miles in an open field.

Other Animals That Are Colorblind

Other similar colorblind animals include:

Wolves are not fully colorblind, but they are red-green colorblind. They can see yellow and blue colors well. Wolves have improved night vision due to the Tapetum Lucidum, which reflects light back through the eyes.

This process affects their ability to see colors, as well as how sharp their vision is. While wolves can see in the dark, they don’t see details very well.