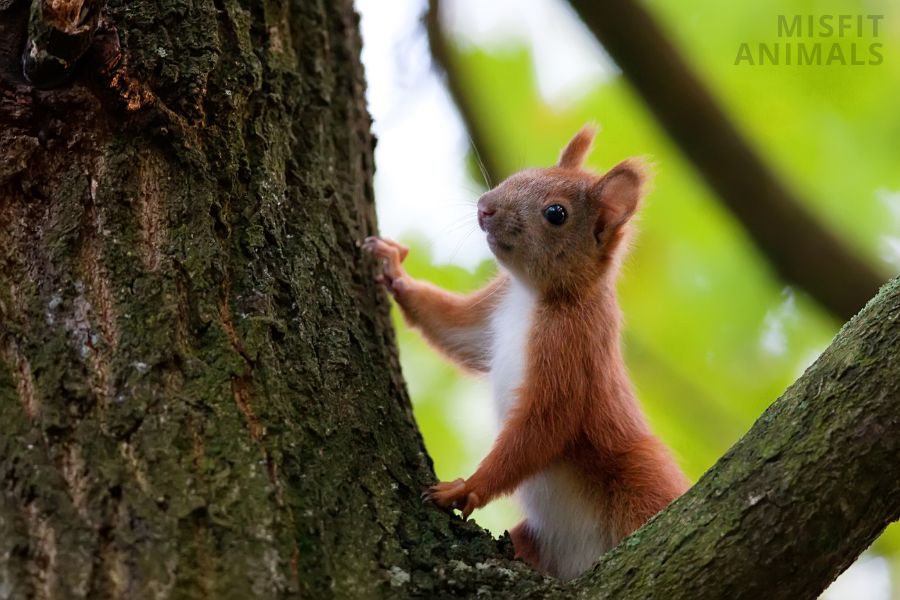 Squirrels are found all over the world, including in the United States of America. Hawaii is the only state in the US that doesn’t have squirrels.

The difference between states is their law on hunting, keeping, and interacting with these small rodents.

In this article, we answer these questions about squirrels and squirrel hunting in Virginia.

Types of Squirrels in Virginia

There are five types of squirrels in Virginia:

Eastern gray squirrels (Sciurus carolinensis carolinensis) in Virginia have pale grey to yellowish brown coat fur that is often white-tipped. They have bushy white-tipped grey tails and creamy white fur under their chin, on their belly, and on the insides of their legs.

Gray squirrels are larger than the red squirrel and smaller than the fox squirrel:

There is no difference in size and color between males and females.[1]

Where to Find Eastern Gray Squirrels in Virginia

Gray squirrels are found throughout the southeastern quarter of Virginia in forests, city parks, and suburbs.[2]

The red squirrel (Tamiasciurus hudsonicus loquax) is about half the size of the eastern gray squirrel, making it the smallest tree squirrel in Virginia.

They have reddish-brown fur coats with creamy white undersides and white rings around the eyes. During the winter, their fur is thicker and they grow tufts on their ears.

Where to Find Red Squirrels in Virginia

Red squirrels are found in the central and northern parts of Virginia in coniferous or mixed forests.[3]

They are larger than the gray squirrel and smaller than the typical niger. Fox squirrels have buff-brown fur with an orangish-brown underside.

Where to Find Fox Squirrels in Virginia

Fox squirrels can be found in most counties west of the Blue Ridge mountains in Virginia.[4]

Their total length of 7.7-10 inches and weigh between 1.6-3 ounces. There is no difference in size between male and female squirrels.

They are called flying squirrels because of their ability to glide, using a membrane of skin that extends from the wrist to the ankle to create an airfoil when extended.[6]

Where to Find Southern Flying Squirrels in Virginia

Southern flying squirrels are found in deciduous forests throughout Virginia, with the exclusion of the westernmost tip.[7]

Where to find Northern Flying Squirrels in Virginia

These are found in Virginia’s coniferous forests in Highland and Montgomery Counties. Small populations have been found at high altitudes in the South of Pennsylvania.

To encourage these squirrels to breed, nesting boxes have been placed in 10 counties of western and southwestern Virginia.[10]

Virginia’s Squirrel hunting season is open from late summer (September) through fall (October and November) and winter (December through February) and into late spring (early June). Only red squirrels, eastern gray squirrels, and fox squirrels can be hunted.

Squirrel hunting is not permitted on National Forest land during the spring (June) season.[11]

When Is Virginia’s Squirrel Hunting Season?

Fox squirrels can only be hunted select areas:

Why Is Hunting Squirrel Permitted in Virginia

Squirrel hunting is legal in Virginia because the sale of hunting permits helps support the states’ forest restoration efforts.

Virginia’s state forest land covers about 60,000 acres and is cared for by the Virginia Department of Wildlife Resources (DWR) and the Department of Forestry.

Red, gray, and fox squirrels are abundant in Virginia. And because they are quick, they are difficult targets to hit. The sport attracts hunters on the lookout for a challenge and the revenue from the issue of hunting permits helps boost the state forest funding.

Although we call them “flying” squirrels, they don’t fly but rather glide. They do this by stretching out their arms and legs so that the membrane of skin connecting the squirrels’ wrists to their ankles acts like a built-in parachute.

Flying squirrels can glide across 262.4 feet.

The Conservation of Flying Squirrels

Thanks to efforts to protect and restore Virginia’s red spruce-northern hardwood forest, the northern flying squirrel’s habitat, the squirrel population has recovered.

In 2013 the West Virginia northern flying squirrel was taken off the endangered list.[14]

When Squirrels in Virginia Are Pests

Squirrels are seen as pests when they steal food from pet or bird feeders and nest in attics.

Some people see squirrels as sweet woodland creatures. Some see them as nothing but pesky rodents. The latter is particularly true when squirrels move into homeowners’ attics or steal food from pets and bird feeders.

Squirrels nesting in attics is more than a nuisance. They cause damage by ripping up insulation and creating fire hazards by gnawing through electrical cables.

When people in Virginia complain about squirrels in their attic, it’s most likely flying squirrels that have moved in. They are nocturnal and can be heard rustling around in roof eaves or attics at night.

How To Prevent Squirrels From Moving Into An Attic

Here are tips to prevent and rid roof eaves and attics of squirrels:

How To Prevent Squirrels From Stealing Pet or Bird Food

Are There Flying Squirrels in Virginia?