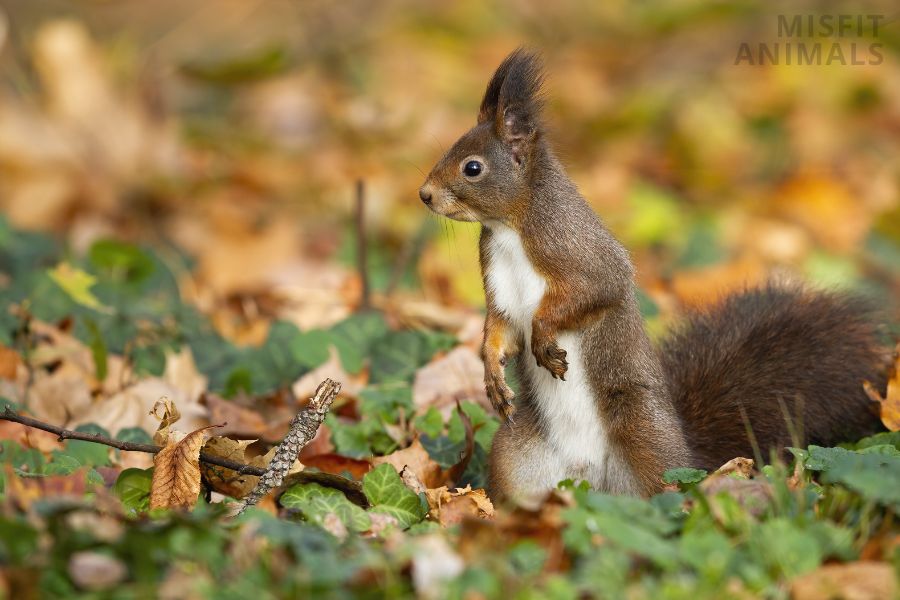 There is one species of squirrel in Germany: the Eurasian red squirrel. These are native to the country. European ground squirrels used to live in Germany as well but died out.

Germany is famed for their fairytale forests, like the Black Forest, so it’s easy to assume that the squirrels there are thriving.

However, Germany’s native tree squirrels are under stress and the country already lost a species of native ground squirrels in the 1980s.

That leads to the question: What types of squirrels are native to Germany and why are they under threat?

In the following article, we answer these questions and look at what is being done to protect native squirrels in Germany.

The Eurasian red squirrel (Sciurus vulgaris) is native to Germany. They are the most common European squirrel native to Central Europe.

Eurasian red squirrels are tree squirrels found in deciduous and coniferous in Europe. They build their nests in forests with mature trees that provide them with an abundance of seeds or acorns.[1]

In comparison to their body size, their paws are large. Their large paws help them jump from tree to tree.

They have long tufts of hair on their ears and long furry tails.[2] Although they are called red squirrels, their coat color varies more than any other mammal in the Palearctic region.

All Eurasian red squirrels have creamy white fur on their bellies, but their coat color ranges depending on the area they live in and the season. These coat colors include

In winter, their coats are thicker, grayer, and cover their feet. Their ear tufts also grow longer.

Another squirrel native to Germany is the European ground squirrel (Spermophilus citellus).

These burrowing squirrels were eradicated from Germany in the 1980s. The last German subpopulation of European ground squirrels was found along the Ore Mountains that run along the German-Czech border. [3]

Related: Tree Squirrels vs. Ground Squirrels: How To Tell The Difference

Are There Gray Squirrels In Germany?

No, there is no evidence that the American gray squirrel has found its way to Germany yet.

There are concerns that the Eastern gray squirrels will migrate to Germany and wreck havoc on the country’s red squirrel population and forest biodiversity.

The threats facing native squirrels in Germany are loss of natural habitat, urbanization, and the threat of invasive Eastern gray squirrels.

In Germany, squirrels are protected under the Federal Species Protection Ordinance which aims to protect biodiversity.[5]

Although they are not listed as endangered, the IUCN Red List of Threatened Species has noted that Eurasian red squirrel populations are in decline. [6]

It is an increasing challenge to protect native squirrels from the following threats:

Germany’s forests have lost more than one million established trees since 2018. This is due to climate change-related drought, winter storms, and bark beetle plagues.[7]

With German forests under threat, animals that can tolerate living near humans are moving into urban areas. They do so in search of food and shelter.

Life in cities does pose new dangers for squirrels, particularly the threat of being run over by cars.

A squirrel bridge is a piece of rope tied from one tree to another tree across a busy road, offering squirrels a safe way to get across a road.

According to Aktion Tier, more wild animals are living in the city than in natural environments.[9]

3. The Threat of Eastern Gray Squirrels

The ESI says that the gray squirrels pose one of the greatest threats to European biodiversity. They damage trees by removing bark and displacing native red squirrels but out-competing them for food.

There is concern that a colony of gray squirrels in Ticino Valley in Lombardia, Italy, can spread into Switzerland and then into Germany in the next 10 -20 years.[10]

The European Squirrel Initiative calls on European countries to persuade Italy to eradicate their invasive American gray squirrel population before they spread to France, Switzerland, and Germany.

Squirrels native to Germany are under threat. The good news is that there is a drive to protect them under the Federal Species Protection Ordinance.

Animal conservation organizations, like the Aktion Tier and the European Squirrel Initiative, are raising awareness about the need to conserve Germany’s Eurasian red squirrel and stop invasive Eastern gray squirrels from displacing this native squirrel population.

What Color Are the Squirrels That Are Native to Europe?

The Eurasian red squirrel is a tree squirrel that is native to Europe. They all have creamy white underside fur, but their coat color ranges from orange-red, reddish-brown, brown, and gray-brown to black. The color of their coats differs according to season and area.

How Are People Trying To Protect Native Squirrels In Germany?

Conservations are working to raise awareness about the need to protect Germany’s native Eurasian red squirrels. In urban areas, animal activists have installed squirrel bridges (a rope tied from a tree on one side of a busy road to a tree on the other side) to reduce squirrel traffic fatalities.