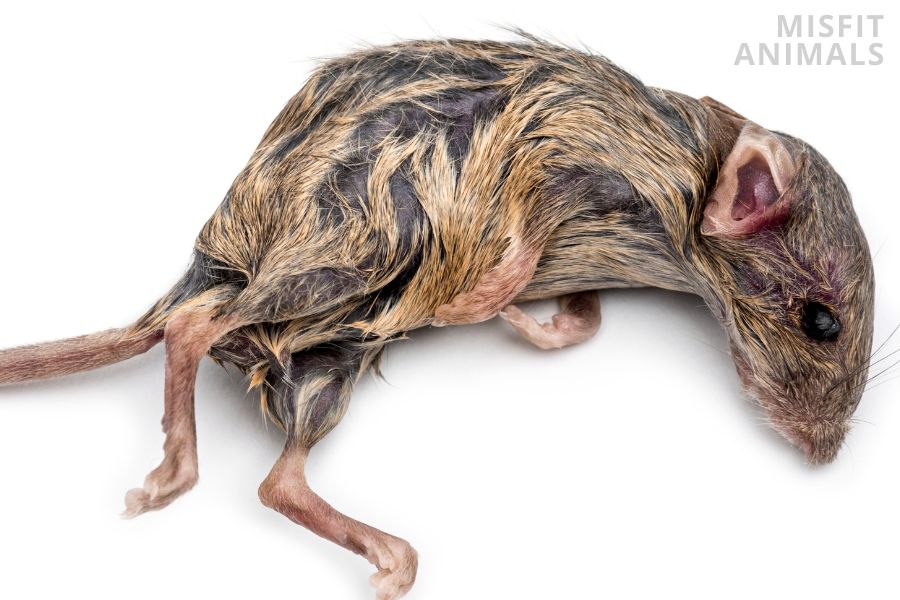 Yes, rats have bones. Rats are vertebrates with a skeletal system made up of bones connected by cartilage. Their bones are as stiff, yet rats can squeeze through holes or spaces smaller than their bodies.

The misconception that rats do not have bones springs from the fact that they can squeeze through holes smaller than themselves.

Rat-proofing your home is difficult because of its skeletal structure.They can make their way to your house through the smallest openings.

In this article, you learn about rats’ bones, how many they have, and how they work.

The skeleton of rats consists of bones connected to each other by joints and cartilage.

Rats have a series of bones[1] in their head:

The spinal bones are called vertebrae. Rats have in total around 57 vertebrae.

There are five categories[2] of vertebrae:

Rats’ ribs are thin and curved bones that articulate with the sternum and spine. Together they form the rib cage.

The sternum is an elongated, flat bone with a crest on its surface.

Together all three form the pelvic girdle. It connects the hind limbs to the trunk.

The shoulder bones consist of the following bones:

Together they form the scapular girdle (pectoral girdle) and play a role in connecting the anterior limbs to the trunk.

The forelimb skeleton consists of the following bones:

The hind limb skeleton consists of the following bones:

How Many Bones Does a Rat Have?

Rats have about 223 bones. The number of bones depends on the species and the length of their tail. These animals are vertebrates that have a body made up of bones and muscles.

Do Rats Have Bones in Their Tails?

Yes, rats have bones in their tails. The number of bones varies depending on the species. The tail bones are caudal vertebrae. Common rats have 27-30 tail bones (Rattus rattus and Rattus norvegicus).

The tail is not covered with scales (as many people think) but with fine hairs. Rats’ tail serves several purposes[6] and roles:

Do Rats Have Pneumatic Bones?

No, rats do not have pneumatic bones. The bones of rats are full of marrow. Pneumatic bones are bones full of air. These are important for bird respiration.

How Big Can Rats Get?

The size of a rat depends on several factors. Common rats can reach a length of 10 inches (25 cm) without the tail and a body weight of 1.5 lbs. (700 g). Their tail is as long as their body, or slightly shorter. Black rats have a shorter tail compared to brown rats.

Many factors determine how big rats grow in adulthood:

The smallest rat (Osgood’s rat from Vietnam) is about five inches long, while the largest one (Sumatran Bamboo Rat from China and Sumatra) can grow up to 20 inches long without the tail.

Common rats, which are often found in homes or on the streets, reach about 10 inches long and 1.5 lbs body weight when fully grown.

Although rats seem big to sneak through small holes, they have a long, flexible skeleton that allows them to do so.

Related article: How Big Do Rats Get?

How Can Rats Fit Into Small Spaces?

Rats can fit into small spaces because they have tilted collarbones. This allows them to squeeze into small holes or narrow spaces. They have a long, narrow body and strong legs that also help push them through small openings.

This ability is not seen in all rats. Fat ones or larger species are not able to pass through the same small holes that smaller rats can get through.

Obese rats tend to concentrate the fat around the abdomen, which leads to an inability to pass through small holes and narrow spaces.

How Small of a Hole Can a Rat Get Through?

If you want to buy to protect your house and garden from rats, consider the size of the wire mesh you’re going to buy.

Wire nets with 1×1 inch holes are too large to keep rats away. The most suitable are those with holes of 1 by ½ inch or even ½ by ½ inch.

Can Rats Squeeze Under Doors?

Rats squeeze under doors the same way they pass through small holes and cracks.

The bones of rats are similar to those of humans. They have a skeleton consisting of the head, spine, and limbs, with bones full of bone marrow.

Here are the differences between the bones of rats and humans: