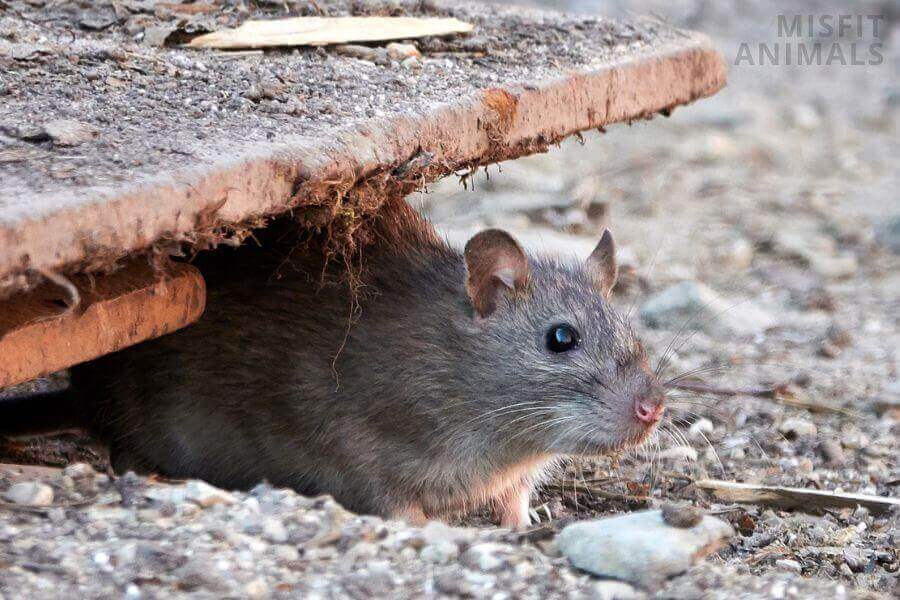 Rats adapt extremely easily to all environmental conditions, even when there is not enough food. They can travel long distances when hungry to look for food and populate new regions, sometimes in daylight.

They often become a problem when they overpopulate a city or suburb.

But you don’t have to worry if you see rats swarming during the day. Lack of food usually leads to cannibalism, resulting in the rats killing and eating each other. This leads to a balance in the number of rats.

In this article, you will find when rats are most active, if rats are nocturnal, if they come out during the day, and much more.

Do Rats Come Out During the Day?

Yes, rats do occasionally come out during the day. They do so for various reasons, especially if they can’t find food at night. They stay clear of places with a lot of people or noise.

You can sometimes see rats on the streets during the day.  They come out to look for food or if they are chased out of their nest by predators.

Rats come out during the day in the following places:

They are often forced to come out during the day to look for food and water if they live near places that are crowded at night.

They often look for the following in gardens:

Other times, rats come out during the day when their nests are overcrowded. If there’s no space in the nest, or if there’s not enough food for all the rats, they’ll head out in search for more.

When Are Rats Most Active?

Rats are most active around sunset. They hide from predators during the day and come out around nightfall. That’s why it’s more common to see rat markings than the actual rats.

Rats are nocturnal creatures[2] and are most active between dusk and dawn[3]. They come out at night to look for food or travel long distances.

This way, they can protect themselves from diurnal predators and larger animals:

Another reason why rats are more active at night is that they can detect ultraviolet light. The ratio of ultraviolet light to visible light increases significantly during the early morning and at dusk. Rats’ urine becomes visible in this light and can help them trace each other.

When Are Pet Rats Most Active?

Signs and Marks Rats Leave Behind

Most of the time, rats stay hidden. But they do make their presence known through marks[4] they leave behind:

Rats are dirty with grease and dust and leave marks on the surfaces they walk on, the corners of the walls, etc.

Rats grow their teeth continuously and need to gnaw to keep them the right size. They gnaw on various items, packages, furniture, cabling, or wires. Rats cause fires when they damage electrical cords.[5]

Brown rats are known for their skill in digging holes. They dig holes in the floor, garden, garage, etc., to build their nest and hide food.

Rats build their nests in warm places away from predators, humans, or noise. They use shredded newspapers, magazines, loft insulation, cardboard, or other soft material.

If you have rats in the house, check behind the items in your kitchen first.

Rats leave dirt marks on surfaces with their tails and feet. They also leave traces where there is a lot of dust.

Rats produce a lot of scratching noises. If you hear scratches at night coming from your walls, floors, or furniture, you may have rats. They can also be heard running under your floor or across the room.

Where Do Wild Rats Live During the Day?

Common rats that infest cities and suburbs, such as black and brown rats live in the following places:

Other species of wild rats live in:

Where Do Roof Rats Live During the Day?

Roof rats live in their nests during the day. They build nests indoors, under buildings, or in piles of garbage or wood. As they are excellent climbers, they can often be found at the top of structures, such as building roofs.

The roof rat (black rat) can exceed 40 cm in length. It has large eyes and ears and a sharp nose. Its body is smaller and thinner than that of the Norwegian rat (brown rat).

Rooftop rats are nocturnal animals. They can come out during the day to look for food or if they feel threatened in their hiding place.

How to Keep Rats Out of Your Garden

To keep rats away from your garden, you can plant mint, adopt a cat, or use rat traps. You can also put the pet food and garbage in places hard to reach for rats.

Here is what you can do to keep rats away from your garden:

Rats like to hide in isolated areas such as roofs, attics, under the floor, walls, basements, etc. They also like wet places such as drains and sewers. Rats also dig holes in the ground in your garden.

Do Rats Only Come Out at Night?

No, rats do not come out only at night. Rats can also come out during the day, which is normal behavior. They usually do this when they lack food, their nest is too crowded, or are attacked by predators.

What Months Are Rats Most Active?

Rats are most active in late summer and autumn. In these months, they gather as much food as they can to survive the winter. Rats do not hibernate, but they like warm places and

Rats do not hibernate, but they like warm places. In order not to have to go out in the cold in winter, they prefer to gather food in time.