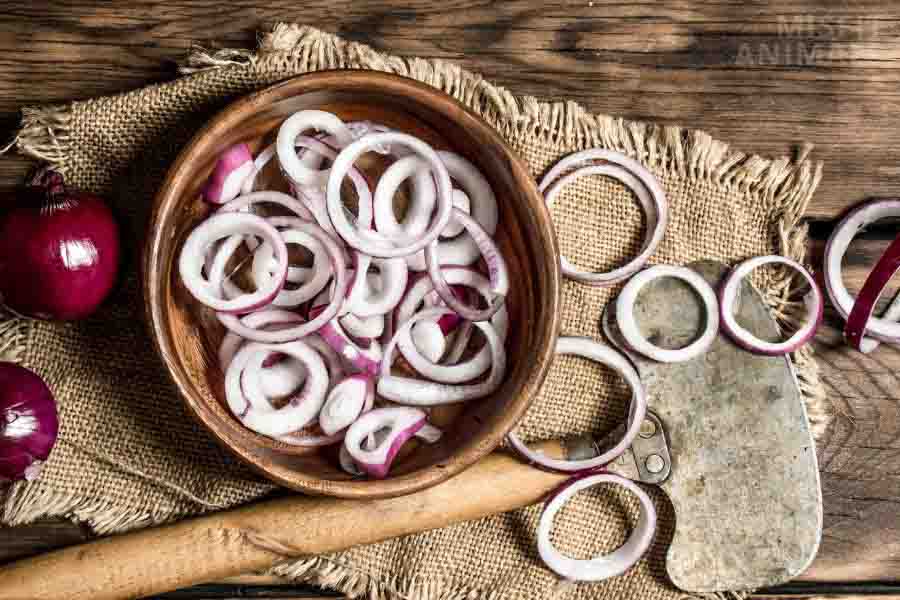 Yes, rats can eat onions if they are prepared correctly. Raw onions can cause anemia, stomach problems, and death. Cooked onions are ok for pet rats in small quantities. Although the cooking process reduces toxins, it is recommended to keep onions to a minimum.

Rats are opportunistic omnivores and they can eat almost anything. If you have a pet rat, you can feed it veggies, fruits, and meat, but there are exceptions. Onions are such an exception. Especially raw onions.

If you don’t keep rats as pets but have these rodents in your house or yard, you can use onions to deter and repel them.

Rats hate the smell of onions and run away when they sense it.

In this article, you will learn if onions can kill rats and mice, if rats like onions, what kind of onions you can give to pet rats, and more.

Yes, raw onions kill rats. They contain large amounts of sulfur and become acidic in the rat’s stomach, causing gastrointestinal problems. Due to sulfur, onions can cause severe anemia, which can lead to the animal’s death. The toxins in onions decrease when cooked.

Onions (Allium cepa) are used in many dishes. They also have medicinal properties.

Onions have the following benefits for humans:

Few foods we eat are toxic or poisonous to rats, but onions are one of them. Onions contain toxic compounds, which can lead to anemia and death. They also cause gastrointestinal problems, as they are acidic for the rats’ stomachs.

You can break down these toxic substances by cooking the onions at high temperatures. Cooking onions makes them safe vegetables for rats.

If you keep rats and want to give them cooked food containing onions, they should be fine.

Keep in mind that cooking the onions does not completely eliminate the toxic compounds. If you plan on feeding your rat cooked onion, do so in moderation

Onions can kill mice too[1]. Raw onions cause anemia in mice, which leads to death.

If you keep mice as pets, it is not recommended to serve them raw onions. You have to cook the onions at high temperatures beforehand.

As with pet rats, feed your pet mice cooked onions in moderation, if at all.

How Do Onions Kill Rats and Mice?

Onions contain toxic compounds. These are what kill rats and mice. These rodents can’t vomit, making it impossible to eliminate toxins, resulting in slow poisoning.

Onions contain sulfur, a toxic component that can lead to anemia by damaging red blood cells. The resulting hemolytic anemia is accompanied by the formation of Heinz bodies in red blood cells (erythrocytes) of animals.[2]

Rats and mice are more resistant to onion toxicity than other domestic animals. But this doesn’t mean it can’t harm them.

In addition to anemia, onions in rats can also cause gastrointestinal disorders, including gas due to the acidity it produces in the stomach.

The rat’s anatomy does not allow it to vomit, making it impossible to expel toxins from its body.

Rats have reduced muscularity of the diaphragm and the stomach is not structured well for moving contents up their throat, creating a one-way system. They do not have the ability to reverse the flow of food. Once they have ingested a toxin, it will remain in their body until they digest it.

Because of this, rats have learned to avoid toxic foods. They also consume other non-nutrients (e.g. clay) to dilute the toxins in their stomach.[3]

This anatomical feature of rats makes onions effective in killing them. But like most toxins, it matters how much onion they consume to have side effects.

How Long Does It Take for Onions to Kill Rats?

Most rats die after ingesting raw onions within 12 hours. In rare cases, some rats can live a day or two until they die, depending on how much raw onion they ingested.

Mice and rats have similar anatomy. Neither animal can vomit. As mice are smaller than rats, they are affected by smaller amounts of onion.

Rats do not like onions unless they are cooked. The pungent and spicy smell of raw onions keeps rats away. Rats are attracted to onions when another food masks their smell. They seem to enjoy cooked onions though.

Onions have a strong pungent and spicy smell, which rats hate. For this reason, you can use slices of raw onions to repel rats and keep them away from your home.

Rats know that raw onions are bad for them and avoid them. They can accidentally eat raw onions when the onion’s strong smell is masked by another food.

If you want to kill rats with onions, mask the smell of raw onions with another food to trick rats into consuming them.

In addition to the spicy smell, raw onions also have a strong taste. Rats stop eating them after taking a few bites.

If you keep rats as pets and you want to give them onions, cook them first. Rats like cooked onions because they are sweet. Cooking also eliminates some of the toxins, making them less poisonous.

Related: What Do Rats Eat?

You can try these DIY recipes if you want to get rid of rats.[4]

For this recipe, you need beef stew and finely chopped raw onions:

Rats will come to eat the stew with the finely chopped raw onions.

For this method, you need pieces of fried meat and finely chopped raw onions.

Rats will come to eat the fried meat with the finely chopped raw onions.

Are Cooked Onions Okay for Rats?

Cooked onions are ok for rats but not in large quantities. Although cooking removes some of the toxic substances raw onions contain, it doesn’t eliminate them entirely. If you have pet rats, it is not recommended to serve them cooked onions in large amounts.

Cooking reduces the concentration of sulfur in the onion composition, making it less smelly and safe for rat consumption.

Sulfur is the compound that produces anemia and leads to rats’ death. It is also the reason why onions smell so strong and make us cry when we chop them.

Cooking onions encourages rats to eat them, but they do not have the same lethal effects on. There are cases in which rats are more sensitive and develop side effects from cooked onions.

If you have pet rats, consider these things before offering them cooked onions.

Onions cooked in oil have more calories and can lead to rat obesity if served in excess. It is recommended to only serve your pet rat with cooked onion as a snack.

Avoid cooked onions if your pet rat has liver problems or is overweight.

Caramelized onions are prepared at high temperatures. They are safe to be eaten by rats (in theory) because cooking reduces the sulfur concentration. Onions cooked this way are sweet, and rats love sweets.

Caramelized onions have no nutritional value. They are only rich in calories. They are not recommended in obese rats or those with liver problems.

Avoid offering your pet rat onions, cooked or raw, to make sure you won’t make your pet sick.

Although green onions contain fewer toxins than classic onions, they are not recommended for rats. They can make rats sick, but won’t kill them.

No, rats do not like raw onions. They are repelled by the pungent and spicy smell of raw onions. The chemical component responsible for the strong smell of onions is sulfur. This component is also considered toxic to rats because it can cause anemia and death in rats.

How Fast Do Onions Kill Rats?

Raw onions can kill rats in 12 hours. There are also cases in which death occurs in 1-2 days. The more raw onions a rat consumes, the more devastating the side effects and the shorter the time of dying.