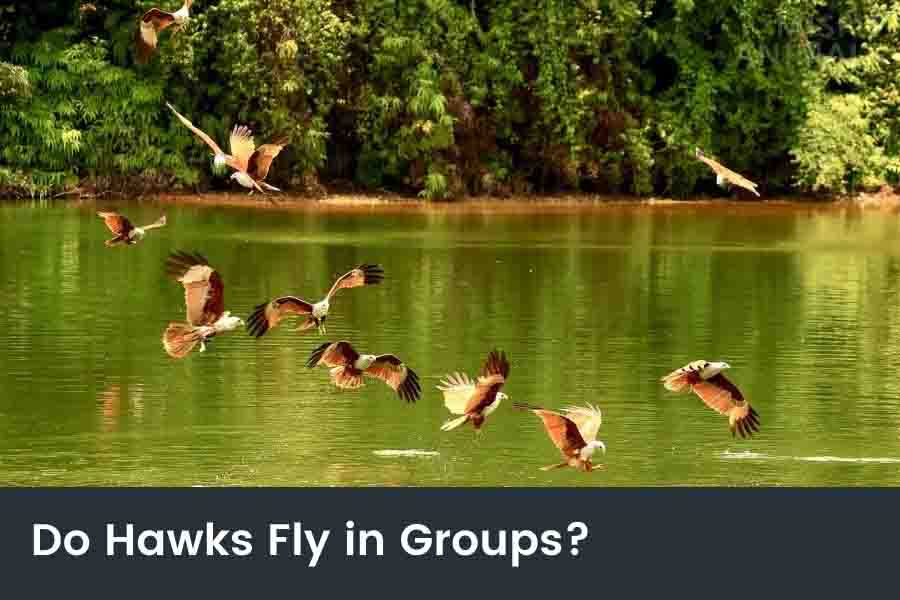 Hawks do occasionally flock. They typically flock and fly in groups when they’re migrating, as this is a more effective way of flying long distances. They’ll flock around thermals, which are columns of rising air.

Around the world, bird enthusiasts and watchers keep a close eye on the skies in hopes of spotting Hawks.

This is known as hawk spotting.

While hawks typically keep to themselves, they sometimes gather. But why?

In this article, we’ll take a look at why hawks flock, if all hawks do so, and what the purpose of their flocking is.

What Does It Mean to Flock?

The term “flock” is used to describe a group of birds (hawks, doves, ducks, and many other birds) that are either nesting, flying, or traveling together. The number in a flock can be in the thousands for some species.

Doves have been known to flock in large numbers during migration. Hawks are known to do the same, migrating in groups.

Hawks are usually thought of as solitary birds, as they prefer to be by themselves. However, it is also true that some species of hawks pair of, flock, and fly in groups.

These flocks are usually small but do exist.

Hawks will flock under certain circumstances:

Communal hunting is when a group of hawks works together to hunt for prey.  By doing this, their prey is less likely to escape.[1]

Cooperative breeding is when two hawks come together and help each other out with taking care of their young. While hawks live alone most of the year, they will live together when breeding and raising younglings.[2]

Do Hawks Fly in Groups?

Do hawks fly in groups? Most do, but not all. There are some species of hawk that do fly together in pairs or in groups, but most are solitary fliers. Hawks will flock around thermals and when migrating.

Hawks tend to congregate at the same locations, so while they may not fly in groups per se, they do come together to do the same activity.

These animals typically fly in groups when migrating, or when they’re gathering around thermals.

Thermals are rising columns of air, which hawks use t conserve energy while soaring in the sky.

What Is a Group of Hawks Called?

A group of hawks is called a kettle. The term in modern use usually refers to a group in flight, although the word is found in some classic hunting terminology with the meaning ‘a pack or flight of hawks’.

Related: What Is a Group of Hawks Called?

When Do Hawks Fly in Groups?

Hawks will fly in large groups when migrating, or when gathering around thermals. Hawks are seasonal migrators, meaning they fly southward for the winter and north when the Spring comes around.

When you think of hawks, do you picture them flying alone? Or are they perhaps with their young? Hawks aren’t reserved to one or the other. However, they are at their strongest when in groups.

Hawks fly in flocks for several reasons, but they most often gather to migrate or when utilizing thermals.

The phenomenon of hawks gathering together in flocks is fairly well documented. These “flocks” often occur as a result of the hawk’s search for thermals (columns of warm rising air).

They use the thermals to rise into the sky and stay there, without spending much energy. Hence, it’s an efficient way to fly around.

The term “a kettle of hawks” refers to this phenomenon, where hawks will fly in circles with the use of thermals.

When hawks fly around thermals, they fly in circles or helixes[3]. This is an easy way for them to stay aloft and it conserves their energy for when they might need it later.

Related: Do Hawks Fly In Circles?

Hawks Group up When Migrating

The most common time of year where hawks fly in flocks is during migration. Hawks migrate in groups for three main reasons: protection, navigation, and conservation of energy.

Hawks migrate. They fly south before winter and return to their nesting grounds in the spring.

They do this because it’s safer, easier to navigate, and it’s more efficient.

For one, they group together when migrating to protect themselves. Hawks (and other birds) will bunch together in order to form a mass that makes it easier to ward off attacks from predators like eagles, falcons, and owls.

Secondly, birds group together when flying because it helps them navigate.

Lastly, it’s more energy efficient to fly in a flock. The air will flow through the flock, and the hawks in the back will be able to use this airflow to soar more easily.

What Kind of Hawks Fly in Groups?

Different types of hawks will flock together depending on the time of year and their purpose.

Migratory hawks gather in large groups before they begin their southward migration for winter. This makes it easier to find a group rather than flying alone. They often fly high into the air.

Other birds will gather on thermals, as discussed earlier.

Let’s take a look at specific species of hawks and their flocking behavior.

Broad-winged hawks are a type of hawk that is known for flying in groups, or “kettles.”

Generally, there are two reasons why these hawks fly as flocks. The first reason is that they’re migratory birds and the second reason is that it helps them to hunt.

The Broad-winged hawk can be found from eastern North America to South America. They select roosting, nesting, and foraging sites near large bodies of water such as rivers and swamps.

During the course of a day, these hawks may fly up to forty miles in search of food.

Sharp-shinned hawks are a smaller species of hawk, typically measuring between 8 and 16 inches tall. Their wingspan is also relatively short, at around 21 inches long.

Due to their small size, they use flocking while migrating as a means of protection against predators.

Hawks do flock and fly in groups. They have distinct purposes for flocking, such as migrating, hunting, or breeding.

On rare occasions, these types of birds will form large congregations around thermals as well. When doing so, they’re referred to as a kettle of hawks due to their circling flight pattern.