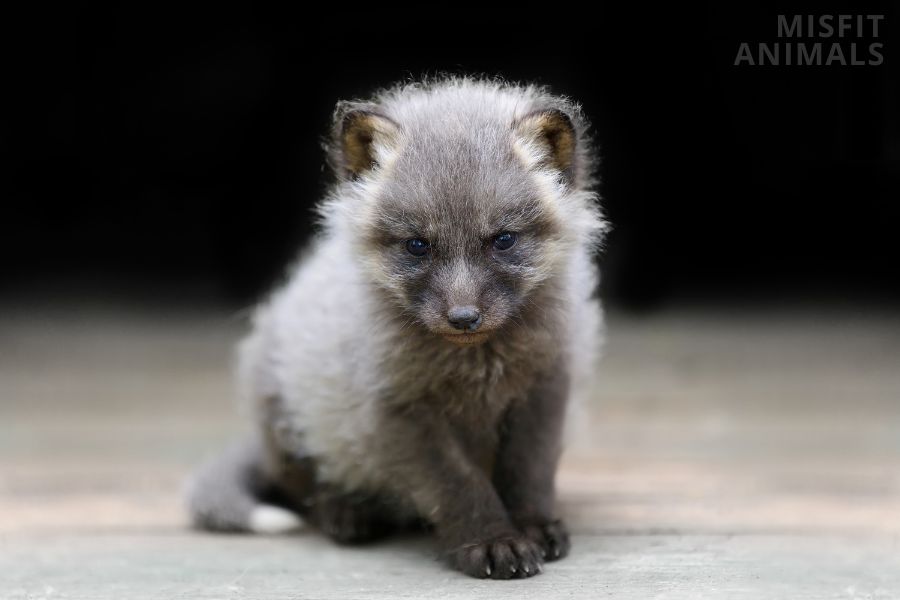 Cross foxes are red foxes with a different color. They have black or silver fur on their shoulders and back that crosses. Cross foxes do not have the characteristic white pattern on the chin, chest, and belly, as red foxes normally have.

Red foxes can have dozens of colors, not only red or orange with white.

They can be silver, black, reddish-brown, white, marbled, red with black or silver (cross fox), and many other color varieties.

In the old days, cross foxes were thought to be a different species and even had their own name, Canis decassatus.

But with genetic testing, it was established that cross foxes are only red foxes of a different color variation.

In this article, you will find out what cross foxes are, what they look like, where they are found, what their behavior is, what their diet is, and many other interesting facts.

The cross fox is a color variant of the red fox (Vulpes vulpes). They have two dark-colored stripes on the back and shoulders, which intersect and form a cross. These foxes are not as rare as is thought. In Canada, they make up about 30% of the red fox population.

Red foxes have over 20 colors. They can be:

Cross foxes are not a separate fox species. They are red foxes of a different color. They have a partial melanin mutation that gives them their characteristic color.

Cross foxes are less common than red foxes but more common than silver foxes. They are found in North America, especially in Canada where they make up 30% of the red fox population.[1]

These foxes do not have a red or orange coat like the classic red foxes. Instead, they have two dark stripes on their backs:

These stripes form a cross, hence the name cross fox.

Cross foxes do not have the same amount of white fur as red foxes; they are darker. But the tip of the tail of some specimens is white.

Cross foxes dig dens near water sources. They use the dens for three purposes:

Like all red foxes, cross foxes also steal or borrow dens from other animals.

They are omnivore animals and consume a diet based on the following animals:

The lifespan of cross foxes is similar to that of red foxes. They live 3-6 years in the wild and can live up to 14 years in captivity.

Melanin is a natural substance (a pigment) present in humans and animals in different proportions and concentrations that gives color to the skin, hair, and eyes.[2] This pigment is created by cells called melanocytes.

Foxes that have more melanin are called melanistic foxes.

Silver foxes are also part of this category of melanistic foxes, only they have more dark pigment than cross foxes.

Albinism is the opposite of melanism. Albino animals do not have a bit of pigment. They have white hair, pink skin, and light, pink or red eyes.

Anatomy and Appearance of Cross Foxes

The anatomy of cross foxes is similar to that of red foxes. They have a triangular head, with a pointed muzzle, and large, triangular ears pointing upwards. Cross foxes are 14-20 inches tall, 22-35 inches long without the tail, and weigh up to 30 pounds.

Apart from the color, cross foxes are not different from red foxes.

Here are the similarities between cross foxes and red foxes:

These are the differences between cross foxes and red foxes:

Distribution and Habitat of Cross Foxes

Cross foxes are mostly found in North America, especially Canada. They dig dens to raise their young, store food, or escape predators and bad weather. They are also no strangers to harsh weather conditions such as cold, ice, and snow.

Cross foxes were once found in Utah, but the fur trade decimated their population.

Apart from America, cross foxes are also found in Europe, especially in Finland and Scandinavia. They are rare in Europe.[3]

Cross foxes rarely live in cities or suburbs, but can sometimes be seen crossing roads or coming to nearby human settlements.

As red foxes, cross foxes dig, inherit, or steal dens from other animals. The dens of cross foxes serve as pantries, nurseries, and shelters.

Cross foxes have the same natural predators as red foxes:

Cross foxes are nocturnal. shy, and social animals. They prefer to run instead of fighting when they encounter threats. Cross foxes emit a musk-like characteristic odor as a defensive mechanism when they feel threatened.

Cross foxes are crepuscular-nocturnal animals, meaning they go hunting at dawn and night. They hunt all kinds of animals as long as they are smaller than the fox itself.

Like red foxes, they are ambush predators. They have excellent hearing, and when they sense prey, they will ambush it. When the prey is in their visual range, they pounce on it with their front paws, as cats do.

To kill their prey, foxes bite at the base of the neck to break the spine.[4]

The great hearing of cross foxes that live in cold, snowy areas also helps them hear prey moving under the snow.

Being omnivorous animals, cross foxes feed on a variety of foods:

If you have a pet cross fox, you can feed it canned pet food and add fruits and vegetables to its diet. You can also try a raw diet but don’t forget to add a mix of vitamins and minerals besides meat, fruits, and vegetables.

The standard cross fox is the most common color mutation in cross foxes. They have red/orange, black/silver, and white coats. There are also other color variations such as gold cross and silver cross.

Besides the standard cross fox with red/orange with black/silver and white fur, there are two other color varieties:

The silver cross is the rarest cross color variety of these three. Silver cross foxes have completely black bodies with orange around the cheeks and ears.

There are other cross-color varieties that appear after mating a cross fox (standard, gold, or silver cross) with another color variety:

What Is a Black and Red Fox Called?

The black and red fox is a melanistic red fox or a cross fox. These foxes have black fur on the back and shoulders, and red/orange and white fur. This color is the standard color for cross foxes.

Black foxes are rare. They are found in North America and represent less than 0.1% of the fox population in this area. Black foxes are red foxes that have a color mutation that makes their fur black-silver.