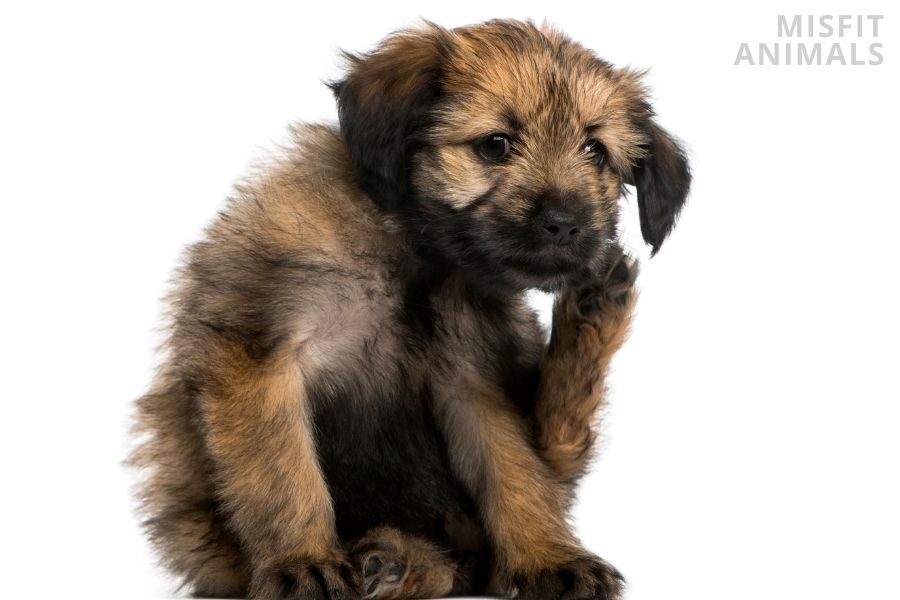 There are more than 2,500 species of fleas, but only a few parasitize dogs. Select types of fleas are dangerous to dogs as they can transmit diseases or intestinal parasites, such as tapeworms.

Fleas are the most widespread external parasite found on dogs.

There are over 2,500 species of fleas, of which 300 are found in America. Only a few of these species commonly infest dogs. Cat fleas are the most common domestic fleas found on dogs.

In this article, you will learn about various flea types, what they look like if they are dangerous, and how you can prevent them.

Fleas are small brown insects. It is very difficult to tell the difference between the types of fleas because they are very small. Males are smaller and darker than females. Flea eggs are almost white and non-sticky and can be found in dogs’ fur in case of massive infestations. Flea larvae are like small white worms, which darken in color as they feed.

Fleas are insects. They are typically between 1-2 mm long[1], depending on the species. Females have a yellowish abdomen, unlike males which are darker in color (and smaller).[2]

The female flea lays eggs in piles of 25-40 eggs (per day). They are off-white and non-sticky. You can find these eggs on your dog in massive infestations, but they are typically not present in light infestations.

Flea larvae are about 5 mm long, white, and feed on flea drops. They darken in color and turn brown as they feed. They can also be found in your dog’s fur in massive infestations, as in the case of eggs.

6 Different Types of Fleas on Dogs

There are over 2,000 species of fleas, but only a few can parasitize your dog. Only six of them are known to feed on dogs, and Ctenocephalides felis is the most common.

Dogs can be infested by six flea species:

The tiny hairs on the flea’s legs help them cling to the dog’s fur when it scratches or grooms.

Ctenocephalides felis (cat flea) is the best known and most common flea found on dogs. This flea’s main host is represented by cats. Cat fleas are native to Africa but are found throughout the world. Over 90% of fleas found on dogs are cat fleas.[8]

Ctenocephalides canis (dog flea) mainly parasitizes dogs and cats, but can also bite humans. Dog fleas are very similar to cat fleas. This species of fleas can transmit tapeworms to pets and humans if swallowed. Dog fleas can lay up to 4,000 eggs on the host’s fur.[9]

Pulex simulans generally parasitize large mammals, but can also be found on dogs and humans.

Echidnophaga gallinacea (hen flea or sticktight flea) embed their head in the host’s skin to feed. They can also be found on dogs that live near hen houses.

Tunga penetrans (sand flea) are found in tropical environments and are particularly parasitic on humans, but can be found on dogs. The particularity of this species is that the female burrows into the skin to lay eggs.

Xenopsylla cheopis (rat flea) are found especially on rats, but they can parasitize dogs too. This species can transmit Yersinia pestis, the bacteria responsible for the plague.

What Types of Fleas Are Dangerous for Dogs?

All types of fleas are dangerous to dogs. Some species can cause anemia, while others transmit various bacteria and intestinal parasites to both dogs and humans.

Fleas can cause several dangerous issues:

Fleas can also irritate your dog’s skin, causing it to itch and scratch intensely.

All types of fleas that can be found on a dog are dangerous because they transmit bacteria or intestinal parasites, or can cause anemia.

These species of fleas can transmit tapeworms, cat scratch disease, and typhus to dogs. They can also cause anemia in puppies or sick and weak pets due to a lack of energy to clean and groom themselves.

This type of flea can transmit the plague bacterium Yersinia pestis and cause anemia in pets.

Echidnophaga gallinacea is not considered dangerous to dogs (it does not transmit pathogens) but it can cause anemia and pain at the site of embedment.

This type of flea causes tungiasis, a condition in which the female flea burrows itself into the skin of the dog to lay eggs. It causes local pain and can become infected if the flea is not removed.

How Can I Prevent a Flea Infestation?

Using antiparasitic substances regularly is the recommended method to prevent fleas on dogs. These products are available as chewable tablets, spot-on pipettes, or collars. Talk to your veterinarian about the best-suited product for your dog’s age and weight.

Fleas transmit many diseases and cause a lot of discomfort to dogs. This is why it is important to prevent fleas before they infest your dog.

The most common methods of killing and preventing fleas are spot-on pipettes and antiparasitic collars. In the warmer months, when the flea population is growing considerably, some veterinarians recommend using these two products together for greater effectiveness.

Dogs sensitive to topical antiparasitic substances are recommended chewable tablets. These products are as effective as topical products with only a few rare side effects.

What Kills Fleas on Dogs Instantly?

Antiparasitic sprays can kill fleas almost instantly. Some products also have a preventive effect, being effective for 4-5 weeks after application.

What Kind of Fleas Are on Dogs?

The most common fleas found on dogs are cat fleas (Ctenocephalides felis). They represent over 90% of all fleas on a dog. Other species of fleas that can be found on a dog are rat flea, hen flea, dog flea, and sand flea.

How Do I Identify a Flea?

Fleas are easy to identify, especially on light-haired dogs. They look like black dots that move very fast and jump.