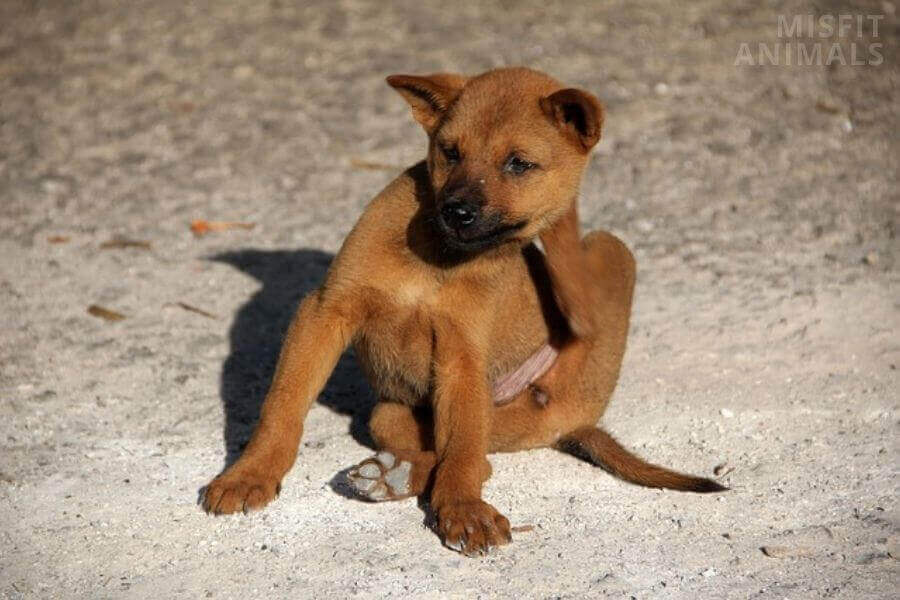 Flea bites on a dog’s skin look like small red bumps, sometimes with a red circle around them. They are similar to bites on humans. Although it is often hard to see the flea bites through the thick fur of dogs, an obvious sign of a flea infestation is itching and excessive scratching.

“How to get rid of flea bites on my dog?” is a common question among pet owners, especially in the hot season.

Fleas are a common problem for pets. They are often found in dogs’ fur and, in some cases, even pose a danger to their health.

More than uninvited guests who make your dog scratch excessively, fleas are also hematophagous, meaning they feed on the host’s blood. They also reproduce fast in your pet’s fur. Pet owners can often find eggs in their dog’s fur.

Fleas are extremely resistant and cannot be killed by crushing. Prevention is the best way to get rid of fleas and avoid flea bites on dogs.

In this article, you will learn about fleas, what a flea bite looks like on dogs, flea bite complications, how to treat them, and more.

Fleas are external parasites that feed on blood from various hosts, including humans and pets. They can negatively impact the life of your dog and cause many diseases, including flea allergy dermatitis and tapeworms.

Fleas are insects that parasitize the skin of their host. They are part of the Siphonaptera order, which comprises several families. This includes the most important for veterinary and human medicine – the family Pulicidae (a flea family).

There are over 2,500 flea species worldwide that feed on the blood of mammals and birds[1].

A female flea can produce up to 2,000 eggs during her lifetime, laying about 40-50 eggs per day. The eggs are oval, white, non-sticky, and fall to the ground as soon as they are laid.[4]

Flea larvae hatch in one to 12 days and have the following traits:

The larvae are usually found in places such as:

This stage lasts 4-18 days, after which the larvae weave their cocoons and turn into pupae.

The pupal stage follows the larvae stage. This can last from three days to a year, depending on temperature and humidity.

From the pupa comes a young flea, which feeds on blood. Female fleas lay eggs 48 hours after their first meal.

Young adults can survive even for months without eating if they have the right environmental conditions.

What Does a Flea Bite on a Dog Look Like?

A flea bite on a dog looks like a small, pink or discolored swelling or bump. A faded halo often occurs around it. Bites can appear in a straight line or in groups. The most obvious sign of fleas is intense scratching.

Fleas usually leave small, red dots after biting. Some bites can be discolored. The marks of flea bites are smaller compared to other insect bites but can become inflamed following intense scratching.

Some dogs are more sensitive to flea saliva, which leads to much larger red areas on their skin.

The areas where fleas are commonly found are:

The areas where flea bites frequently occur are the groin area and the armpits because they are warm and protected.

The most common signs of fleas on dogs are:

Flea infestation is a common cause of itching in dogs. Fleas are transmitted from other animals or through the fleas’ development stages. Itching caused by flea infestation occurs mainly on the back, tail, abdomen, inner thighs, and neck.

Dermatological symptoms are especially noticeable in dogs allergic to the components of flea saliva.

Fleas can cause complications by transmitting certain bacteria through their bites. These include Bartonella, Rickettsia, or Yersinia pestis (the bacterium responsible for the plague). Dogs sensitive to flea saliva may also develop an allergic reaction called flea allergy dermatitis (FAD). Fleas can also cause anemia in puppies and transmit tapeworms.

In addition to irritation and severe discomfort, flea bites can also cause anemia. Anemia especially occurs in young, sick, or otherwise weakened animals.

Fleas are also vectors for dangerous diseases. They can transmit certain bacteria to dogs and cats through their bites:

Fleas can also be carriers for tapeworm eggs (Dipylidium caninum). Dogs have to swallow an infected flea to parasitize themselves with tapeworms.[5]

The tapeworm attaches itself to the dog’s intestine and develops very quickly, releasing proglottids (small segments of the tapeworm full of eggs). They look like small grains of rice or cucumber seeds that move and can be observed around the dog’s anus or in its feces. Once the proglottids get into the environment, the cycle is repeated.

Infected dogs can transmit tapeworms to people (especially kids) and other pets.

What Is Flea Allergy Dermatitis (FAD)?

Flea allergy dermatitis is an immunologic disease in which the immune system of a sensitive dog responds to an allergen – the flea saliva.

Of all dermatitis that can occur in dogs (bacterial, fungal, allergic), the most common is allergic dermatitis caused by flea bites.

This disease occurs as a result of the body’s exposure to flea saliva for long periods and in massive infestations. Pets living in an environment with a high concentration of fleas are prone to this disease.

The incidence of flea allergy dermatitis mostly occurs in the summer or during long periods with high temperatures. This is because fleas act depending on environmental conditions.

FAD symptoms can occur at any age but are more common in dogs up to five years of age.

The most common symptoms of flea allergic dermatitis in dogs are

It is recommended to visit a vet at the first signs of discomfort in your pet, to treat and prevent flea allergy dermatitis in dogs.

How Do You Treat Flea Bites on Dogs?

Flea bites can be treated locally by disinfecting the affected area. They can become infected if the dog licks or scratches excessively. If your dog is intensely bitten by fleas, consult your veterinarian.

The best way to treat flea bites on your dog is to get rid of the fleas and prevent them in the future.

If you find a flea bite on your dog, do the following:

If the lesions do not resolve in a few days, if they get infected, or if your dog is still itching, go to the vet for an examination. They may prescribe medication for your dog that will soothe its itching and allergic reaction.

There are many anti-flea products on the market from which you can choose what is best for your dog:

To ensure extra protection for your dog in the summer, it is recommended to use several antiparasitic products at the same time, such as spot-on pipettes and collars.

The use of antiparasitic substances is highly suggested but not always sufficient. In many cases, a disinsection of the environment in which your dog lives is also needed.

A dog that has fleas most likely has small, red dots on its skin, dirty fur due to flea droppings, and intense itching.

Flea bites are usually harmless, but there are cases when they can become infected or cause allergic reactions in pets. Fleas can also transmit various bacteria and parasites to your pet.

Flea bites are treated locally, and in more severe cases, you should take your dog to the vet. Apply antiparasitic substances regularly to prevent flea bites on your dog.