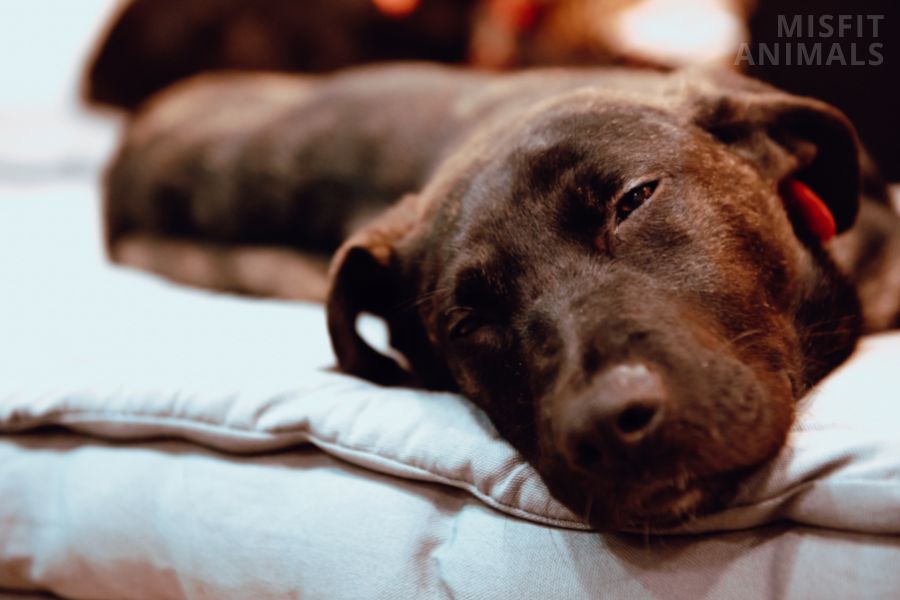 Fast breathing while sleeping is due to dreaming, breathing problems, or other underlying health conditions. These conditions include laryngeal paralysis, collapsing trachea, lung cancer, pneumonia, anemia, and more. Other possible causes include pain, onion or garlic poisoning, and heatstroke.

Dogs twitch, shake, whine, and drool when they sleep. But how about fast breathing?

It’s more common than you think, and not always something to worry about. It can indicate dreaming or severe medical conditions.

In this article, we are going to discuss in detail the most common causes of dog heavy breathing during sleep.

We are also going to teach you how to recognize fast breathing, what to do if confronted with this problem, and how to prevent your dog from breathing heavily during sleep.

Should I Worry If My Dog Is Breathing Fast While Sleeping?

Dog owners should not worry if their dog breaths heavily during sleep. This symptom might be harmless but can sometimes indicate a more serious health condition.

Understanding how to recognize the signs of possible severe diseases is essential. These diseases are usually accompanied by other symptoms, such as vomiting, diarrhea, coughing, and lethargy when your dog is awake.

What Is A Healthy Respiratory Rate for Dogs?

The average breath rate of a sleeping healthy adult dog is around 15 breaths per minute[1]. But if your dog has a breathing rate above 15 it is not necessarily sick. As long as the breathing rate keeps below 30, there is nothing to worry about.

Detecting abnormal respiratory rates in dogs is difficult for most people while their pet is active. But when dogs are asleep, sudden rapid breathing patterns are more obvious.

To determine your dog’s respiratory rate, set a timer of 60 seconds and count how many times it breathes during this period. Another way to do it is to set your timer to 15 seconds, count the number of breaths, and multiply this number by 4.

Is It Normal for Dogs to Breathe Fast While Sleeping?

In most cases, it is normal for dogs to have episodes of rapid respiratory rate while sleeping. There are some exceptions you need to take seriously to be able to provide good care for your dog.

Heavy and fast breathing is normal when dogs are in the Rapid Eye Movement sleeping stage. Like humans, dogs have vivid dreams. These vivid dreams often result in accelerated breathing.

All other cases of accelerated breathing while sleeping can indicate an underlying health condition that needs to be diagnosed by a vet.

Symptoms of Rapid Breathing in Dogs

Dogs breathing fast can easily be identified, as you can compare it to how your dog breathes after a long session of running. Some of the symptoms that indicate a fast respiratory rate can not be observed if this happens while the dogs are asleep.

Learning to recognize fast breathing in dogs will help you determine if a dog is breathing too fast when they sleep.

7 Reasons Why a Dog Breathes Fast While Sleeping

Fast and heavy breathing in dogs is most often caused by dreams or breathing problems. Other rarer causes include serious health issues, heatstroke, inhalation of smoke, pain, or poisoning.

A dog breathing heavily while sleeping is not always a reason to panic. Understanding the possible causes hiding behind the issue is essential before making the decision to rush your dog to the emergency room.

The possible reasons why dogs breathe heavily when sleeping are as follows:

If you notice your dog is breathing fast through the nose while sleeping, this can indicate a chronic condition or an acute one. Common breathing problems spotted in dogs are asthma, pressure on the trachea, and breed characteristics that lead to improper breathing patterns.

As many breeds have been genetically modified over time, some of them have developed breathing problems or are prone to more nasal infections than others.

Not all dogs that exhibit rapid breathing while sleeping are sick. Rapid breathing during sleep occurs when a dog is dreaming. To distinguish a dream from a possible health issue, it is essential to observe other signs, such as twitching, legs moving at a fast pace that mimics running, or quiet barks.

Hard breathing during sleep can indicate several life-threatening health problems. Not all health conditions have the same severity but not taking action when fast breathing is noticed might cause them to aggravate.

Here are the health issues that can induce your dog’s rapid breathing:

This condition happens when the muscles responsible for the opening of a dog’s airways do not function as they should[2]. In the early stages, the dog’s airways are only partially obstructed. In the advanced stages, the disease can completely collapse a dog’s breathing tube.

This is a viral disease your dog can get from dog playgrounds or anywhere it interacts with a large number of dogs. It is highly contagious but not dangerous. Puppies are more susceptible to developing severe illnesses[3] due to this condition.

This condition can affect any breed but some are more susceptible than others. Chihuahua, Yorkshire Terrier, Toy Poodle, Pomeranian, and Lhasa Apsos are some of the breeds that are more predisposed to develop collapsing tracheas.[4]

The severity of lung cancers differs from early stages to advanced ones. If your dog breathes hard while sleeping it can indicate its lungs are severely affected.

Pneumonia is easily treated with antibiotics, so this is one of the conditions that will not put your dog at risk if it is diagnosed early.

Fungal or Bacterial Infection of the Nasal Chambers

This health issue is also called ‘rhinitis’. Rhinitis can cause a dog to breathe faster during their sleep but you can notice this during their active periods as well.

Anemia is a condition that affects the red blood cells in the bloodstream. Dogs with anemia tend to have less oxygen in their bloodstream, so breathing more rapidly compensates for this lack.

Other conditions, such as nausea, allergies, and hernia, can also cause rapid breathing.

Because dogs don’t sweat in order to cool down, they use other mechanisms that allow them to lower their body temperature, such as rapid breathing. The only sweat glands dogs have are located in their paws. These glands release toxins but there are too few to liberate enough sweat to cool them down.

If your dog spends a large amount of time in the heat, its system might not be able to cool down fast enough. This is why rapid breathing during sleep on summer days might not come as a surprise for many dog owners.

A dog’s shallow breathing while sleeping can be an indicator that it inhaled smoke. This happens if your dog is sleeping near a fire pit or a barbecue place. The cases in which this happens due to arson are rare, especially with pet dogs that are almost always under the supervision of their owners.

When a dog is breathing heavily during sleep, most owners don’t consider that their furry friend is in pain. This usually happens because we think that pain in dogs only manifests after injury. In some cases, arthritis, gastrointestinal issues, dental disease, and ear pain, among other conditions, can cause pain while sleeping.

Garlic and onions are some of the foods that can be poisonous to dogs, especially if consumed in large amounts. If a dog has onion or garlic poisoning, rapid breathing will be accompanied by vomiting, diarrhea, or drooling.

What To Do if My Dog Is Breathing Fast While Sleeping

If you come to the conclusion that your dog is dreaming, and if it has done this before, you should not wake it. Many dogs get scared and, if they are having a nightmare, they could attack you.

If you notice signs of a more severe issue, you should take your dog to the emergency room to make sure that they get the care they need. In case this happens during the day, call your vet and describe your dog’s symptoms. The vet will tell you if you need to book an appointment or if your dog is not in danger.

Preventing a dog from breathing rapidly during sleep is done by regularly checking for symptoms that indicate a disease mentioned previously.

Feeding your dog healthy food is also important to prevent issues such as food poisoning, or gastritis. Keeping potentially poisonous foods away is an essential aspect.

Improving sleep conditions helps prevent your dog from breathing heavily and fast while sleeping. You can do this by providing a clean bed, keeping the space cool, a bed with an orthopedic mattress, and installing an air purifier if your dog has allergies.

Taking care of dogs is not always an easy task and recognizing when your dog is in danger is essential to be able to provide the care they need to be healthy and happy. The fact that the dog is breathing rapidly during sleep is, most of the time, a sign that it is dreaming.

Recognizing when this breathing pattern indicates a more serious condition is essential. Check out our posts to find out more about other behaviors that might indicate that your dog is not well.