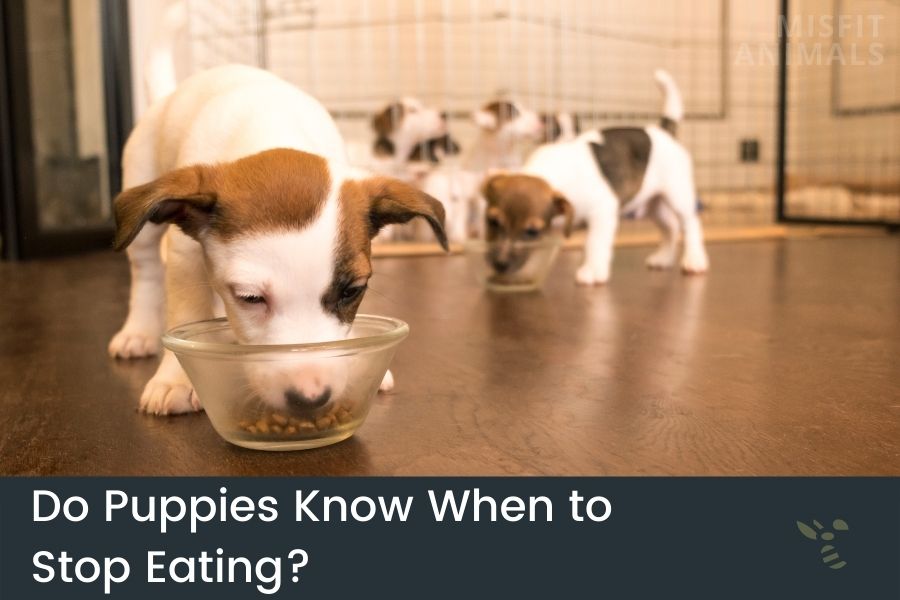 Some puppies don’t know when to stop eating. Just like humans, they need to learn when they are full. If they don’t learn that, they may suffer from obesity-related issues.

Taking care of a puppy can get stressful and demanding. You need to train your puppy for everything to keep it away from any problems.

Similarly, most puppies don’t know when to stop eating. But, why is that, and how can you stop them from overeating?

In this article, we’ll elaborate more on the eating habits of puppies and the risks of overeating.

Do Puppies Know When to Stop Eating?

Most puppies don’t know when to stop eating. They may keep chewing and eating both edible and inedible food items until you stop them.

Puppies are naturally curious animals. They roam about nibbling and chewing on things to check whether something is edible or not.

However, your puppy may not stop eating several times as it won’t realize that it is already full. This overeating issue may lead to obesity and other related problems.

Why Do Dogs Not Know When to Stop Eating?

Certain dogs don’t realize that they’re full and need to learn it. So, they may keep eating until they feel nauseous. However, overeating may also have underlying problems, such as stress.

If your dog keeps on overeating, there are three possible causes responsible for this.

Some dogs know when they’re full and will stop eating at the point of realization. But, a few dogs aren’t familiar with this realization. Thus, they may go on.

In this situation, you need to train your dog to stop eating or only give food in the required or suggested amounts.

Stress-eating is common in both humans and dogs. As per the American Kennel Organization, the common causes of stress include fear (noises, strange people, new environment), separation anxiety, and aging.

Apart from stress-eating, your dog may also show other signs of stress such as aggression, excessive panting and drooling, and restlessness.

If you feed your dog enormous amounts of food, they might get used to that. Now, if you reduce their meal to a more reasonable size, they may not feel satisfied and start overeating.

Some dogs may exhibit survival instincts. Hence, they may keep eating if they think they won’t get food again.

Will a Dog Really Eat Itself to Death if Given the Chance?

There is a rare possibility that dogs will eat themselves to death if given the chance. Usually, they will stop when they throw up or feel nauseous.

If you are free-feeding your dog, you might wonder if it will eat itself to death. However, given a chance, most dogs will overeat until they throw up or at least feel like throwing up. They won’t eat themselves to death.

Remember that overeating may lead to a bloating problem if your dog overeats too quickly. Bloating may cause serious health issues if it isn’t treated immediately.

When Should I Stop My Puppy From Eating?

You should stop your puppy from eating if they have reached their recommended daily calorie intake. If they also show signs of nausea, take the food away from them.

If you don’t have set feeding times and meal quantities for your puppy, it may keep eating as much food as you give it. However, you need to stop them at some point to avoid overfeeding.

Ensure that your puppy has their daily fill of balanced nutrients and calories.

You may also check for any signs of overeating, such as a bulging tummy or nausea.

How to Know You Are Feeding Your Puppy Too Much?

You may be overfeeding your puppy if its weight and size are heavier than puppies usually are (relative to their breed). You should also look out for soft stools, which is a clear indicator of overfeeding.

Puppies may act like they are always hungry and keep running around you asking for food. If you comply with their requests, you may end up overfeeding them.

Here are some signs of overeating in puppies.

There is no issue if your puppy weighs slightly more than other puppies. But, if there is a drastic difference, reevaluate your puppy’s diet and meal times as you might be overfeeding them.

The table below gives an approximate weight for puppies of a specific age and breed type:

Soft stools are another clear indication that you’re overfeeding your dog. You need to check your puppy’s stools in the morning, afternoon, and evening.

Finally, you need to check your puppy’s body shape. Ideally, you should be able to see a faint outline of ribs with an hourglass shape.

If your puppy has fat deposits near its ribs and no segregation between its chest and stomach, it’s a clear sign of repetitive eating.

Puppies may seem starved because they are, as they are constantly active and need plenty of calories to keep up. However, some puppies can develop bad habits, causing them to act starved.

Puppies are rather expressive with their needs and demands. But what if they continually act like they are starving or not getting enough food?

Well, there are a few probable reasons for this behavior, such as.

If puppies act starved, the chances are that they might actually be hungry all day long.

As puppies constantly grow, their calorie intake is more than an adult dog[1]. Therefore, if you don’t provide them with a balanced diet, as per their breed and sex, they may feel starved.

Puppies, just like dogs, may act starved out of survival instinct.

As dogs are predominantly wild, they may project feast-or-famine thinking. So, if they get food, they will obsessively feed on it as they feel like they won’t get to eat again.

Similarly, when puppies (or dogs) don’t get food, they may act starved purely out of survival instincts.

If you give in to your puppy’s demands and provide it with food whenever it begs, it will make this a habit. Hence, you might see your puppy acting starved and begging to procure food from you.

What Happens if a Puppy Eats Too Much?

Overeating in puppies is a severe cause of concern. It can lead to fatal health issues, such as.

Obesity in puppies can lead to an increased risk of diseases such as arthritis, diabetes, cardiac problems, and orthopedic problems.

Moreover, these problems can reduce your dog’s lifespan and overall quality of life.

Bloating is one of the severe issues that can be caused by overeating.

If your puppy keeps on eating, its stomach may expand. This expansion is risky as the stomach can put stress on other organs, thus, leading to difficulty in breathing or restricted blood flow.

As this condition is life-threatening, you need to consult a veterinarian if you see the following symptoms:[3]

Skeletal issues arise in puppies when their body grows too quickly. For instance, a puppy might suffer from Osteochondrosis – a disease caused due to rapid bone development.

They may also suffer from hip dysplasia, where the hip ball joint isn’t connected correctly.

Puppies may face hip dysplasia if their weight keeps on increasing and puts pressure on their hips.

Heart problems in puppies and dogs are significant side effects of obesity. The fat may deposit in their arteries, causing them to get clogged.

Additionally, obesity may cause your puppy to develop high blood pressure and diabetes, leading to cardiac problems.

If a puppy overeats, it gains extra weight that the body may not support. Thus, it can lead to increased pressure on joints, which may cause joint pain and arthritis in the long run.

Puppies may not know when to stop eating as they are not trained to do so. They may also keep on eating purely out of survival instinct. The habit of overeating can result in obesity, which can cause a series of health problems.