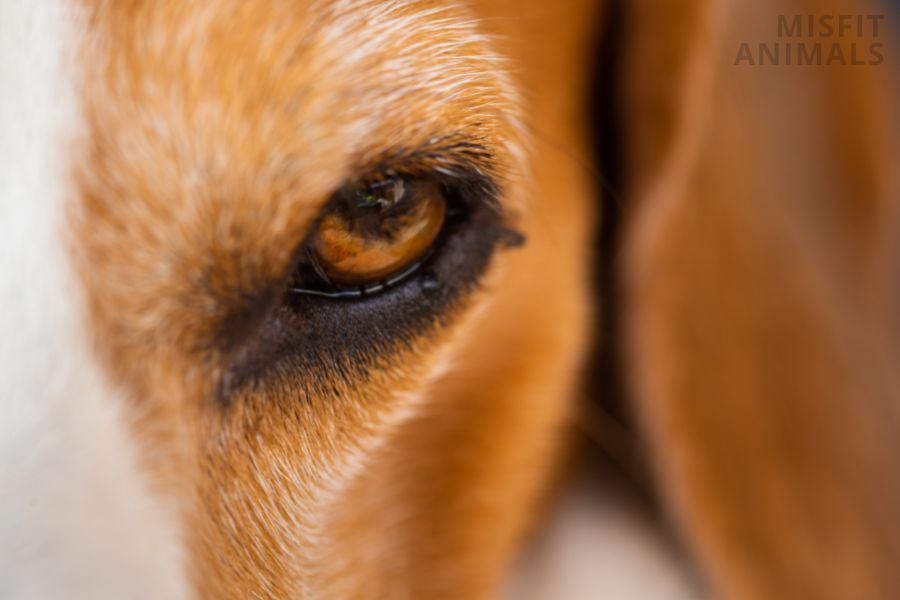 Most dog owners treat their furry companion as a family member. This includes keeping them healthy.

You should not neglect your dog’s eye health, as the eyes are as important for our pets as they are for us.

Bumps or lumps on the eyelids of dogs can be scary and worrying, especially if it bothers our pets’ sight. Most eyelid bumps are common conditions, which are easy to diagnose and treat though.

In this article, you will find out what the bumps on dogs’ eyelids are, how dangerous they are, what you have to do, and how to treat them.

What Is the Bump on My Dog’s Eyelid?

The eyelids are skin folds that cover the eyes, protecting them against impurities or potential injuries. They are bordered by eyelashes, formed by curved hair follicles, which in turn contain sebaceous glands.

When something happens or changes at eye level, numerous medical conditions can occur. These manifest themselves as bumps on dogs’ eyelids.

Dogs’ eyelids should generally be uniform, without swellings, bumps, or lumps.

Bumps on dogs’ eyelids usually look like nodules, swellings, or outgrowths. In most cases, they are bacterial, viral, or fungal infections. Once the infection is treated, the bump goes away.

If you notice a bump or swelling on your dog’s eyelid, here is what it could be:

Chalazion (or meibomian cysts) occurs when the meibomian glands get clogged. Meibomian glands are oil glands located in the eyelids, which secrete lipids that mix with tears and favor the lubrication of the cornea.

In other words, the Meibomian glands keep dogs’ eyes moist.[1]

Inflammation (chalazion) occurs when the opening of the gland becomes clogged and oil accumulates inside the gland. Meibomian glands can become clogged for many reasons:

Chalazion appears on the lower edge of the upper or lower eyelid. This inflammation is neither infectious nor painful and occurs more frequently in old dogs.

Styes (internal or external) are often confused with chalazia. The main difference is that a stye is an infection, while chalazia are clogging of the meibomian gland.

Hordeolum is painful to the touch and has bacterial causes. The infection is often caused by Staphylococcus aureus.

Styes are smaller than chalazia and look more like pimples than growths.[2]

Blepharitis is an inflammation of the sebaceous glands on the eyelids. It usually affects both eyes, along the edges of the eyelids.

Inflammation occurs when the tiny sebaceous glands (at the base of the eyelashes) are obstructed. This causes irritation and redness of the eyelids.

Several factors can cause blepharitis:

Blepharitis is often a chronic condition as it’s difficult to treat. It can be aggravating, possibly affecting dogs’ vision.[3]

It usually does not cause permanent eye damage and is not contagious.

Infectious blepharitis is most often caused by staphylococci or streptococci.

In bacterial infections, the Meibomian glands can also be affected.

The mites responsible for demodectic mange (Demodex canis) and sarcoptic mange (Sarcoptes scabiei) can cause inflammation of the eyelids.

Demodex canis is a vermiform mite with a wide mouth (rostrum) and four pairs of atrophied limbs that live in hair follicles.

This parasite can normally be found on a dog’s body. As long as your dog has a good immune system, the Demodex mite will not multiply.

It most often affects young dogs. In dogs around 10 months old, demodectic mange usually occurs around the eyes.

These injuries are often infected with bacteria that lead to swelling, bumps on the eyelids, and eye discharge.

In old dogs, demodectic mange causes hair loss in patches all over the body.

Sarcoptes scabiei is the mite that causes sarcoptic mange. It is oval and is found in the upper layer of the skin where it digs to make tunnels.

These mites move under dogs’ skin and cause intense itching.

Sarcoptic mange is also transmitted to humans and other animals.

Another type of parasitic blepharitis is caused by flies of the genus Cuterebra (also known as bot flies or warbles)[4]. They usually affect rodents and similar animals, but cases have also been reported in dogs and cats.

This type of fly lays its eggs near rodent burrows, where rodents, dogs, or cats can pick them up on their snouts or fur while sniffing. Once on a dog or other animal, the eggs embed themselves in the skin and transform into larvae within a few weeks.

They are usually found in the nose or around the eyelids of pets. Here, they cause swelling (nodules) and pain.

Viral papillomas, also called warts, are white, pink, or pigmented growths.[5] The infection is transmitted through contact with an infected dog. The incubation period for the virus is 1-2 months and they appear especially in young dogs. Papillomas can resolve spontaneously 1-2 months after they appear.

Warts are benign tumors that usually have a pedunculated, cauliflower-like appearance. They are generally found in and around the mouth, less often on the eyelids, or between the toes.

For this reason, it is recommended not to let your dog play with dogs with papillomas. You should also keep your dog away from their toys, water, and food.

Dogs have two lacrimal glands in each eye. One is located on the upper eyelid, and one is on the lower eyelid. The lower eyelid also contains the “third eyelid”: the nictitating membrane that protects and moistens the cornea.

Hyperplasia of the third eyelid gland in dogs (or cherry eye[6]) is inflammation of this membrane. It is a common condition in dogs.

It especially occurs in the following breeds:

The most obvious symptom of cherry eye in dogs is the red, swollen growth in the inner corner of the eye, which can appear suddenly. The condition can progress quickly and get worse if the dog scratches or rubs its eyes.

Several types of tumors affect the eyelids of dogs and cause localized or diffuse inflammation. Most tumors are benign and usually appear in dogs over 10 years old.

The most common eyelid tumors in dogs:

How to Treat a Bump on Your Dog’s Eyelid

Eyelid bumps should always be treated by a veterinarian and according to its recommendations. Don’t try to treat them at home without guidance as you can do more harm than good.