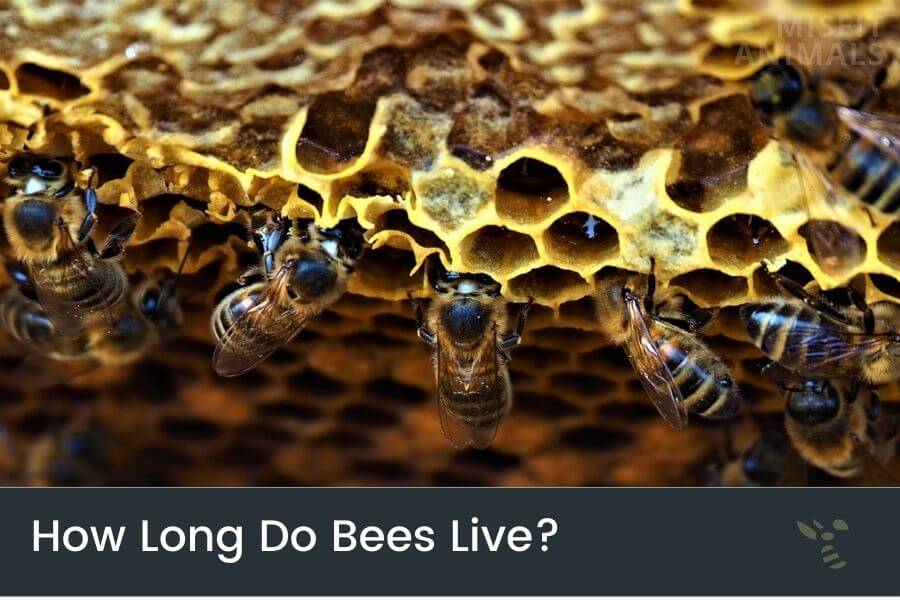 The lifespan of bees depends on their species and caste. A honey bee worker lives, on average, about six weeks, while the queen may live up to five years. Honey bee drones live approximately six weeks as well.

In this article, we’ll dive deeper into the lifespan of different species, and the different types of bees.

How Long Do Honey Bees Live?

A honey bee worker lives for two to six weeks on average during the summer, while they may live up to four months during the winter.

This depends both on the time of year, available food, the health of the hive, along with other factors.

Worker bees can live for up to six weeks during the summer and up to four months during the winter. Their life expectancy is based on how much work they do. The more work they do, the shorter their lifespan.

When worker bees are born during the summer, they have a very busy life ahead of them.

During spring- and summertime, bees are busy collecting nectar and pollen, making honey, and taking care of their hive.

During the winter, their activity levels decrease. During these cold months, they primarily sit around in clusters, trying to keep warm. Hence, they use up less energy, allowing them to live longer.

Honey bee queens live for 3-5 years, though only 2-3 of these are productive. Their maximum life span is about 8 years.

The queen honey bee is the most important member of the colony. She is responsible for producing and laying eggs. As she gets older, her reproductive capabilities decline. [2]

Some sources believe that queens only live for 1-2 years, though this varies depending on the species.

Drone honey bees live for 55 days on average during their active season (April and May in most places). Their lifespan is determined by when they take flight for mating.

Drones live short lives due to the fact that they die right after mating. [3]

How Long Do Bumblebees Live?

Most bumblebees live for about 28 days on average. The workers are only alive during spring, summer, and early fall, as they die before winter.

Some species of bumblebees are active all year round. This depends on the weather conditions. If it’s warm enough, workers will also live through the winter.

Bumblebee queens live much longer lives, though still shorter than that of the honey bee queen.

Related: How long do bumblebees live?

Bumblebee workers live for 28 days on average. During this time, they will work tirelessly to pollinate flowers and help the colony grow.

Bumblebee workers live very short lives, and are only around during the summertime. When fall comes around, no more workers will be born, hence they all die out.

Bumblebee queens live for a year on average. They’re born in late summer or early spring and die around the same time a year later. Before they die, they lay eggs for new queens.

As fall comes around, new bumblebee queens are born. These are virgins and will fly out to mate. Instead of returning to their hive, they’ll find somewhere to spend the winter.

Bumblebee queens hibernate, unlike most other bees. They’ll feed on as much nectar and pollen as possible beforehand, and then sleep their way through the cold months.

Where Do Bumblebees Live?

Bumblebees live in nests, mostly underground. They dig holes in the ground or use holes dug by rodents. Here, the queen will lay eggs, and the workers will care for the brood.

Related: Where Do Bumblebees Live?

How Long Do Solitary Bees Live?

The average lifespan of a solitary bee is around four to six weeks. However, some species can live up to a year. Solitary bees play an important role in pollinating flowers and crops.

How Long Do Carpenter Bees Live?

Carpenter bees have long lives compared to other bees. The average lifespan of a carpenter bee is about one to two years, while the queen may live up to four years.

Bees’ lifespan differs depending on the conditions around them. This includes:

Health of the Hive

The health of the hive is a huge factor in the lifespan of bees. If there are any illnesses, diseases, pests, or stressors on the hive it can decrease their life span substantially. [4]

Beekeepers often avoid causing their bees stress as much as possible. This includes avoiding stressing them when extracting honey and generally leaving them alone.

Parasites can affect the bees’ life span by weakening them and making them more susceptible to other infections or diseases. Parasites may also directly cause bees to die. [5]

If bees are affected by parasites, they may also display strange behavior, such as being up at night or turning aggressive faster. It’s important to get rid of parasites quickly.

Weather can be a direct and indirect factor in the survival of bees. If the weather is harsh enough, such as extreme temperatures, it can kill bees. This is a direct impact.

Indirect impact includes weather that causes flowers to bloom later. If the weather gets cold quickly, it may also affect bees’ survival chances during the following winter.

Related: Where Do Bees Go In the Winter?

Nectar is a sweet liquid produced by flowers and used by bees as food. It is the primary source of carbohydrates for honey bees. The availability of nectar can affect the life span of bees severely.

Bees need a constant supply of nectar to survive. When nectar is in short supply, bees may not be able to get the food they need to stay alive. This can lead to starvation and death.

There are several predators (mostly birds) that prey on bees. They hunt and eat them. These are carnivores, looking for a quick meal.

Other predators include honey-stealing insects or animals. An example of this is wasps. Wasps invade bee nests and steal honey, which can lead to starvation for the bee colony.

Bees go through 4 stages in their life: egg, larva, pupa, and adult bee. Depending on the caste, they spend a various amount of time in each stage.

Eggs are laid by the queen bee and hatch into larvae. As the larvae grow, they’re sealed in a honeycomb cell, where they’ll continue to grow, eventually turning into pupae. After a couple of days as pupae, they turn into adult bees.

Queen bees have a slightly different upbringing compared to workers. Instead of being fed nectar and pollen, they’re primarily fed royal jelly. This enables them to reproduce when they turn into adults.

What Is the Longest Lifespan of a Bee?

The longest lifespan of a bee is around 8 years. Only queen bees can get this old. Worker bees will die much sooner than this.

If a queen bee is given an ideal setup, she can live up to eight years. However, this is quite rare. Most queen bees only live for around two to three years, sometimes five.

Bees live for six weeks on average. Depending on the species, and the caste, this may vary from two weeks to five or six years. Bumblebees typically live shorter lives than honey bees, as their queen only lives for a year.

There are several factors that can affect the lifespan of a bee, including parasites, the health of the hive, the weather, food availability, as well as predators.