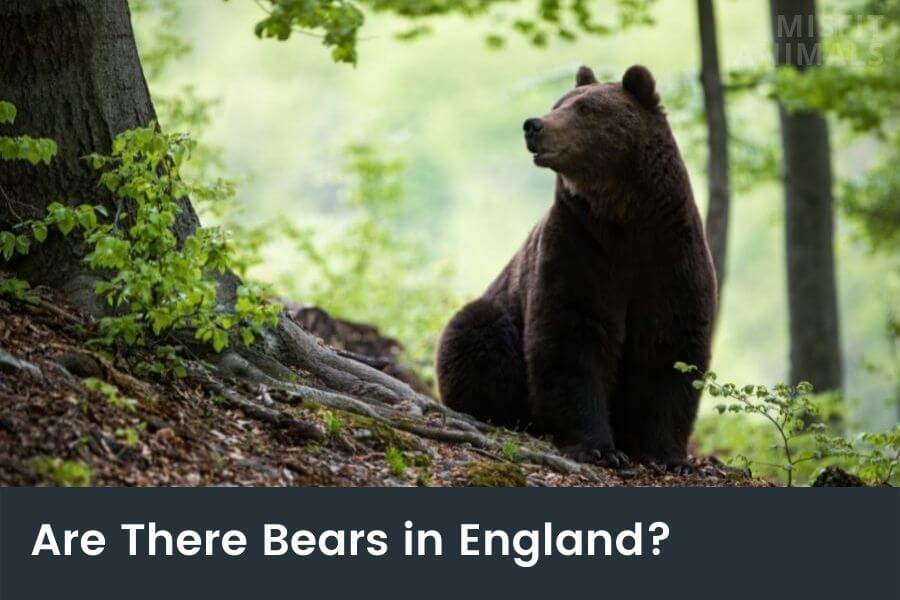 There are no bears in England today. Once upon a time, there were about 13,000 brown bears roaming the British woodlands, however, they went extinct about 1,000 years ago. Since then, bears haven’t lived in England.

Bears are widely distributed. When first emerging as a species (about 20 million years ago), they roamed North America.

From there, they spread across the world, inhabiting America, Europe, and Asia.

But what about England? Are there any bears there? If not, were there bears in England once?

Those are some of the questions we’ll discuss in this article.

Are There Bears in England?

There are no bears in England today. They went extinct 1,000 years ago. Before this time, they were a rather common sight.

Bears have a long and complicated history in England. The brown bears that used to live there were once considered native, but now they are classified as extinct.

There are many theories about why the bears went extinct, but the most likely explanation is that human development threatened their existence.

Ever since humans started invading their territories, the population declined.

Despite being extinct for hundreds of years, bears continue to capture our imaginations. They are often portrayed in stories and legends, and many people still hope that they will one day return to England.

There are even some groups who are working to reintroduce bears into the British countryside.[1]

Nowadays, bears can be found in other countries and continents, including North America, South America, the Arctic, Europe, and Asia. There are also no bears in Africa or Australia.[2]

Why Are There No Bears in England?

There are several reasons why bears disappeared from England, such as them being hunted, human settlements, and a lack of territory.

Some of the main reasons why there are no bears in England today are:

Bears have been killed for centuries by hunters who saw them as a threat to livestock or simply as trophies.

The deforestation of Britain also played a part in their decline – without trees to provide them with shelter, bears had fewer places to hide from humans and were easier to hunt.

Another factor that contributed to the bears’ extinction was climate change. The warmer weather that we are experiencing now means that bears can no longer survive in England – they need cooler climates in order to hibernate properly.

There is still some debate over why bears went extinct in Britain, but it is clear that a combination of human activity and changing environmental conditions led to their demise.

Were There Ever Bears in England?

There is some evidence that bears may have been in England as recently as 1,000 years ago[2], but they are now extinct. Brown bears were the only type of bear found in England, and they mainly lived in the woodlands.

The distribution of bears in England changed over time.

In prehistoric times, bears were found all over the country. However, by the end of the last ice age around 11,000 years ago, their range had narrowed to the woodlands in the south and east of England.

By medieval times, bears were only found in forested areas in central and southern England.

Which Bears Lived in Britain?

The only bears that lived in Britain were brown bears. More specifically, it was the Eurasian brown bear (Ursus arctos arctos).

Bears began to migrate into Great Britain after the last ice age. The only bears that lived in Britain were brown bears.

The Euroasian bear, which can be found in other places throughout Europe, once lived in England. It’s a subspecies of the brown bear, which is very large, one of the largest land predators.

Where Do Bears Live In the World?

There are bears in many different parts of the world, including North America, South America, Asia, and Europe.

In North America, bears live in Canada, Alaska, and the lower 48 states. These are brown bears, black bears, and even polar bears.

There are also bears in Mexico, Central America, and South America, more specifically the spectacled bear, but their numbers are declining.

Bears are found in North America, and there are different types of bears that live in different parts of the continent.

The bears in North America live in different parts of the continent because they evolved differently over time.

Asia is home to five of the world’s eight bear species.

Of these, six are listed as vulnerable, endangered, or critically-endangered on the List.

The five bear species of Asia:

Bears have been present in Asia for tens of millions of years. They evolved from bears that crossed over to Asia from North America during the ice age.

Bears used to be widespread all across Europe, but their distribution today is much more limited. Brown bears are now found in only a handful of countries in the continent, including Romania, Bulgaria, Slovenia, and Croatia.

The bears in these countries are typically forest-dwellers, although they can also be found in mountainous areas.

One of the most interesting things about bears in Europe is their genetic diversity.

Bears in England were hunted to extinction around 1,000 years ago. There are no bears living in England today, but there is evidence that they once roamed the woodlands throughout the British Isles.

Bears can be found all over the world, with different species occupying various regions. The brown bears that used to live in England were a subspecies of the European brown bear.