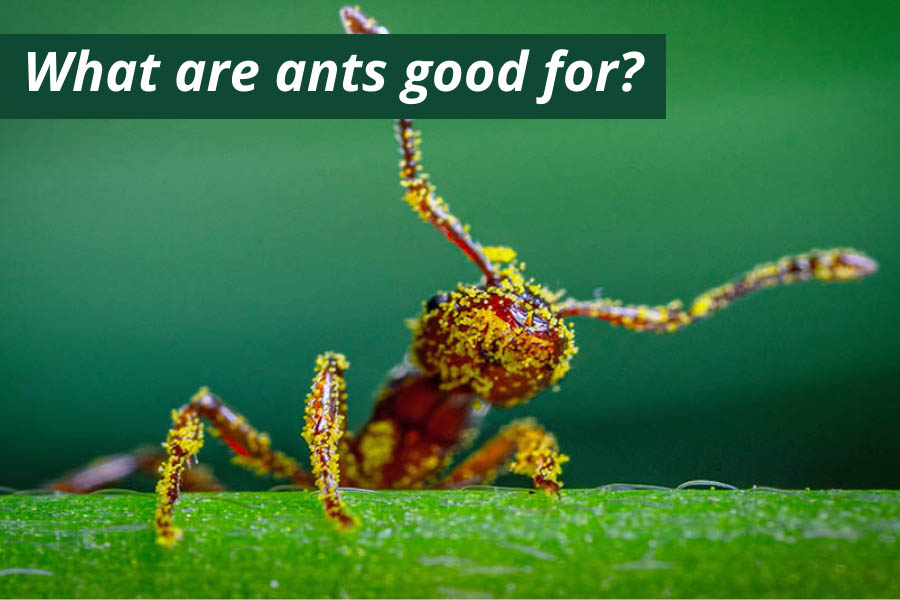 Ants have a significant impact on the ecosystem.

They move the soil and aerate it, allowing water and oxygen to reach the plant roots. These seeds frequently germinate and produce new plants (seed dispersal).

Ants also consume a wide range of organic materials and serve as food for a variety of species. They’re frequently referred to as “ecosystem engineers” because they provide a variety of critical ecological functions.

Ants are just interested in good, healthy meals and do not select their prey depending on its pest status. However, many of the creatures that ants consume are ones that we’d like not to see in significant numbers.

Ants will consume anything from ticks to termites if given a chance and will even swarm on more giant arthropods like scorpions or stink bugs. Those annoying fire ants are very effective at pest management in agriculture areas.

What Are Ants Good For?

Ants are both good and bad for humans. Some ants, such as the fire ant, can be very harmful to people by stinging them or causing allergic reactions.

However, other species have a more beneficial effect on us, including providing pollination [1] services which cause an increase in yield from crops.

It is difficult to imagine what life would look like without ants. They play vital roles in many different aspects of the ecosystem: seed dispersal, food chains, and farming. Without these tiny creatures, we could survive, but it would certainly not be easy.

How Do Ants Benefit Humans?

Ants have the potential to benefit both humans and the environment. Ants, like earthworms, contribute to the formation of good topsoil. Ants aerate and turn over the soil by excavating nests and tunnels, bringing nutrients closer to the surface.

Although earthworms are given all of the credit, ants perform a better job of enhancing soil structure than worms. Ants substantially improve the soil by building nests and tunnels in the ground. They disperse nutrients as they move soil particles about, and they promote air and water circulation in the soil.

What Do Ants Do for the Environment?

Ants have a significant impact on the ecosystem. Ants move the soil and aerate it, allowing water and oxygen to reach the plant roots. Ants carry seeds down into their tunnels to consume the nourishing elaiosomes found in the source. These seeds frequently germinate and produce new plants.

In the garden, they kill tiny larvae and freshly born plant-eating bugs to eliminate unwanted pests to your plants.

Ants also destroy a significant number of insects, making them more effective than some insecticides. The average garden ant does not consume or aggressively damage plants as caterpillars do.

What Do Ants Do for Agriculture?

Ants are essential to soil agents in agricultural systems because they contribute to aeration and fertilization, improving soil quality.

When ants collect food, they need to store it. They do so in and around their nests, contributing organic materials to the soil. They also excrete waste and leave food leftovers, all of which alter the chemistry of the ground—usually for the better.

Ant-affected soil is often closer to neutral pH and higher in nitrogen and phosphorus.

If leafcutter ants are the ant world’s vegetable growers, herder ants are the herders. In the same manner that humans maintain cattle, these ants keep aphids, which consume plant nutrients and produce a sugary fluid called honeydew, which the ants consume.

What Do Ants Do for the Food Chain?

Ants play an essential role in the food chain at both the lower and higher trophic levels. Ants are the primary food supply for many species, including:

YES, some indigenous people consume ants as a supplement to their diet, but people typically don’t eat ants.

Like many other insects, ants are high in protein, containing several essential amino acids and some lipids and carbohydrates.

Why Are Ants Important?

Ants may help the environment in a variety of ways. By recycling dead animals, insects, and decaying materials and reintroducing nutrients into the soil, ant colonies aerate and enrich the ground, resulting in a stable ecosystem.

Ant tunnels improve water penetration and circulate air in the earth, which benefits the soil and plant roots.

Ants aid in pollination by moving from one flower to another; ants are also natural termite pest control agents for flowers, as they eat herbivore insects.

Harvester ants dump sprouted seeds onto garbage heaps around the mound when the seeds they stored inside them sprout.

Can We Live Without Ants?

Entomologists and ecologists say that we cannot survive without them. Ants exist in terrestrial environments throughout the world, and scientists have identified and named over 12,000 Formicidae species. An ant colony may include over 20 million ants.

Ants contribute to soil decomposition and churn up more dirt than earthworms. Ants aerate the soil and recycle nutrients by digging tunnels. This action is vital for sustaining good earth for plant (food) growth.

What Would Happen Without Ants?

Many plants would perish. Many animals would die. To fill the gap left by the ants, other insects would become more prominent in the animal kingdom, even increasing in size and quantity. Some trees would dramatically overgrow, while others would just die.

The elimination of the ant would consequently result in decreased plant productivity and, ultimately, death.

Ants also help decompose dead insects and other tiny animals. According to studies, there is an increase in soil nutrients and organic matter near ant nests. As a result, rich soil promotes plant development.

What Is Bad About Ants?

Some ants are known to cause damage to wood, making them harmful to our homes, businesses, sheds, and valuables. Although being known as annoyance ants, others may be hazardous to human health and well-being due to their ability to spread harmful germs.

Many ants are poisonous (such as the fire ant, bulldog ant, and bullet ant), and some are disease carriers. Recent research indicates that the pharaoh ant may transport and spread pathogens including Salmonella, Staphylococcus, Clostridium, and Streptococcus.

Ants are Good Indicator of the Health of the Ecosystems

Ants are helpful ecological indicators [2] because they interact with many other species, such as eating spiders or building nests that serve as microorganism habitats. They affect critical processes such as nutrient cycling and seed dispersion. Their statistics are mind-boggling. If you had a large enough scale and weighed all the creatures on Earth, ants would account for 15 to 20% of the total biomass [3].

Ants, like other insects, reproduce swiftly, cycling through generations considerably quicker than mammals and other animals. Ants, in general, respond quickly to changes in their environment, and as such, they may be utilized as indicators for a wide range of other species.

Regardless of how long it takes to restore habitats ravaged by mining or farming, one thing is sure: Ants of one sort or another will be marching, eating, and changing the ecosystem, ready to speak out if only people had the foresight to ask them how things are going.