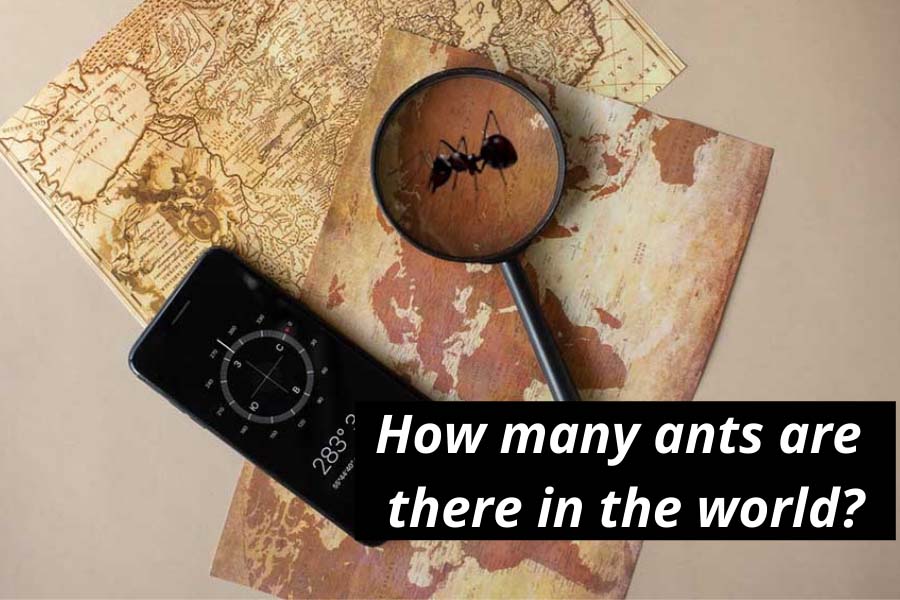 There are more than 20 quadrillion ants on earth (20 million billion). This enormous amount of isects is spread out over more than 12,000 different species of ants on Earth.

Ants are social insects and can be found in almost every habitat worldwide, from deserts to rainforests. They live together in colonies that range from a few dozen individuals to millions of ants.

They have been around for at least 50 million years, a testimony to their survival skills. This is also a reason why there are so many now.

They are great for the environment and play a vital role in ecosystems. Ants help plants grow by fertilizing them with droplets of nectar they carry from flower to flower. They also serve as an important food source for birds, lizards, scorpions, wasps, and spiders.

How Many Ants Are There in the World?

The total ant population worldwide is estimated at around 20 quadrillion ants, which is more than the number of stars there are in our galaxy.[1]

Ants are one of the most successful species on Earth, with over 12,000 different species living primarily in terrestrial habitats.

There are two main types of ants:

Social ant colonies live together in a central nest where they cooperate to protect themselves from predators. Lone ants do not have this luxury and must fend for themselves. Most people only see these during their travels, but it’s expected that some will find them nesting under or inside your home.

How Many Ant Species Are There in the World?

There are over 12,000 different species of ants on Earth.

Some countries have as many as 750 unique ant species, while others only have a handful of these insects living in their natural habitats.

The number of ant species in a country is correlated with its size and the amount of natural habitat available for the ants to inhabit.

Ants are social insects, and they live together in a colony. The size of the ant colony (physical size) depends on how many ants there are, but it can range from just a few dozen of ants to millions of ants, all sharing the same nest.

Ant colonies have queens, drones, workers, and soldiers that all work together for the common good, which is one of their secrets to staying alive for so long.

There are only seven species of carpenter ants in North America, and they have limited distribution across 21 states.

Yet this number isn’t even close to half the known number of Carpenter ant species worldwide, which currently stands at over 1.000 different types [1] with their populations spread out among almost every continent on this blue marble we call home.

How Many Ants Are There in An Ant Colony?

The number of ants living in a colony varies based on the species and where they live. Most colonies have between 50,000-500,000 individuals, but some are home to millions of these insects.

Ants can also be found crawling around your house or backyard during the summertime months when their populations tend to explode due to warmer weather conditions that suit them better than older ones.

It’s the social ants that live together in colonies. Solitary ants do not have this luxury and must survive on their own.

Where Do the Quadrillions of Ants Live?

Ants live all over Earth in terrestrial habitats, including:

Ants live on almost every continent around the world, from deserts to rainforests.

Carpenter ants make their nests in wood and can cause structural damage.

As long as there is an adequate food supply for them nearby, they’ll stay. Some ant species may be specific about what type of vegetation grows near their nests, while others will go out looking for it themselves if necessary.

There are generally around 100,000 ants per colony, and individual ants are found inhabiting just about any environment that suits them well enough, from deserts to rainforests and even suburbia if you have food for them nearby!

What to do if ants live in your house?

You may notice swarms of tiny insects crawling all over your furniture every now and then, which could very well be signs that their population has exploded because they’re reproducing at rates much higher than usual.

There’s no need to call pest control, though – these colonies will eventually die off after they’ve exhausted themselves by reproducing too much.

What Is the Ratio of Ants to Humans in the World?

The Earth has a population of 7 billion people. That’s a lot of people, yet it’s nothing in comparison to ants.

Please remember – these are estimates. It’s impossible to count every single ant.

Assuming there are around 2.870.000 ants per person on Earth, and that the human society will keep growing at the same rate as now, we’ll eventually surpass the ant population in just under 2.000 years.

What Is the Total Weight of Ants Compared to Humans?

Human beings weigh roughly around 100 pounds. Ants are just small insects, but they have a lot more surface area to live on. In total, that makes their weight heavier than humans, even though they only weigh a few milligrams individually.

The total weight of ants on Earth is estimated at around 3 trillion tonnes. The human population weighs about 350 million tonnes.

It’s safe to say that the bulk of our planet’s biomass consists mainly of these tiny insects and their colonies.

Insects make up roughly two-thirds of all living things on this planet, with ants being one of the most populous groups among them.

How Many Insects Are There in the World?

There are around 2 million to 30 million species of insects on Earth [3], yet Scientists have only been able to fully identify about 900 thousand different types of these tiny creatures so far. This means that there could be as many as 29 million more waiting for them in the world we haven’t yet seen.

Ants alone make up 12% of all the documented insect populations.

With such an overwhelming number living near us at any given time, ants will forever remain the most populous insect on our planet.