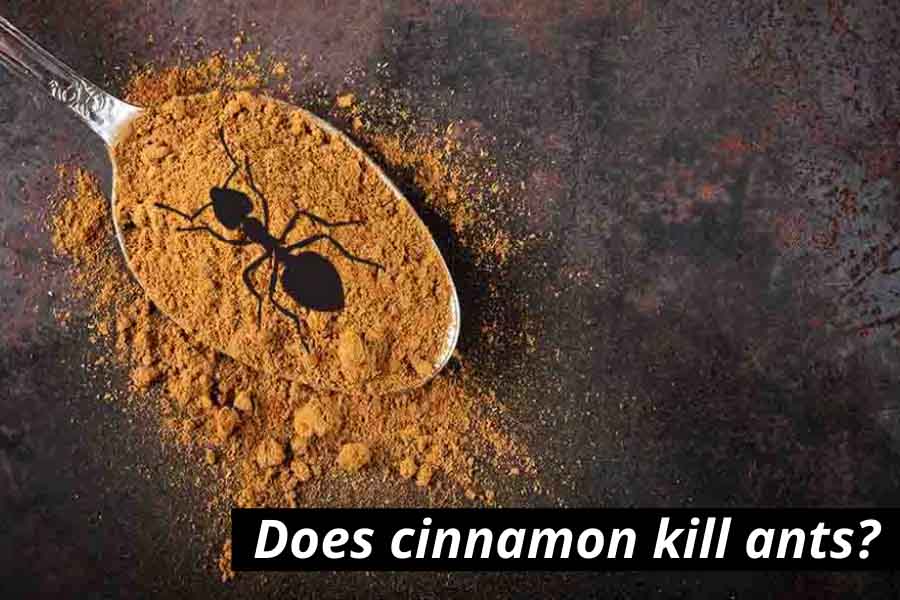 Cinnamon oil can kill ants, but powdered cinnamon is more effective at repelling them. The cinnamon creates an unpleasant odor that the ants want to stay away from.

Ants are persistent pests that can be difficult to get rid of. This is because they reproduce quickly, and cinnamon oil only drives ants away temporarily.

The best way you can use cinnamon to get rid of these pests is with essential cinnamon oil. This is best used diluted as cinnamon oil is quite potent.

In this article, we’ll go more into detail about how cinnamon can be used as a defense against ants.

Will Cinnamon Get Rid of Ants?

Cinnamon is a great way to get rid of ants. Cinnamon oil has been known to be effective against many different types of insects, including ants. A study shows that essential cinnamon oil can both repel and kill (to some extent) ants [1].

Cinnamon in powder form doesn’t kill the ants that well. But, it does repel them and can keep more from coming back.

It is also a popular remedy as it can be used around pets or children.

When using cinnamon, you should use cinnamon oil extract. It should be diluted at a ratio of 1-20%, depending on the severity of your problem.

Then you can use a spray bottle or mister and apply that solution around your home where ants may enter or gather.

Cinnamon comes in multiple forms. The best way to use cinnamon as pest control is essential oil extract diluted in water.

The essential oil is much stronger than the powdered version. This means it has a more potent smell that will get rid of ants faster.

It’s unsure whether the powdered version works against ants. Some claim that it can suffocate the ants as they inhale it.

No, ants don’t like cinnamon because of its strong smell.

Ants rely heavily on their sense of smell, both for foraging and communicating. Very strong smells disturb them, which is why they tend to stay away.

This is one of the factors that make cinnamon great at keeping ants at bay.

Other smells that ants hate are lavender, peppermint, and coffee.

How Does Cinnamon Against Ants Work?

Cinnamon has an organic compound known as cinnamaldehyde. Cinnamaldehyde is what gives cinnamon its smell and taste but also acts as a natural repellent that ants hate.

The cinnamon oil repels the ant colony without killing them, while also being safe for children or pets. Furthermore, cinnamon can help drive away other insects, such as cockroaches, fleas, and moths.

In strong concentrations, cinnamon oil can kill ants, but this is less effective than just using it as a repellent.

While cinnamon oil can kill ants, cinnamon itself typically doesn’t. The cinnamon powder acts as a repellent to keep ants away from an area, rather than killing them.

If you use too much cinnamon in one place and the smell becomes overpowering for the ant colony, they will start looking for another area to set up their home.

Place cinnamon oil on cotton balls and put them in places where ants enter your house. Common places include windowsills or baseboards of rooms near doors that lead outside. You can also mix it with water and spray it around the area.

To kill ants with cinnamon oil, the method is the same except you’d need a higher concentration of the essential oil.

How Long Does It Take for Cinnamon to Kill Ants

Why Use Cinnamon Against Ants?

Cinnamon is a good remedy against ants for several reasons:

Cinnamon oil is an inexpensive way to rid your home of ants. A single bottle of cinnamon essential oil will last you for years, and won’t set you back a lot of money.

Cinnamon is a wonderful, natural way to get rid of ants. Not only does it repel them, but cinnamon oil can also kill the little buggers. Though cinnamon isn’t toxic for humans or pets in small amounts, make sure you dilute the cinnamon with at least 90-99% water before applying it to your floors or any surfaces in the house.

How to Use Cinnamon Essential Oil Against Ants

Cinnamon oil can be used in several ways to control ants:

1. Locate the Source (Where Ants Enter)

The very first step to cinnamon oil against ants is finding out where they are coming in from. People tend to assume that the whole house has ants when it is only one area of their home that is infested with the bugs.

To do this, either follow the ants, when they leave your house or go from entrance to entrance to check for signs of ants.

Mix cinnamon oil with water at a ratio of one part cinnamon essential oil to 99 parts water. Dab the mixture on all the areas where you see ants crawling, or dilute it in a spray bottle and spray it around your home. The cinnamon will not kill the ants but can repel them so they do not become pests in your house.

The best place to apply the cinnamon oil is at the ant trails. Ant trails are pathways the ants have marked with pheromones, to let other ants know where to go to find food.

If you can get rid of these ant trails, you’ll have a much higher chance of success.

Start by wiping down the affected surfaces and entry points to remove any ants. You can follow this up with cinnamon oil, which will deter them from coming back.

What Else Can You Do?

While cinnamon may help you get rid of ants, there are other natural ways to control the pests. One way is by using borax powder. However, when working with any type of pest-control substance, always follow safety precautions and wear protective gear such as gloves and a mask in order to avoid poisoning or allergic reactions.

There are many other natural remedies that can help you get rid of ants. One option is to use coffee grounds, which repels the pests.

Another way to kill ants without using chemicals is to put out small bowls filled with peppermint oil.

A lot of people also swear by vinegar as a great remedy against ants.

Or, if you want to kill the ants, boiling water will kill ants instantly. The best way to use this method is by pouring boiled water directly onto the ant colony. This will get rid of the nest, instead of just getting rid of the creatures that have invaded your home.

Ants are easily killed by chemical solutions. There are plenty of options to pick from. Just go to your local store and pick up some insecticide.

The last way to get rid of ants is to call pest control. They will know what to do and how to fix your problem.