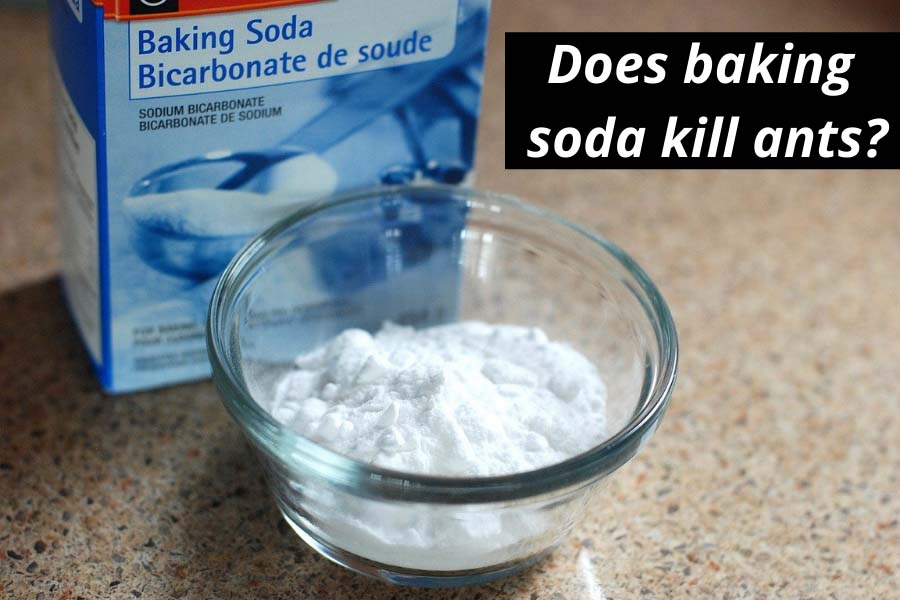 Baking soda is a chemical that can be used to poison and kill ants both in its raw form or by creating a mixture with other harmful chemicals that have specific effects on an ant’s body.

You can mix it with:

The baking soda works as an alkaline substance that absorbs moisture from any organism it comes into contact with, including insects like ants. This dehydrates them through osmosis, killing them over time while leaving your home unharmed.

In this article, we’ll go more into detail about how to use baking soda to get rid of ants.

Yes, Baking soda does kill ants. When they eat the baking soda, the chemicals in it make them die by triggering a chemical reaction within their bodies, changing their pH levels (the ant’s natural defense system is acidic).

The most effective way of using baking soda against ants is making an “ant bait” or trap with it.

To do this, combine sugar with water and mix in three parts baking soda until you get a thick paste-like substance that does not drip easily.

Place small portions of the mixture into small containers such as plastic cups, lids, or bottle caps. Then, place the containers near places where there are visible signs of ant activity. This can be ant trails or near the ant nest.

Also read: How to get rid of ants

What Is Baking Soda?

Baking soda is the common name for sodium bicarbonate and is an alkaline white powder.

The great thing about using baking soda as an ant killer is that it will keep working if it rains since the water does not affect how well baking works at killing ants.

Another bonus of using baking soda instead of any chemicals, when trying to kill ants, is that there are no harsh fumes or poisonous elements in baking soda.

This means that people who are sensitive to chemicals, or people who have pets or small children, can still use this without worrying about having an adverse reaction from the chemical usage in sprays and pesticides.

The Science Behind Killing Ants With Baking Soda

This does not harm humans or other animals because our bodies are able to handle this type of reaction whereas ants are not.

How Does Baking Soda Kill Ants?

Baking soda can kill ants because of the chemical reaction it has with the acid inside an ant’s stomach. When baking soda is mixed with liquids in ant bodies, a chemical reaction happens between the two substances which release carbon dioxide gas bubbles.

Insects’ exoskeletons are made up mostly of a substance called chitin, which does not let carbon dioxide pass through it very easily either. Ants also breathe through holes in their bodies called spiracles. These only work one way, meaning, they can’t breathe in if something is on the way out.

So when a little bit of baking soda mixes with ant stomach acid and causes the release of large amounts of CO² gas bubbles, the ants can’t breathe, and the carbon dioxide can’t get released fast enough.

Because this gas does not get released quick enough, pressure builds up and bursts the ant’s insides.

In fact, there are lots of insects that die from this reaction.

How Long Does It Take Baking Soda to Kill Ants?

Baking soda does not kill ants immediately, it kills them over time which is something to keep in mind.

How Effective Is Baking Soda for Killing Ants?

Baking soda does not kill ants immediately. If an ant ingests a large amount of baking soda, they will die within one hour because their bodies cannot process a large concentration at once.

If you’ve been trying to use baking soda for killing ants, but the process does not seem effective enough, remember that patience is a virtue. Since it isn’t instant death, you’ll have to wait for results.

While baking soda is not as effective as chemical insecticides, it does the job in most cases. If you don’t get the results you were expecting, you should consider calling an exterminator.

How to Use Baking Soda to Kill Ants: Step-by-Step

Create a baking soda mixture by adding two tablespoons of baking powder into one cup of water. Stir the two ingredients together until they are completely dissolved and mixed thoroughly.

It’s a good idea to add some kind of sugary food to the mix. This will make sure that the ants are attracted to it, which will give you faster results.

You can either use pure sugar, mixing it with hot water before adding in the baking soda, or you can use something like syrup, which doesn’t have to be boiled.

2. Find Out Where the Ants Are Coming From

It is essential that you learn where the ants are coming from in order to get rid of them. If you already know where the nest is, great. If not, find a larger concentration of ants. They will usually be following a trail back home.

If you see multiple trails or think there may be more than one entry point for the ants (like a window sill or if you have multiple doorways), make sure to check your home thoroughly.

3. Pour the Mixture Into Around the Entrance Points

Once you have found all of the entry points for your ant infestation, make sure to pour around two tablespoons worth of baking soda mixture in each area.

Remember that this does not kill ants immediately; it just makes it harder for them to get into your home and eventually kills them off.

Be patient with the process. You may think that nothing is happening when you see an ant still moving around after ingesting baking powder but keep in mind that sometimes things do take longer than what we want or expect.

When more time has passed (usually about 24 hours), go back and check on any areas where there was a possible issue. If you find any dead ants in these areas, you can take that as a sign that it’s working. You can also check for a decrease in the activity level, which will tell you the same thing.

Remember to clean any areas where the baking soda mixture was poured because if there is leftover powder, it can dry up and cause damage to your home so make sure you wipe everything down!

4. Fill Up Any Cracks

In order to make sure that your home does not have any cracks or holes for the ants to come back into, you can use a caulk gun and fill up all of those areas.

You may also want to purchase some weatherstripping if there are entry points where windows meet doorways. This is another possible route for the ants to take in order to get inside your home. Sealing these areas will prevent them from getting inside again.

This process does require time, but it’s important if you want to make sure that you won’t get the same problems with the little creatures in the future.

Baking Soda does not only kill ants but it can be used around children and pets without any negative effects.

Since baking soda is a natural compound, it’s eco-friendly. If you decide to use it near plants or flowers, you don’t have to worry about damaging them. The baking soda won’t affect your plants.

Baking soda is a simple and easy solution to killing ants. It does not require any fancy or expensive equipment, nor does it have any negative effect on the environment. The only thing that you will need in order to use baking soda as an ant killer is yourself, some baking soda, and a bucket of water.

Most people want to get rid of ants as fast as possible – and with this solution, you don’t have to spend much time with your ant-killing efforts.

Just be aware that baking soda isn’t always effective. Sometimes the ants won’t be as affected as you might hope. In this case, you should consider calling pest control.

Yes, baking soda kills ants. Baking soda is a great solution for killing ant colonies that are around your home or yard.

It takes about 24 hours on average to completely eliminate the colony of an ant infestation using baking soda, but it does work extremely well and can be used in conjunction with other methods of getting rid of ants if needed.

This method also doesn’t leave behind any dangerous chemicals which means you don’t have to worry about children or pets coming into contact with them later down the line.

Yes, baking soda can kill carpenter ants, just like any other ant species.

Carpenter ants are most likely to attack after it rains. They eat moist wood, which is why you see them in your home when there has been a previous leak or high humidity levels during the rainy season. One of their favorite foods is honeydew secretions from aphids and other insects.

Also read: How to get rid of carpenter ants

You don’t have to use powdered sugar though. Any type of sugary food can work, such as plain granulated sugar, syrup, or anything like it. Just make sure you use enough baking soda to get rid of the ants.

The scientific explanation as to why baking soda kills insects and other pests is that it interferes with the ant’s acid-base balance, which leads to metabolic damage and ultimately death. To use this method against fire ants, you can combine one part of sodium bicarbonate (baking soda) into two parts of peanut butter or jelly mixed together in a bowl. Then apply the mixture to a plastic lid, whereafter you can place the lid near an ant nest or the ant trails.