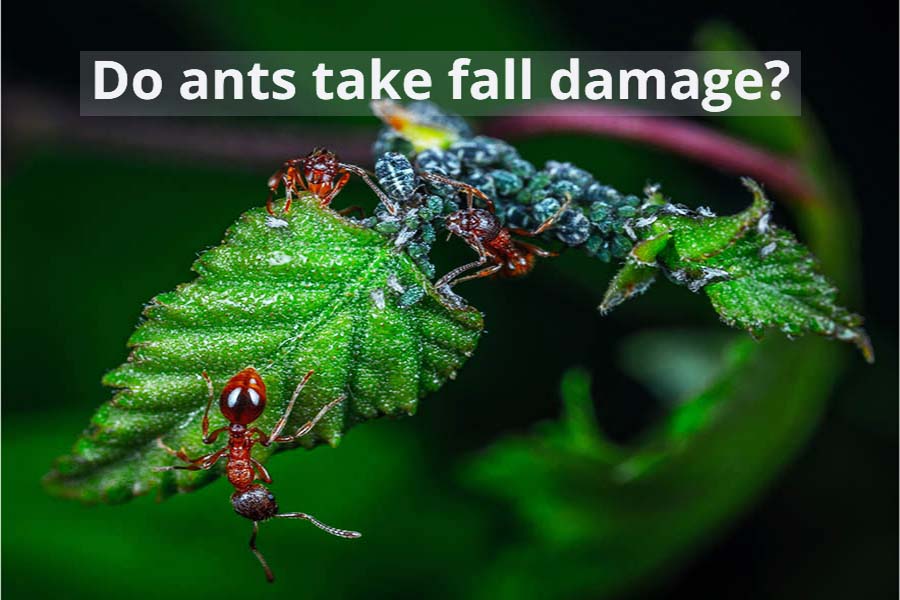 No, ants do not take damage from falling. They can survive falls of all heights (in theory) if you don’t factor in the cold temperature and lack of air above a certain level. Because of their small body size and weight, their terminal velocity is too low to kill them upon impact with the ground.

Ants are extremely light insects. As a result, as soon as you drop them (or within a few seconds), they achieve their terminal velocity.

The terminal velocity is the maximum falling speed, meaning they will continue to move at the same constant pace which, due to their anatomy, isn’t very fast.

In this article, we’ll go into more detail about how ants deal with falling.

Do Ants Take Damage From Falling?

No, ants do not take damage from falling. In other words, ants can survive falling from great heights.

The ant is both extremely light and small, which helps it survive when falling from great heights[1]. Their small size also means that their terminal velocity is reached fast, and they continue at the same constant pace.

In theory, ants can fall from any height without dying, but this hasn’t been tested to the extremes. This includes heights that would be fatal for humans or other larger animals.

It also seems like the longer they fall, their survival rate increases. These little guys are more resilient than most animals.

What Is Terminal Velocity?

A falling item in the air that is not affected by wind or other sideways forces has a maximum of two forces acting on it:

The weight does not change. This is known as the object’s final velocity.

How Fast Does an Ants Fall?

What Happens if an Ant Falls?

Nothing happens if ants fall. Since they don’t take any damage from falling, they won’t really get hurt.

In other words, they do not die.

They have a low terminal velocity, meaning that once the ant has fallen for about three seconds, it will stop accelerating and reach its constant velocity.

Because of their sluggish pace and the ant’s robust exoskeleton, which helps them brace for impact, they suffer no damage from falling at any height, and the impact would have been the same as if they had dropped a few centimeters.

Can ants die from fall damage?

No, ants can not die from fall damage. Not in theory anyways. Ants are very lightweight insects, and after just a few seconds, they achieve their terminal velocity and continue to move at the same constant speed.

It is almost physically impossible to kill an ant from a fall.

What Happens to the Exoskeleton After A Fall?

The exoskeleton is the hard outer shell that protects an ant’s body. This helps ants survive falls of any height without suffering damage or death. Because of the incredible strength of the chitin exoskeleton, it doesn’t take damage either. If it did, the ants would be severely injured, as the exoskeleton is the only thing holden them together.

A study was done in 2009 and found out what happened when ants were dropped from different heights onto solid wood flooring.

The outcome was quite interesting, as all of them survived with no injuries to their exoskeleton at all.

Do ants feel pain when they fall?

Ants do not take any damage from falling, but they do feel pain. Even though they might not get injured, the impact will still hurt. Just not as much as it would hurt a larger animal or a human.

On the other hand, they do not feel pain if they fall if the fall is small enough. Ants are very durable, so if they fall from just a few inches, it’ll have almost no impact on their small bodies.

Falling does create kinetic energy which can damage organs like the lungs and heart. When they impact with the ground, hitting something angled (like a sharp rock), they can take damage. This also results in pain and can shift their organs.

How High Can Ants Fall From and Survive?

Ants can, in theory, survive falls of any height, including more than 1000 feet. Ants do not take damage from falling because their terminal velocity is too low (6.4 km/h). As a results, they can jump from the Empire State Building, Eiffel Tower, or any other tall building, and survive.

Can an ant survive a fall from the Empire State Building?

What can ants climb?

Ants are amazing climbers. With adhesive pads, as well as claws and fine hairs on their feet, they’re able to climb almost anything.

Since they don’t take any damage when they fall, they don’t have to worry about how high they’re climbing – they can just keep going.

Also read: What can ants climb?