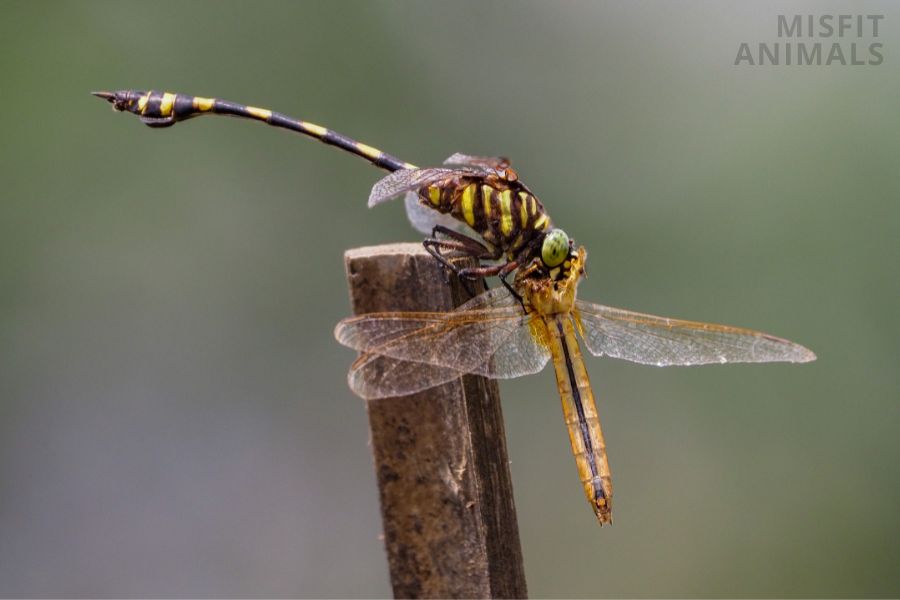 Mayflies have the shortest lifespan of any animal. Other short-lived animals include house mice, guinea pigs, honeybees, ants, shrimp, and bed bugs.

The world is full of a variety of animals. Some are large, while others are small. Each animal has an average lifespan ranging from a few days to more than a century.

An animal’s lifespan depends on several factors, such as its size, habitat, diet, and defensive abilities. Many animals are too weak to defend themselves, making them an easy target for predators.

This article lists the top 17 animals with the shortest lifespan.

Chameleons are reptiles that have the ability to blend in with their environment. There are more than 180 species of chameleons found across the globe.

The Labord’s chameleon has one of the shortest lifespans of all land vertebrates. They are endemic to Madagascar and have bright green skin. They live for a maximum of one year.

Labord’s chameleons are usually born in the month of November and reach maturity by early February. They grow up extremely fast and reproduce to pass on their genes to their offspring.

House mice are found in almost all areas of the world and are generally considered pests. They grow up to around three to four inches in length and prefer to stay near human settlements where they forage for food.[1]

With proper care and diet, house mice can live for up to three years.

These rodents are often hunted by predators, shortening their expected lifespan:

All these predators significantly lower the life expectancy of an average house mouse in the wild. They also chew electrical wires, get killed by mouse traps, or are poisoned, which further shortens their life.

Guinea pigs are one of the most popular rodents kept as pets across the globe. They are native to South Africa and have a short lifespan of up to four years.

They can live longer than four years depending on several factors:

The Chinese dwarf hamster is also known as the Chinese striped hamster. They are one of the smallest hamster breeds in the world and are commonly found in China and Mongolia.

Chinese dwarf hamster is brown stripes on their bodies with white underbellies. They also have a long tail that is the same size as their bodies.

These rodents live a short life of around two to three years, which increases when kept as pets.

They live in honeycombs made of wax which is often the target of predators such as badgers, bears, and other large animals.

Honeybees have a short lifespan of around six weeks. Drones and worker bees have short lifespans, while the queen bee lives longer due to constant care and protection by the hive.

Octopuses are soft-bodied mollusks invertebrates found in oceans around the world [2]. There are more than 300 known species of octopi. The dumbo octopus is one of the shortest-living marine animals and is found around 4000 meters below sea level.

They get their name from the Disney character Dumbo due to their fins that resemble an elephant’s ears.

Like all other octopuses, dumbo octopuses have eight arms. Their expanded arms resemble an umbrella.

Dumbo octopuses can live a short life of around five years.

One of the most famous dog breeds in the world (the Bordeaux mastiff) has a relatively short life. They originated in France and are identified by their large heads and expressive eyes.

Bordeaux mastiffs have a shorter lifespan compared to other dog breeds and usually live for around seven years. With proper care and attention, they can live up to 12 years.

Mosquitofish are found in the Gulf of Mexico and in the adjoining areas of the Mississippi river. They are freshwater fish and are named after their diet.

Mosquito fish feed on mosquitoes and their larvae. They can grow up to 2.8 inches in length and have a lifespan of up to one and a half years.

One of the reasons for their short average lifespan is predators:

Monarch butterflies, also known as the common tigers, milkweeds, and wanderers, are one of the several butterfly species native to North America.

They feed on poisonous milkweeds, which allows them to fend off their predators and vomit them out if they engulf monarch butterflies.

These small butterflies have a short lifespan of around four to five weeks. Some monarch butterflies can live for more than two months, depending on the environment.

The brine shrimp is an aquatic crustacean that is widely used in aquaculture[3]. They feed on yeast, soybean powder, planktonic algae, and egg yolk.

Brine shrimps are a staple food in several cultures due to their high protein content and omega-3 fatty acids.

They have short lifespans of up to six months which varies with water salinity, temperature, and availability of food.

Dragonflies are small flying insects that are actively found buzzing around lakes and ponds.

They live for an average of four months and are prone to predator attacks such as birds, lizards, amphibians, and fish.

Dragonflies are identified by their large eyes, which contain around 20,000 Ocelli cells, large transparent wings, and slender bodies.

Ants are one of the most common insects found in the world. They live in large social groups called colonies and have extremely short lives.

Ants have a queen who is responsible for giving birth to the entire colony. Female workers are responsible for collecting food and caring for the young. The queen lives longer than other ants, as they can live up to several years.

The male drone ants have a single purpose which is to reproduce with the queen. They have a short lifespan of up to three weeks.

One of the most annoying parasites in the world, the bed bug, is found almost everywhere on the planet. They are nocturnal insects that suck blood from humans to feed themselves.

There are numerous side effects of a bed bug bite:

They have a short lifespan of four months, during which time a female bed bug can lay up to 500 eggs.

Fruit flies, also called Drosophila Melanogaster, are a fly species that feed on fruits, vegetables, and other foods.

They live for around 40 to 50 days, depending on the temperature. A female fruit fly can lay up to 500 eggs in its lifetime.

Once the larvae hatch, they feed on the fermenting food to gain energy. Fruit flies are less than one-fifth of an inch long and have transparent wings. They are found in every part of the world where food is found.

Houseflies are one of the most common insects found around the world. They are natural decomposers of the world. Female houseflies are larger than males and can lay around 100 eggs at once.

Houseflies mate once and store the sperm for later use. The larvae hatch to form maggots which feed on decomposing food.

They measure less than half an inch in length and have a lifespan of around two to four weeks.

Within this short lifetime, a female housefly can easily lay up to 1,000 eggs.

Mosquitoes are often considered to be the deadliest animal in the world. They are responsible for more than 750,000 deaths around the globe every year.[4]

The Culex Pipiens, also called the house mosquito, is one of the most common mosquito species in the world.

Mosquitoes are parasites that feed on human blood to nurture their bodies. They also feed on nectar and sugary foods to store fat in their bodies.

Mayflies are aquatic insects found in almost every part of the world. There are over 3000 known species of mayflies. They have long tails and wings that do not fold over their bodies.

Mayflies are also known as fishflies, shadflies, or up-winged flies. They live in water and lay their eggs in lakes and ponds. After hatching, mayfly larvae spend around two years of their life underwater till they can grow their wings.

Once their wings grow, they move out of the water and start finding a mate to reproduce. Adult mayflies only live for around 24 hours. During this time, female mayflies mate and successfully lay their eggs in the water to repeat the cycle.

Mayflies live in clean and unpolluted water, making them an indicator of the freshness of a standing water body.

There are several animals in the world that have short lives. Size is generally one of the most important factors that decide the lifespan of a species. Larger animals live longer compared to some of the smallest ones.

Mayflies, houseflies, and mosquitoes have some of the shortest lifespans. Some aquatic animals, such as the mosquitofish and Dumbo octopuses, live short lives. Small rodents live relatively small lives compared to some of the larger rodents.

The average life expectancy of a species can be increased by taking good care of them and providing them with a healthy environment to live in. Predators significantly reduce the lives of most small species.

What Animal Has the Shortest Lifespan?

The Mayfly has the shortest lifespan in the animal kingdom. Their wings do not fold into their bodies, making them unique among flies.

What Are Some of the Shortest Living Pets?

What Bird Lives the Shortest?

Hummingbirds are some of the shortest-living birds in the world. The Petite ruby-throated hummingbird has an average lifespan of around three to four years.