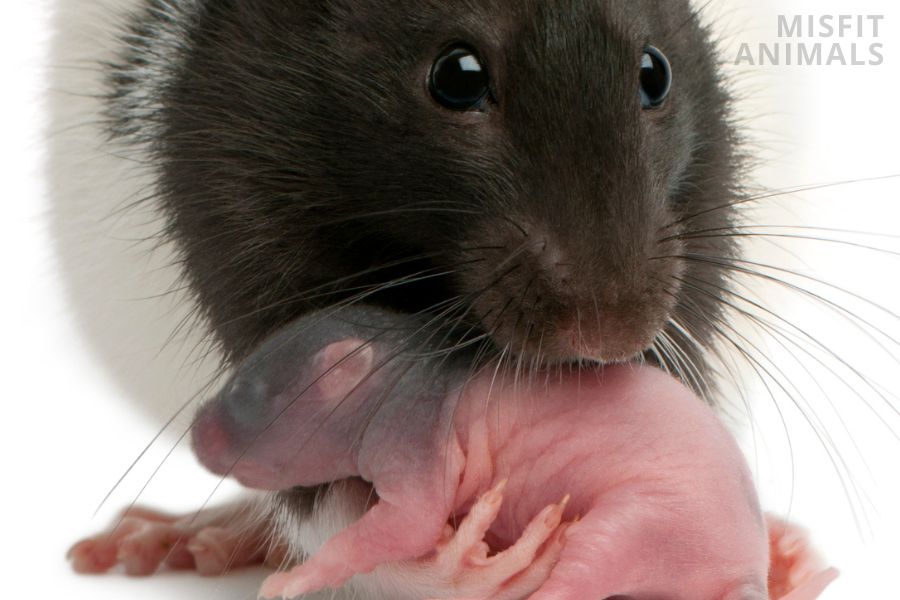 While cannibalism is an unaccepted practice amongst humans, many animals take part in it. Even within the family.

It’s hard to imagine an animal eating its own offspring, but it does happen. Some do it for food, while others do it out of desperation or confusion.

In this article, we’ll uncover some of the most common child-eating animals and why they eat their young.

The practice of eating one’s own young is known as filial cannibalism. While it may seem disturbing to us, it is a fairly common occurrence in the animal kingdom.

Here are some examples of animals that engage in filial cannibalism:

Polar bears are one of the few animals that regularly eat their young[1]. This behavior is most likely due to the harsh conditions in which they live, where food is scarce and competition for resources is high.

While it may seem brutal, eating their young is an act of mercy for the mother bear, who would otherwise watch her cubs starve to death.

Polar bears are found in the Arctic Circle and its surrounding areas, including parts of Canada, Greenland, Norway, Russia, and the United States (Alaska). They are excellent swimmers and can remain submerged for up to two minutes while hunting for food.

The cat is a small, carnivorous mammal of the Felidae family. It has been revered by humans for centuries, and its ability to kill vermin such as rodents and snakes has made it one of the most popular pets in the world.

However, the cat’s hunting instinct often leads it to kill and eat its young. This behavior is common in the animal kingdom, but it is particularly well-documented in cats.

There are several reasons why female cats kill and eat their kittens:

Chimpanzees are members of the family Hominidae and are the closest living relatives to humans. Their diet consists mostly of fruit, but they will also eat leaves, buds, flowers, insects, and small vertebrates.

Young parental chimpanzees have been known to eat their own young[2]. This behavior is thought to be caused by competition and inexperience.

In the wild, chimpanzees are constantly competing for food and resources. If there are more around, there is more competition.

If a chimpanzee does not have enough food to feed her young, she may kill and eat it to prevent it from starving to death. This behavior is also seen in other animals, such as lions and Komodo dragons.

While it is not a common occurrence, it does happen occasionally.

The rat is a common and well-known rodent. They are found in nearly every part of the world and are known to be carriers of disease. Rats are also known to eat their young.

There are many reasons why a rat might eat its young.

Another reason why a rat might eat its young is to prevent them from being eaten by predators. If a mother rat knows that her babies will be killed, she may kill and eat them instead.

The lion is another one of the animals that have been known to eat their young. This behavior is most likely to occur when the mother is unable to find enough food for her cubs, or when the cubs are sick or injured.

While it may seem barbaric, it is a way for the mother to ensure that her cubs have the best chance of survival.

In some cases, the mother eats her cubs if she is unable to protect them from other predators.

While this behavior is most common in lions, it has also been observed in other animals, such as tigers, leopards, and jaguars.

Hamsters are small, furry animals that are native to Europe and Asia. They are widely kept as pets in many parts of the world and are popular for their cute appearance and easy-to-care-for nature.

Hamsters are also known for being able to eat their young.[3]

Many hamsters eat their young if they feel that they are in danger or if they are unable to care for them properly. This is done as a way to ensure the survival of the rest of the litter.

In most cases, hamsters only eat their young if they are sick or injured. There have been some instances where healthy hamsters have been known to eat their young though. This is usually done when the mother is feeling stressed or threatened and feels that she needs to protect her litter.

The tiger is one of several animals that have been known to eat their young. While most animals do this in times of desperation, the tiger seems to do it more often.

There are several reasons for this, including the fact that the tiger is a top predator and has no natural predators itself. This means that it can afford to be more aggressive and take risks, such as eating its own young.

The sand tiger shark is a fierce predator, but it is also one of the animals that eat their young.

Female sand tiger sharks give birth to live young, which are then immediately eaten by the male sharks. This gruesome practice is thought to ensure that the strongest and most aggressive sharks survive to adulthood.

The sand tiger shark is a large, aggressive predator that hunts in shallow coastal waters. It is known for its unique hunting technique: lying in wait at the bottom of the ocean, camouflaged by sand, until its prey swims overhead.

Then, it explodes up from the bottom and grabs its unsuspecting victim with its powerful jaws. Their diet consists primarily of fish, but they do also eat smaller sharks, rays, squid, and crustaceans.

This predator is especially dangerous to humans because it often hunts in areas where people swim and surf. However, there have been no recorded attacks on humans by sand tiger sharks.

The most notable animal on this list is the prairie dog. Prairie dogs are known to eat their young if they are not properly cared for.

In some cases, the mother may simply be too weak to care for her young and she may resort to eating them to survive.

Why Do Animals Eat Their Young

While it’s disturbing, there are reasons why animals eat their young: hunger, stress, or safety. In many cases, it’s a matter of survival.

It’s a disturbing behavior that we humans can’t comprehend: why would any parent want to harm their child? And yet, it happens in the animal kingdom all the time.

The most common reason is simply that they’re hungry. In many cases, animals will only eat their young if there is a food shortage and they’re desperate for sustenance. This is often seen in the wild, where parents may abandon or even kill their offspring if they don’t think they can provide enough food for them.

Some animals eat their own eggs (before they hatch) to prevent them from being eaten by predators.

By consuming their weak younglings, parents can also protect their other offspring from being preyed upon.

This behavior is often seen in reptiles and fish, who are especially vulnerable to predators.

In some cases, animals may eat their young because they’re sick or injured. If an offspring is sick or injured, it may hinder the safety of the rest of the family.

Finally, some animals may eat their young simply because they’re stressed. This is often seen in captivity, where animals become frustrated or anxious due to their lack of freedom and space.

Do Giraffes Eat Their Babies?

No, giraffes do not eat their babies. They are protective of their young and fight off predators to keep them safe. There have been isolated incidents of giraffes killing and eating they’re own young, but this is rare and usually only happens when the mother is sick or starving.

Do Wolves Eat Their Young?

The answer to this question is both yes and no. In the wild, sick or weak wolf pups may be killed and eaten by their pack members. This occurs if the pack is low on food, or if the pups are seen as a threat to the survival of the pack. In captivity, wolves do not typically eat their young as they have plenty of food.

Do Coyotes Eat Their Young?

While it is not common, there have been reports of coyotes killing and eating their young. This behavior is most likely to occur when the coyote is starving or if the young are sick or injured.