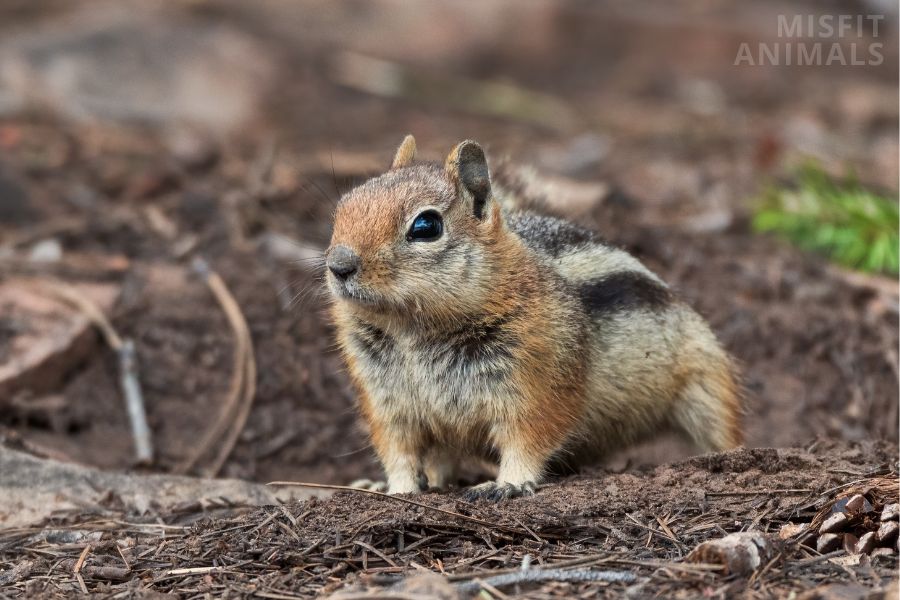 Whether you’re an animal lover or not, chances are you’ve come across at least one backyard creature that loves to dig holes.

From moles and chipmunks to gophers and skunks, these animals can be frustrating to deal with when they start causing damage to your property.

If you’re wondering what kinds of animals are most likely to dig up your yard, read on for 10 of the most common offenders!

What Are the Animals That Dig Holes in Yards?

There are many animals that can be responsible for digging holes in yards. Some of the most common animals include snakes, groundhogs, moles, voles, and gophers. Each of these animals has its own reasons for why they dig holes.

Here are the most common animals that dig holes in yards and gardens:

Skunks are among the most common animals that dig holes in yards. They are attracted to grubs, which are the larval stage of certain beetles. Skunks dig for these grubs using their powerful front claws[1].

The holes they leave behind are usually about two inches in diameter and six inches deep.

While skunks generally cause no harm, their holes can be a nuisance.

If you have skunks digging holes in your yard, there are a few things you can do to deter them:

Moles are small, burrowing mammals that have long, cylindrical bodies and short legs. They are black or brown in color and have very small eyes and ears.

Moles dig shallow tunnels underground in search of food, such as insects, grubs, and earthworms[2]. While moles are a nuisance, they are not dangerous to humans. They are often beneficial to gardens and lawns as they aerate the soil and eat pests.

Similar animals to moles, that dig holes in yards, include rabbits, voles, skunks, and groundhogs. These animals typically dig burrows for shelter or to store food. While they can cause damage to gardens and lawns, they are generally not considered a nuisance like moles.

Groundhogs are one of the common animals that dig holes in yards. They are also known as woodchucks and whistle-pigs. Groundhogs are rodents and belong to the squirrel family.

These animals are usually brown or black in color and have short tails. Groundhogs are found in North America and Canada. They dig burrows in the ground where they live.

Groundhogs are mostly active during the daytime and eat grass, nuts, fruits, and vegetables.

Pocket gophers are small burrowing rodents. They are common in many parts of North America. They get their name from their large, furry “pockets” which they use to carry food.

Gophers are known for digging extensive tunnel systems underground, which can cause problems for homeowners.[3]

Some of the most common signs that you have a pocket gopher on your property include:

If you suspect that you have a pocket gopher problem, the best course of action is to contact a pest control professional. They will be able to identify the problem and come up with a solution to get rid of the pests.

Voles, also known as field mice, are small rodents that spend most of their time in underground burrows. They are common in yards and gardens and cause a lot of damage by digging holes and eating plants.

There are several ways to tell if you have voles in your yard. The first is by the presence of small holes, about an inch in diameter, that lead to underground burrows.

You can also see raised dirt mounds around these holes, as well as trails of small footprints in the snow. Voles are known to eat plants, so you can notice damage to your flowers, vegetables, or lawn.

While most people don’t know this, wasps dig holes in the ground. They are small, stingless insects that are attracted to sweet smells. Their nesting habits can be a nuisance, as they often build their nests in places where people congregate, such as patios and decks.

While wasps don’t typically cause damage to your property, their stings are painful. If you have wasps in your yard, there are a few things you can do to get rid of them.

One way to get rid of wasps is to keep your yard clean and free of food scraps. Wasps are attracted to sweet smells, so they will be drawn to your yard if you have any food or garbage lying around.

Clean up any spills or crumbs immediately, and keep your trash cans tightly sealed.

You can also try setting out traps for the wasps.

Raccoons are not only trash-stealing creatures but also ground-digging animals. They are attracted to areas with food, water, and shelter, and often excavate large holes in search of these needs.

Raccoons can cause significant damage to lawns and gardens and are a nuisance to homeowners.

If you have a raccoon problem on your property, there are a few things you can do to deter them:

Earthworms are beneficial yard-digging animals. While commonly thought of as pests, they benefit yards and gardens as they aerate the soil as they burrow through it. This helps roots grow more easily. They also help improve drainage and water retention in the soil.

While earthworms are generally beneficial, their burrowing can sometimes be a nuisance. Their holes can damage lawns and make it difficult to walk or drive on them.

There are different ways to get rid of worms, including using bait, traps, or chemicals.

If you have a garden, you can also try to attract earthworms by adding organic matter, such as compost, to the soil. This will give them something to eat and help them thrive.

If you want to attract worms, make sure to keep your garden well-watered, as earthworms need moisture to survive.

Snakes are one of the rare animals that can be found digging holes in people’s yards. While some snakes are harmless, others can pose a serious threat to both humans and pets.

It is important to be able to identify the different types of snakes that may be present in your area so that you can take appropriate precautions.

There are two main types of snakes that are commonly found digging holes in yards:

Garter snakes are harmless to humans and can be beneficial since they eat rodents like mice and rats.

Rattlesnakes, on the other hand, are dangerous. They can cause serious injury or even death if they bite you.

If you see a snake in your yard, it is best to leave it alone and call animal control if you are unsure of what type it is.

Chipmunks are small, striped rodents that are common in North America. They are well known for their love of burrowing and often create extensive tunnel systems underground. This can lead to damage to lawns and gardens, as the animals uproot plants and disrupt root systems.

Although they are a nuisance to many homeowners, chipmunks are generally harmless creatures.

There are several species of chipmunks found in the United States, but the most common is the Eastern chipmunk (Tamias striatus). This animal is small, with reddish-brown fur and black stripes running down their backs. They have large cheeks that they use to store food, and their tails are long and fluffy.

Chipmunks are very active animals and are often seen running around in search of food.

What Animals Digs Holes in Yards at Night?

Chipmunks are the most common animal that digs holes in yards at night. These small, striped rodents are active and love to burrow, which can lead to damage to lawns and gardens. Although they are a nuisance, chipmunks are harmless.

What Rodent That Digs Holes in Yard?

There are many different types of rodents that live found in yards. Each one has its own unique set of behaviors. One type of rodent that is known for digging holes in yards is the groundhog. Groundhogs are large rodents that can grow to be up to two feet long. They have brown fur and a heavy body.