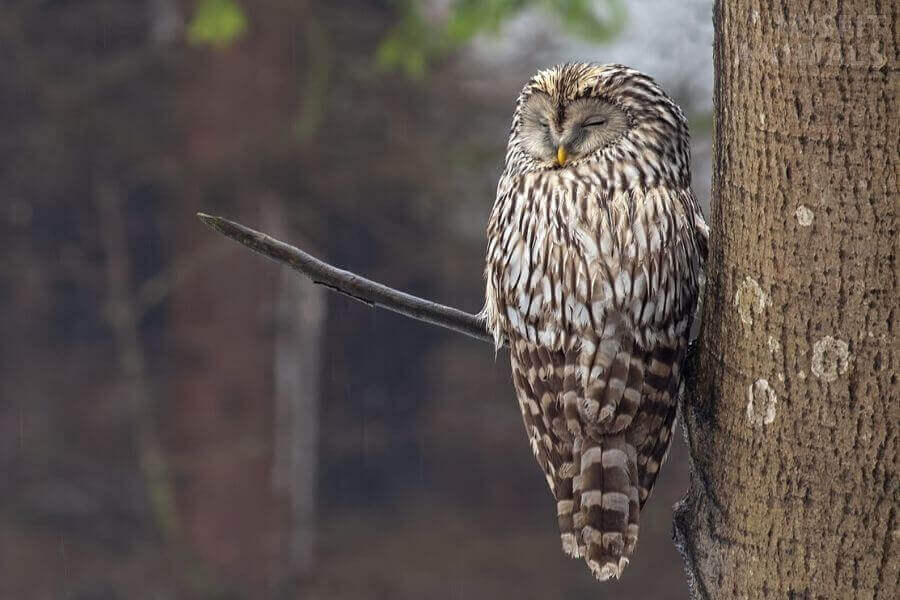 In general, owls sleep during the day. There are a few select diurnal owls that sleep at night, but the vast majority of species will rest in the daytime.

Do owls sleep during the day? This is a question that many people have asked, and there is no definitive answer.

Owls are known for being nocturnal animals, so it would make sense that they would sleep during the day. However, some owls have been known to be active during the daytime.

So what is the answer? Let’s take a closer look at owl sleep patterns and find out what we can learn about these fascinating creatures.

Do Owls Sleep During the Day?

Yes, most owls do sleep during the day. Owls are nocturnal birds, which means they are active during the night. When the sun is out they rest, nap, and sleep.

Owls are nocturnal birds of prey, meaning they hunt at night[1]. To rest, these birds will sleep during the day in tree cavities or in nests made by other animals. Their eyes are closed, but their ears remain alert for predators.

Where Do Owls Sleep?

Owls sleep where they feel safe and where it will be easy to catch prey when hunting at night. The exact place where an owl sleeps depends on where the bird lives as well as how many other owls are in that area.[2]

Why Do Owls Sleep During the Day?

By sleeping during the day they can avoid predators while simultaneously resting and storing up enough energy for their nocturnal activities.

Owls also use this time to take a break from hunting. Hunting is very strenuous on an owl’s wings and stamina. WIthout breaks, they would collapse.

How Do Owls Sleep?

Owls sleep with their eyes closed in quiet, undisturbed places, mostly in tree cavities or cliff edges. They sit on branches or nest to nest boxes, but not in nests.

Do Owls Sleep Lying Down?

Adult owls sleep upright, with their heads tilted back and beaks pointing up. Their feet become tightly closed as they sleep so that they don’t tall.

Baby owls sleep lying down, just like humans. They typically sleep on their stomach. While it’s unknown why they do this, some claim it to be a matter of lack of strength. They simply can’t keep their heads up. Fledglings also experience higher levels of REM sleep.[3]

Do Owls Sleep With Their Eyes Closed?

Owls sleep with their eyes closed. They have three different sets of eyelids each with its own functions. One eyelid is for cleaning, the other is for blinking, and the third one is for sleeping.

The third eyelid is the nictitating membrane. The inner surface of this membrane also contains a gland that produces oils to keep the eye moist and clean.

Do All Owls Sleep During the Day?

Most owls are nocturnal animals, which means that they sleep during the day and hunt at night. There are some species of owl that do not fit into this category.

The northern hawk-owl and the northern pygmy owl are both diurnal, which means that they hunt during the daytime as well as during the night while all other owls are resting.

Snowy owls and select other species can occasionally come out during the day, but it’s uncommon for them to do so. This is often a matter of food availability.

What Do Owls Do During the Day?

Owls are birds of prey and hunt at night. When the sun rises, After a long night of hunting, they take a break from their nocturnal activities.

Having used up all their energy, owls typically do one thing during the day: rest. They return to their nesting site, also called a roost, and may do this alone or with other owls, depending on the species.

Where Do Owls Stay During the Day?

Many owls stay in trees or abandoned buildings during the day to avoid predators, people, and other disturbances.[4]

Tree branches are one of the best places to sleep because they are safe from ground-dwelling predators like snakes, coyotes, and foxes. Owls can also safely keep an eye out for their favorite prey (rodents) below the tree branches.

Owls hide inside small, dark spaces like hollow trees and old barns where their prey is most plentiful. Barn owls may even choose to live in abandoned buildings because it keeps them hidden from predators and gives them an excellent view of the surrounding grasslands and fields.

Do Owls Hunt at Night?

With incredible adaptations, such as their superior eyesight and hearing, owls are impressive nighttime hunters. They’re skilled at locating and catching prey, whether it is day or night.

Throughout many years, owls have developed several adaptations that allow them to hunt more effectively in the dark. As mentioned, this includes their eyes and ears, but also their wings, as they’ve learned to fly completely silently, further allowing them to stay hidden in the darkness.

Owls also have an inner ear that can rotate to allow for directional hearing. This means they can pinpoint the exact location of their prey in total darkness.

Their flexible necks allow them to better locate their prey. They can rotate their necks 270 degrees, allowing them to turn their head backward while keeping a stable, comfortable perch. In this way, owls can look behind them without letting go of their prey.[5]

These are a few ways owls hunt at night:

Can Owls See at Night?

Owls have excellent nighttime vision, the best among all animals. Their eyes have a large portion of rod cells in their eyes, the cells responsible for detecting light in dim-light settings. They also have a natural adaptation called the tapetum lucidum.

An owl’s eyes are surrounded by a disc of feathers to keep out stray light, and the top half of an owl’s face is covered in a thin, translucent film that helps protect their highly sensitive night vision.

The tapetum lucidum, a reflective layer in their eyes, acts as a light enhancer. This layer reflects light back through their eyes, allowing their retina to register more light.

During the nighttime, they can see up to 100 yards away. Its hearing is four times more acute than its sight, and they use this tremendous sense of hearing to locate prey and avoid predators.

Owls have the ability to see during low light conditions, which is called scotopic vision. Scotopic means “night” in Greek.

Owls are typically known as nocturnal creatures, awake at night and sleeping during the day. This sleeping pattern is likely because more prey is easily available at night, which has caused owls to adapt.

Not all owls are nocturnal, as a few species are diurnal. Some species are crepuscular, meaning they’re most active during the twilight hours.

Can owls be awake during the day?

Yes, owls can be awake during the day. They don’t sleep through the entire day. There are also diurnal owl species. These sleep at night and hunt during the day, the opposite of most owls.

How long do owls sleep during the day?

The average owl sleeps for about 12 hours a day. This differs depending on the species and the circumstances.