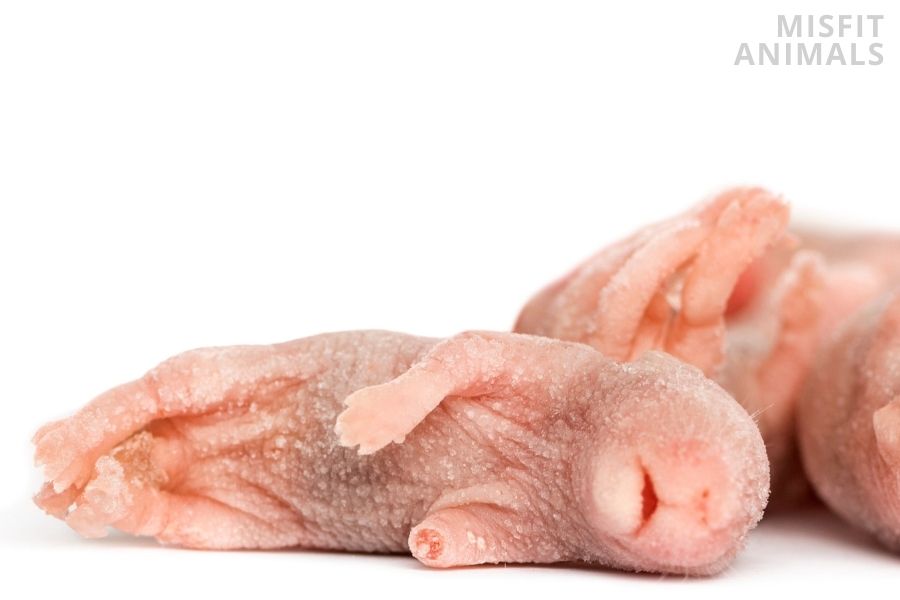 Baby mole rats are born in litters of 3-28 individuals. They are known as pups, and generally weigh 0.07 ounces (2 grams). They are helpless and need extensive care from the caretakers of the colony.

If there is one thing that looks stranger than a naked mole-rat, it’s a naked mole rat baby. These tiny creatures, born in abundance, grow to be cooperative members of their mammalian colony.

Read on to learn more about the offspring of naked mole-rats, including their diet, development, and risks.

What Are Baby Naked Mole-Rats Called?

Baby naked mole-rats are called pups. Associated with the young of several species, the term ‘pup’ is mainly for mammal species. Some marine vertebrates have young referred to as pups also.

Naked mole-rat pups are born a deep pink color with tight, thin skin. They are born with closed eyes that can be hard to identify. Small ear holes on either side of the head are not yet defined.

Newborn naked mole-rats are compared to jellybeans in appearance. They are tiny, pink, and are physically developed with all appendages and external organs.

At birth, their eyes remain closed. The skin over the optical cavity is so translucent that it is almost indistinguishable. Ear openings are visible but lack defining loose skin.

The pups’ skin is a deep, solid pink. It is tight across their body, differing from adults’ characteristic loose and “wrinkly” skin, which reduces friction in tight burrows.

How Much Do Baby Naked Mole-Rats Weigh?

Baby naked mole-rats are born at around 2 grams or 0.07 ounces.

What Do Naked Mole-Rat Babies Eat?

The diet of a baby naked mole-rat includes:

While this strange species may not follow many classic mammal behaviors, they still have the defining characteristics. As mammals, the reproducing female lactates breastmilk after birth which is the pup’s primary food source.

As a general rule, mammals don’t have more offspring than they do mammaries. The naked mole-rat queen only has 12 mammae for feeding young but can often produce litters larger than this amount. Sharing behavior is observed in large litters so that all young get equal sustenance.[1]

Pups use their sense of smell to locate their mother within the communal chamber. If they wander out of her vicinity, caretaker mole-rats return them to her.

These babysitting naked mole-rats also groom the pups and encourage their weaning. The caretakers consume the Queen’s feces to receive maternal hormones, which stimulate rearing behaviors.[2]

The babies themselves also consume the Queen’s feces in the 24 hours after birth to absorb hormones crucial to their development.

Feces of other colony members are also part of their diet as a source of fiber and beneficial bacteria to promote healthy digestion. Pups exhibit begging behaviors for feces, such as tugging at the skin around an older colony member’s back end.

Baby naked mole-rats are born able to walk and move immediately. Their eyes remain closed and they rely on breast milk for at least two weeks. They then develop quickly – open their eyes, become mobile, and wean from their mother. After eight weeks they start to receive roles within the colony.

When Do Naked Mole-Rat Pups Wean?

Baby naked mole-rats feed exclusively on breast milk and feces for at least the first week. They show interest in solid foods from two weeks and begin to consume large amounts of solids between 2–8 weeks. They are weaned fully at 8 weeks.

How Long Do Naked Mole-Rat Babies Stay With Their Parents?

Once they have weaned from their mother, they no longer need her care nor that of caregiver mole-rats. Young stay in the same colony with their mother, the Queen, and assume a working role.

General workers often live in the same colony as their parents for their entire life.

Disperser morph individuals leave the colony once they are adults, usually after two years.

What Time of The Year Are Baby Naked Mole-Rats Born?

Naked mole-rats do not have a set breeding season. The reproduction occurs in times of good availability of food to support breeding and rearing. In the wild, this time varies based on local food supplies. In captivity, naked mole-rats can breed continuously.

Baby naked mole-rats are born when their colony can sustain them. This lack of a set breeding system allows for flexible breeding throughout the year to ensure the survival of the younglings.

Colonies have litters at varying times, depending on what food source is local to them. In the dry season of East Africa, from June to September, plants increase in underground storage, the main diet of the naked mole-rat. This time of year offers more food and more breeding.

In captive settings, naked mole-rats can continue to breed with a steady food supply. It’s not uncommon for a Queen to give birth to a new litter every 80 days.[4]

Naked mole-rat pups are born defenseless. Underground predators, such as snakes, can take them. Past litters can get jealous of newborns and remove them from their mother. They also risk getting lost and kidnapped by unfamiliar colonies.

Naked mole-rat pups are at risk of

Baby naked mole-rats spend the first few weeks of their life within the communal resting chamber of the colony. While they are at risk of being predated on by snakes, this position generally keeps them safe from predation as many other colony members surround them.

On the occasion that a new litter is born immediately after weaning a previous litter, there is the possibility that recently weaned juveniles become jealous of the newborns. They may abuse their new caretaker-positions and purposely move the young away from their mother rather than keep them close.

Young naked mole-rats do not have expert navigation of the colonies’ tunnel systems. While they follow scent trails to find their way around, they risk getting lost and positioned far away from the others.

If they are away too long, they lose the communal scent of the colony. They can be mistaken for a stranger on reentry, potentially facing aggression. Studies show that rolling young mole-rats in unfamiliar scents cause them to be rejected from their home colony. [5]

Members from neighboring colonies sometimes snatch away young to raise them as their own. This tactic increases their workforce without using large amounts of energy on reproduction.

Naked mole-rat babies are tiny but mighty. Born only the size of a jellybean, eight weeks old they develop into fully functional colony members. Their road to adulthood is not always easy, with plenty of risks both outside and within their home.