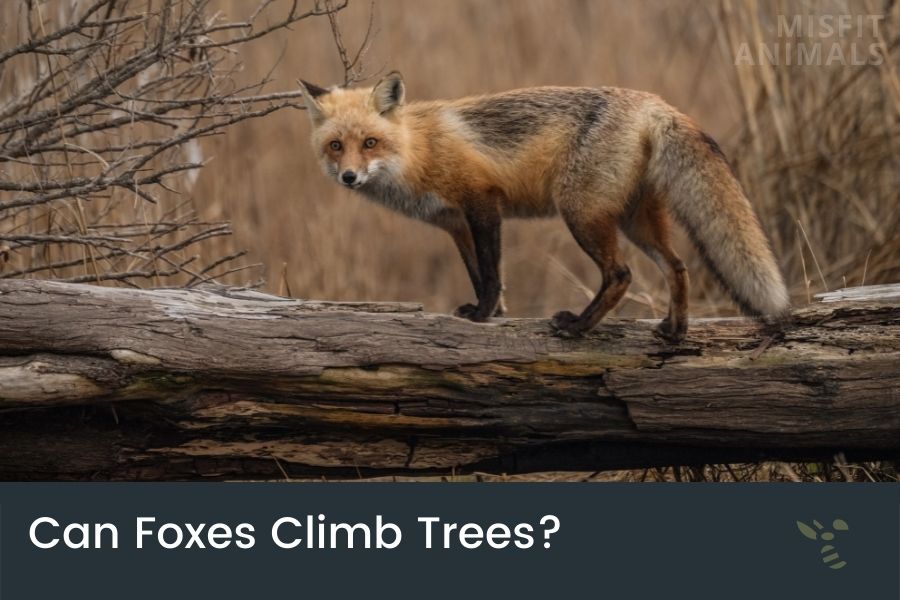 Foxes are great climbers, and can easily climb trees. They often do this to get to prey, avoid predators, or get to a quiet place where they can rest.

Foxes have a number of tools they use for climbing: claws, strong legs, and flexible ankles.

They’re predators, always looking for a meal. If they spot a bird’s nest, or other prey, in a tree, they may climb up there for a small feast.

In this article, we’ll talk more about how foxes climb, their ability to do so, as well as why they may climb into a tree.

Foxes are great climbers. They have sharp claws, which allow them to grip onto the bark of the tree or fence without slipping off. Foxes also use their tails as a counterweight when climbing up.

By doing this, foxes can easily climb up into tall trees. Foxes may also climb over your fence if they smell something they can eat in your garden.

Yes, foxes can climb trees. They can use their claws to dig into the bark and pull themselves up the trunk. Foxes can also jump quite high with their strong legs, making it easy to jump into trees or jump between branches.

They may do so if they see anything they can eat, or if they’re running from predators.

Trees provide good shelter for foxes, who want a quiet place to stay.

Foxes can climb fences. They use a combination of great jumping height, along with great climbing skills, to get over any obstacles in their way.

It’s believed that foxes can jump anywhere from 6 to 9 feet into the air. When climbing fences, they can scale another 3-4 feet, making it very difficult to keep foxes out of your garden.

Foxes can also dig under a fence if it doesn’t stick too far into the ground.

In urban areas, it’s not uncommon for foxes to invade gardens. They do this if there’s anything that attracts them, such as:

Yes, foxes will invade your garden, if they can find something to play with. They’re very playful animals.

Related: How High Can a Fox Jump & Can They Climb Fences?

Why Do Foxes Climb Trees?

Foxes can climb trees because they are hunting for prey, trying to escape from predators, or because they’re looking for shelter.

This is an important survival skill of foxes, as it helps them chase down prey, even if it tries to escape into a tree.

In Australia, foxes have been observed to climb trees as they were apparently looking for baby koalas that they could snatch away. [1]

How Do Foxes Climb?

When foxes reach about six months old, after being born in springtime, they begin practicing their climbing skills.

Though young foxes can climb trees, this is a skill that they hone as they age, and as they get stronger.

When climbing, they use a combination of the following:

Foxes can climb almost anything thanks to their retractable claws. Their sharp, curved claws are perfect for climbing up trees and fences. They’re also very useful for digging.

Retractable claws let foxes easily extend their claws when needed, as well as pull them in when they need to let go.

This mechanism works due to tendons that allow them to draw in or extend out each claw when necessary.

Foxes have both strong forelegs and hind legs, relative to their size. With these, they’re able to jump quite high, giving them an initial boost when having to climb into tall trees.

With their jumping ability, they can also jump from branch to branch, making it easier to reach higher branches or prey hiding in the top of a tree.

Foxes’ ankles can rotate a complete one hundred and eighty degrees. They use this ability to scale both vertical surfaces as well as sheer cliff faces.

This allows them to get a better foothold when climbing, as well as making it less likely for them to fall.

4. Using Their Tail for Balance

When foxes climb, they use their tail for balance. This is also seen in other animals, such as wolves, cats, and squirrels.

By using their tail for better balance, they’re able to move quickly through trees, without having to worry much about falling.

Related: Why Do Foxes Have Tails?

Will a Fox Climb Through a Window?

While foxes do tend to avoid humans, they’re still curious animals. If they spot an open window, and if they can smell food, they will invade your home.

It’s not unheard of that foxes have jumped in through windows.

Can Foxes Climb on Your Roof?

While getting onto a roof is much more difficult than simply scaling a tree, foxes can sometimes venture onto a rooftop. They often do this with the help of trees, or other tall objects, which they’ll use to jump from.

Sometimes, a bird will have nested on your roof, or other animals, like squirrels, will venture up there. This can attract foxes to your roof as well.

Foxes are, generally, not dangerous to humans. As stated earlier, they tend to avoid human contact as much as possible.

In a few instances, they will be dangerous. This is if they’re rabid, as rabies can be fatal to humans. If you see a fox exhibiting off behavior, such as not being repelled by loud noises, or if they’re particularly aggressive, you should be careful.

Take a step back, call animal control, and let them handle the fox.

What to Do if a Fox Comes up to You

If a fox comes up to you, remain calm. If you’re suspecting that it might be rabid, don’t agitate it, as it could attack you.

Stay silent, and move out of the way. It’s important to give the fox an escape route. There’s a good chance that the fox is looking to escape, so don’t block any doorways, that it intends to use to get out of the situation.

How Do You Avoid Foxes Climbing Your Fence?

These are a few ways to avoid foxes from climbing your fence. First, make sure your fence is at least 6 feet tall. This way, foxes can’t just jump over it but will have to make an effort.

Another way to prevent foxes from climbing your fence is to remove any attractants.

Don’t leave any food outside as this can attract prey and other animals such as raccoons. This can then draw the attention of nearby foxes who will attempt to climb into your yard for an easy meal.

Also don’t leave out water, toys (or other small items), as these can attract foxes as well.

Foxes can climb trees, as they’re excellent climbers. They often do this to hunt prey, or to get away from predators. They climb using their claws, strong legs, and flexible ankles.

Foxes have also been known to climb in through windows, or even onto the roof of houses. If this is the case, you can call animal control to remove the fox.

There’s usually no reason to worry if you’re facing a fox. They typically aren’t dangerous to humans, unless they’re rabid.

Yes, red foxes can climb trees. Red foxes are the biggest of all foxes, meaning they can also jump the highest, and climb the fastest. They climb into trees for prey, or for shelter.

Yes, red foxes can climb fences. Where other fox species can only jump and climb a total of 6 feet, red foxes have been known to climb as high as 9 feet, easily getting over most fences. If you want to avoid this, remove any attractants from your garden, and add extra elements to your fence (such as an overhang).