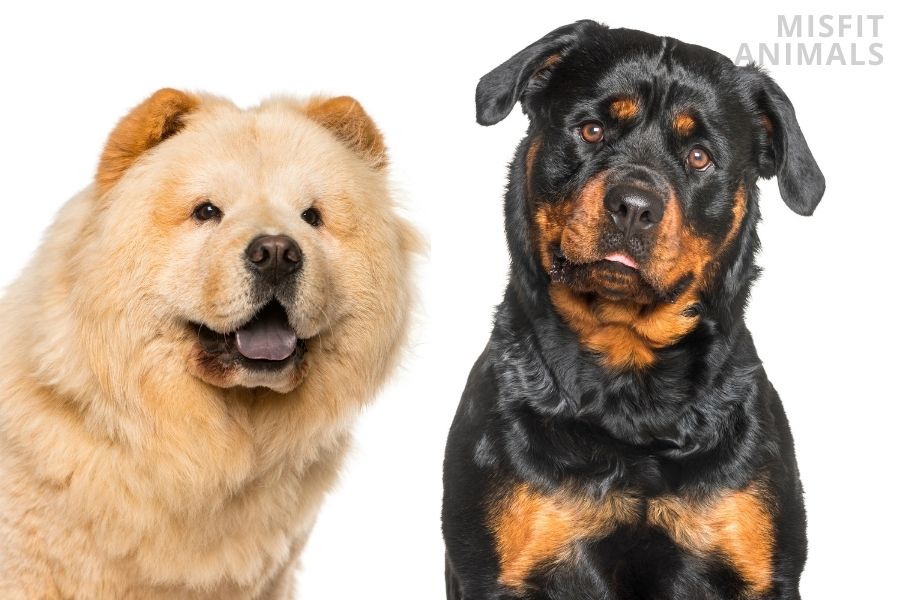 Rottweiler Chow mix is an adorable family dog, a cross between a Rottweiler and a Chow Chow. It is a medium-sized dog that is energetic, loving, and protective.

The demand for hybrid dog breeds has risen dramatically in the past few years.

Professional breeders have started experimenting with various types of dogs to make crossbreeds that have better traits than their parents. These dogs are designed keeping in mind the various required traits present in their parent breeds to create a superior dog.

One such breed is the Rottweiler Chow mix. This article explains a crossbreed of a Rottweiler and a Chow Chow, both excellent guard dogs, which can be the perfect family dog for you.

The Rottweiler Chow mix is a hybrid breed that makes for a perfect family dog. It is an alternative to any purebred and makes for a great guard dog.

A Rottweiler and a Chow Chow are two very different dogs, yet they share some similar characteristics. They are both excellent guard dogs that were previously used as herding dogs.

The cross between the two of them, the Rottweiler Chow mix, inherits the individual traits of its parent breeds making it a great guard dog.

3 Reasons to Get a Rottweiler Chow Mix

The Rottweiler Chow mix is a smart and protective family dog that loves social interactions and playing in the yard. It is a great dog to have in a young family and does well with small children.

Rottweiler Chow mix is a brave and loyal dog. It forms strong bonds with the family members and its natural guarding instincts help fend off unwelcome strangers.

Here are three reasons to get a Rottweiler Chow mix.

1. Intelligent and Easy to Train

The Rottweiler is an incredibly smart dog. It has been used as a service and herding dog throughout history.

The Chow Chow is also an intelligent dog but is rather stubborn to train which is the reason they are considered less intelligent than other guard dogs.

Make sure to keep the sessions short as it has a fairly low attention span.

Both Rottweilers and Chow Chows are famous for being protective guard dogs. They have been used throughout history to herd livestock and to guard their owners.

Having a Rottweiler Chow mix in your house will ensure no strangers enter the premises. Its large size would drive away from the intruder before it even starts barking.

The Rottweiler Chow mix is a family-friendly dog if trained well. Its Rottweiler heritage makes it have a close bond with its owner and the Chow Chow part of it ensures loyalty.

The Rottweiler Chow mix is also great around children but must be trained from an early age to socialize with people as it has a high prey drive which can make it aggressive.

3 Reasons Not to Get a Rottweiler Chow Mix

The Rottweiler Chow mix can be aggressive towards strangers and other pets which makes it a dangerous dog. It also requires a lot of grooming thanks to its medium double coat.

One of the biggest concerns of dog owners is the issue of shedding and grooming. If you are considering buying a dog for yourself, you might have a few questions in mind.

Do they shed a lot? How many times do I have to brush their coat?

The Rottweiler Chow mix sheds seasonally. It usually has a medium double coat which requires a lot of grooming to keep it untangled and smooth.

If this is something you are hoping to avoid, a Rottweiler Chow mix is not a good choice.

It is wary of strangers which can be dangerous if you have visitors coming over. The Rottweiler Chow mix can be trained to be comfortable around strangers, but it must be done during the years of puppyhood.

The Rottweiler Chow mix has a highly strong prey drive which is why it is not good around other dogs, especially smaller ones. Early socializing is key to make it easier around other animals.

Early socialization helps dogs become comfortable around others and helps reduce their prey drive which makes them more open and affectionate.

The Rottweiler Chow mix is the result of a cross between a Chow Chow and a Rottweiler. This dog is being developed in various breeding units across the United States.

The Chow Chow was first developed in China more than 2,000 years ago. It is one of the oldest dog breeds in the world[1]. Chow Chows gained popularity thanks to Queen Victoria who had one as a pet.

These dogs were traditionally used as herding dogs to protect livestock due to their protective instincts. Today, they are generally used as companion dogs and guard dogs.

The Rottweiler is one of the most famous dog breeds in the world. They were originally used by the Roman legions to protect their herds and to serve as guard dogs.

Today, they are used as police dogs, military dogs, and even companion dogs. They are loyal and protective of their family members which make them great guard dog.

The Rottweiler Chow mix is a cross between two guard dog breeds which make it an excellent guard dog. It is being developed by professional crossbreeders across the United States and is slowly becoming a popular choice among families.

The Rottweiler Chow mix is a medium-sized dog that usually has a tan or black coat inherited from its Rottweiler parent. It has small erect ears and long tails which are the traits passed down by the Chow Chow.

Rottweilers are medium-sized guard dogs that have a short double coat. Chow Chows are a little smaller than Rottweilers and have a long double coat which gives them a bulky look.

Each mix inherits different traits from its parent breeds. Some are closer to Rottweilers in appearance while others are closer to Chow Chows.

The Rottweiler is a medium-height dog while the Chow Chow is slightly smaller than it. A cross between the two of them results in a pup that can either grow up to the size of a Rottweiler, a Chow Chow, or somewhere in between.

The average height of a Rottweiler Chow mix ranges between 23 – 25 inches.

Chow Chows are lighter than their Rottweiler counterparts. A typical Chow Chow weighs around 50-70 lbs. A Rottweiler can grow up to be as heavy as 125 lbs.

The average weight of a Rottweiler Chow mix ranges between 80-120 lbs.

Their weight can exceed beyond this range if an improper and unregulated diet is given. You should always pay close attention to your dog’s health, so they don’t develop any diseases from their excessive weight.

The Rottweiler Chow mix can be difficult to deal with if not properly socialized. Rottweilers and Chow Chows are both aggressive and independent. A crossbreed of the two must be trained to behave calmly and gently.

The Rottweiler is famous around the world for its aggressiveness and temper. It is the perfect guard dog and is quite territorial.

The Chow Chow shares this trait with the Rottweiler. It is also protective of its owners and is unwelcoming towards strangers regardless of whether they are friends or foes.

Being herding dogs, they have highly developed guarding instincts. A Rottweiler Chow mix inherits these character traits from both its parents and is also protective of its own.

Early socializing exercises can help Rottweiler Chow mix pups become less aggressive towards strangers and other animals and turn it into a loving and affectionate family dog.

The Rottweiler Chow mix sheds its coat seasonally. It requires frequent grooming sessions to keep its coat untangled and smooth.

Shedding is a concern for the majority of dog owners. Does the dog shed a lot? Do I have to brush the coat daily? Do they require frequent grooming sessions?

The Chow Chow has a long double coat that sheds all year round. This can be quite messy and dangerous for people who are allergic.

The Rottweiler has a short double coat that sheds seasonally but doesn’t require much grooming and brushing.

A Rottweiler Chow mix sheds seasonally but does require frequent grooming to keep its coat smooth and soft. Make sure to prepare yourself to vacuum hair during the summer and winter seasons.

The Rottweiler Chow mix can inherit common diseases of its parent breeds. Several health problems such as Elbow or Hip Dysplasia, Cancer, Gastric Torsion, and others can be inherited from either parent which can cause severe issues in the pup.

A mix-breed can develop diseases that affect its parent breeds. Chow Chows and Rottweilers are prone to some dangerous health issues that they can pass down to their offspring.

The Rottweiler Chow mix can develop some of these genetic health issues which can affect their lives.

It is important to choose a reputable breeder, so you get the healthiest pup for yourself. Rottweiler Chow Mix: Training

Rottweiler Chow Mix is easy to train if their training starts from an early age. They can be quite unfriendly and disinterested in case of improper training and lack of attention.

The Chow Chow is an unfriendly guard dog that values its independence. It is protective of its owners and will guard them. It can also wander off due to its instincts being a herding dog.

Finally, their offspring inherits these traits from their parents.

It is important to start training during the years of puppyhood to make them comfortable with socializing. This helps them become less aggressive and more welcoming towards visitors.

Despite their large size, Rottweiler Chow mixes are sensitive. Yelling at them or punishing them will not aid in your quest to train them. Instead, focus on positive reinforcement to keep them interested.

They have a good attention span and are very intelligent dogs which helps them learn tricks and commands quickly.

Giving a small treat to your Rottweiler Chow mix when they complete a session goes a long way. It could be anything, a walk, playtime in the yard, or even their favorite snack.

Rottweiler Chow Mix is a great family dog. It is loving, affectionate, and energetic. Its huge size also makes it an excellent guard dog to fend off unwelcome visitors.

Some other rottweiler breeds similar to the Rottweiler Chow mix are:

Yes, Rottweiler Chow Mix are great family dogs. They love socializing with their owners and are great guard dogs. They are easy to have around small children which makes them an ideal choice for young families.

No, unfortunately, the Rottweiler Chow Mix is not a hypoallergenic dog. They have a double coat which sheds a lot. This can cause allergic reactions in some people which can be serious.