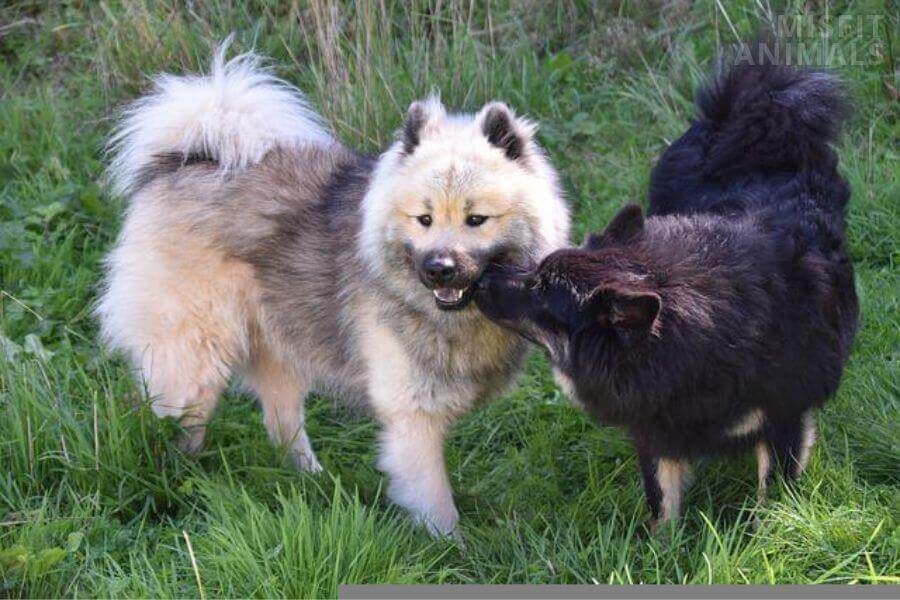 To stop a male dog from whining when a female dog is in heat, create distance between the dogs, take your dog’s mind off the bitch, and tire him with mental and physical exercise. You can also consider getting him neutered.

What can you do to stop him from whining?

In this article, we look at why unneutered male dogs whine when a bitch is in heat. You will also learn how long a bitch’s heat lasts, and what you can do to stop your dog from whining.

Why Is My Unneutered Male Dog Whining?

In other words, your little six-month-old puppy is entering the teenage phase.

If your male can smell a female in heat, he can become obsessed with trying to find her.

Here are signs that your male dog is obsessing about a bitch in heat:

How Long Do Male Dogs Whine When a Female Is in Heat?

An intact male dog is fertile all year round from the age of sexual maturity. A female dog or bitch is only fertile twice a year while in heat. Male dogs whine for as long as the bitch’s heat cycle lasts. This is between 18 and 21 days.

The Three Stages of Heat

An intact bitch goes in heat twice a year. Heat consists of three stages – proestrus, estrus, and diestrus. Depending on the stage, the behavior of males and females changes.

During the first two stages, male dogs are attracted to the bitch, but she will only accept advances during her most fertile stage.

The first stage is proestrus and it lasts for about nine days. During this stage, the bitch’s vulva swells slightly and a bloody discharge starts.

Females in this stage attract males. Males will whine and circle a female, but she is not ready to breed and will refuse advances.

The next phase, estrus, is the most fertile breeding phase and can last between three to eleven days.

During this phase, the discharge is less and lighter, often pink in color. The vulva is enlarged and soft. The bitch is ready to breed and will allow a male to mate with her.

The estrus stage ends on about the fourteenth day.

In the final stage, diestrus, the discharge becomes redder and the vulva returns to its normal size. The bitch will not accept any male advances in this stage. This stage can take between 60 to 90 days.[3]

Related: Why Does My Dog Whine and Cry in the Morning?

To stop a male dog from whining when a female is in heat, keep him as far from the female as possible. Ensure he gets lots of mental and physical exercise as well. You can also consider neutering a male dog when he is over 12 months of age.

Daily walks, chewing toys, and playing with your male help release pent-up energy. It eases frustration and makes your dog feel too tired to roam the streets in search of the bitch.

Dog training is also a great way to teach your dog to socialize while giving it mental and physical exercise.

Create as much distance as possible between an intact male and a bitch in heat.

For example, keep your male dog inside or fenced in the back garden if a neighbor’s bitch is in heat and often walks past your home.

Keep an intact male and female dog in heat as far away from each other as possible if they live in the same household.

Keep one dog in an enclosed front garden and the other in the back. Yet, a determined male dog can try to jump over or dig under a fence to get to a bitch in heat. High fences reinforced with wire fencing or chicken wire under the ground can help stop either dog from evading the boundaries.

Supervise your bitch in heat when letting her outside to ensure your male dog or any of the neighborhood dogs, don’t get to her.

It’s going to be the longest 21 days of your life if you have to keep your fertile male dog away from females in heat all the time. A kinder solution is to have your male dog boarded at a local dog kennel. You can also let it stay with family or friends until the bitch’s heat is over.

If you are not planning on breeding your dogs, many vets recommend spaying and neutering them. This stops males from whining, as they no longer have the desire to reproduce.

9 Things To Know Before Neutering or Spaying a Dog

Here are nine things to know before neutering or spaying your dog:

The Benefits of Getting a Male Dog Neutered

According to VCA Animal Hospital, these are the benefits of getting a male dog neutered:

Related: Dog Whining After Surgery: Why & How You Can Stop It

Can a Male Dog Be In Heat?

No, male dogs do not go into heat. Male dogs are fertile from the age of sexual maturity, which occurs between six and twelve months of age. On the other hand, sexually mature female dogs are only fertile and ready to breed twice a year when in heat.

Does It Mean My Male Dog Is in Heat if He Won’t Stop Whining?

No, male dogs do not go into heat. From the moment a male dog reaches sexual maturity, which can be between six and twelve months of age, it is fertile. There are several reasons for a dog to whine including pain, a need or want, excitement, anxiety, or submission.