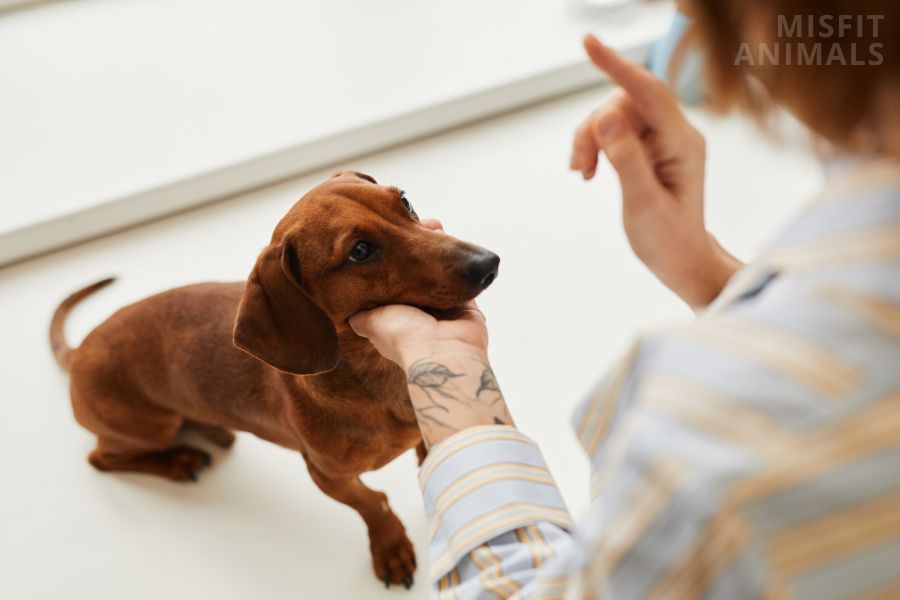 Yes, dogs can understand English. If you speak English to your dog, they can learn specific words as well as interrupt your tone.

When you get home, do you greet your dog and tell it about your day?

Many people do, but does your dog understand what you’re saying? Does it even matter if you speak to it?

In this article, we answer look at how dogs interpret what we say, why talking to dogs matters, and if it’s possible to teach dogs English words.

Yes, dogs can understand an array of English words. What’s more, research has found that they understand words independently of the tone of voice they are spoken.

Does your dog know its name? There was a time when scientists believed dogs didn’t know their names, but only the tone we use when calling them.

Scientists used to believe that dogs didn’t understand words, including their own names. They believed that dogs respond to the sound of your call rather than their name.[1]

Many dog owners disagree and recent research concurs. Researchers have found that dogs can learn an array of English words.

They tested how dogs process vocabulary and tone by getting trainers to do the following:

The study found that regardless of intonation, dogs recognize each word. They also found that dogs used both words and intonation to interpret the reward value of what people say.

Simply put, dogs understand both human words and the intention indicated by the tone of voice.[2]

Is It Important To Talk To Your Dog?

Yes, it’s important to talk to your dog as it helps increase attention and responsibility. Talking to your dog helps you build a bond and can help boost their attention span.

According to a study from the University of York, talking to your dog (and the way you talk to it) helps create a bond between you and your dog.

Talking To Your Dog Is Bond Building

People tend to talk to dogs in a high-pitched rhythmic speech pattern dubbed ‘dog-speak.’  According to research from the University of York, dogs are more receptive to people when they use dog-speak.

The study also suggests that using dog-speak helps improves a dog’s attention span and boosts bonds between pet and owner.

This is compared to the way ‘baby-talk’ helps babies bond with their parents.[3]

Dogs are social creatures. They value communication. While they can’t talk to us in English, dogs try to communicate with us by whining, barking, howling, and using their body language.

By talking to them, we are showing them that we value them as part of our pack.

Related: Why Does My Dog Whine and Cry in the Morning?

How Many English Words Can Dogs Learn?

Dogs can learn between 150 to over 1,000 words, depending on the breed and training methods used.

According to Stanley Coren, PhD, a leading dog researcher and author of numerous books on canine behavior, most dogs can understand more than 150 words.

This aligns their ability to understand with a 2–2.5-year-old child.

Dogs’ ability to learn words depends on their intelligence. Some dog breeds are more intelligent than others with border collies being the smartest.[4]

This makes sense when we think of the Chaser, a border collie that learned more than 1000 proper nouns.[5]

The Dog That Learnt Over 1000 Words

Known as the smartest dog in the world, Chaser was trained by John Pillay, a psychology professor who once believed that dogs didn’t learn words.

According to the science of the time, dogs didn’t know their name as they couldn’t learn nouns. A group of farmers Prof Pillay spoke to challenged this theory. One said he could call one of his border collies by name from a group of four dogs and ask the dog to fetch two specific sheep, by name, out of a flock of 100 sheep.

This inspired the retired psychology professor to teach a border collie the English language.

He started training Chaser when she was 2 months old and by the time she was an adult dog, she learned over 1,000 words.[5]

Chaser’s ability to learn so many English words and phrases gained interest far and wide. The media covered the story in print and in a number of TV shows. It also made many dog owners wonder if they can teach their dogs to understand more English words.

How To Train Your Dog To Understand English Words

You can teach your dog to understand English using a method called “errorless learning”. Tell your dog the name of an object and play games where you ask your dog to catch and find the toy.

He did this using a training strategy called “errorless learning”.

What Is Errorless Learning?

Errorless learning is a training strategy that ensures the dog can’t fail. This method differentiates itself from traditional trial and error training as the learning environment is set up for success instead of failure.

The traditional trial and error method makes the subject fail until it completes the tasks correctly. This results in a lot of effort without reward, causing frustration.

Following the errorless learning approach, every effort is rewarded and the dog is not demoralized by repeating mistakes. [6]

Prof Pillay made it work for Chaser by playing fun games. For example, he would name an item, show it to Chaser, and then say “catch the item” while throwing it to her. Next, he would put it in front of her and say, “find the item.”

He would play these games a few times over two days.

On the third day, he would ask her to find the ball in another room. If she did this successfully, he knew she had learned the word ‘ball’ and could move on to teach her the name of another object. [5]

Yes, dogs can learn to understand whatever language their owners speak to them on a regular basis or train them to learn. Research has found that they can even tell the difference between languages they know, languages that are new to them, and nonsense.

A study published in the journal NeuroImage found the following:

The researchers trained 18 dogs to lie still in an MRI scanner and test their response to different languages – Spanish, Hungarian, and a scrambled nonsense language.

While the dogs’ brains were scanned, they were played recordings in Hungarian, Spanish, and a nonsense language.

When comparing familiar with unfamiliar languages, the scans showed activity in the secondary auditory cortex. This indicated that dogs can tell the difference between a language they know and one they don’t.

The study also found that older dogs had more activity in their secondary auditory cortex when listening to the recordings.

The researchers believe that it means older dogs, who have more experience with languages, are better able to tell the different languages apart.

Talking to a dog is not crazy. It can help you bond with your dog. The more time you take to talk to your dog, the more words they are able to learn.

While dogs can’t talk back to us in a human language, training a dog to understand more words can be useful to people who rely on assistant dogs, like guide dogs or police dogs.

The process of teaching your dogs new words using play is also an engaging way to mentally stimulate a dog and have fun together. It’s an all-around win-win in any language.