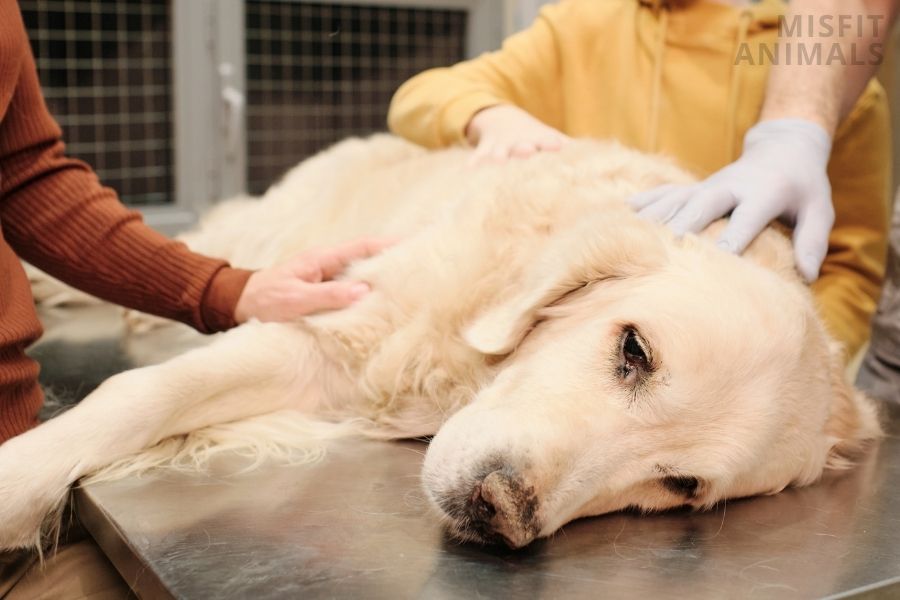 Melatonin is safe for dogs as long as you respect your vet’s recommendations. It is a hormone produced by the brain that can also be found in some foods and supplements. It is prescribed by vets for behavior and sleep disorders, alopecia, and other medical conditions.

Some dogs are terrified on the 4th of July or New Year’s Eve when the fireworks start. Others hide under the bed when a big storm is coming. For these behavior disorders, the vet can prescribe melatonin for your dog.

Melatonin is considered a safe supplement as long as you respect the vet’s recommendations.

Regular dosages can have some mild side effects. An overdose can have severe symptoms that can endanger your pet’s life.

Don’t forget to consult your veterinarian before you give melatonin to your dog.

Melatonin is a natural hormone that is produced by the brain, which helps regulate and maintain the circadian rhythm. With age, melatonin production decreases in both humans and pets. It is found in some foods and supplements, such as tablets, capsules, liquids, gummies, or implants.

Melatonin is a hormone produced mainly by the pineal gland in the brain and other tissues. It is derived from the “happiness hormone” serotonin.

Its main role is to regulate and maintain the circadian rhythm, telling the body when to sleep and wake up. Darkness stimulates the pineal gland to start melatonin synthesis, while light suppresses it.

In these cases, melatonin can be prescribed by your vet.

Can I Give My Dog Melatonin?

You can give melatonin to your dog on the advice of a veterinarian. Melatonin can be prescribed for behavior and sleep disorders, anxiety, hair loss, relaxation before a stressful experience, and other medical conditions.

Melatonin is a natural sleep aid that is safe for dogs if it is administered at the right dosage. The dosage recommendation is 1 mg melatonin for 10 lbs. (~4.5 kg) for sleep disorders.

The most common use of melatonin is in sleep disorders and some behavioral disorders. But it can also be prescribed in case of alopecia-x, flank alopecia, or Cushing’s disease.

Melatonin’s effects can be seen in approximately 30 minutes if used for behavior or sleep disorders. It can cause mild side effects, and overdosing can lead to severe symptoms.

Melatonin can be prescribed to dogs in case of:

Older dogs produce less melatonin than younger ones. In this case, melatonin is given to relax and make them sleep longer.

Melatonin can be prescribed to hyperactive puppies that are over 12 weeks of age.

Melatonin can improve coat condition and can be administered to dogs that are suffering from flank alopecia and alopecia-x. These disorders require long-term administration of melatonin.

Cushing’s disease (or hypercortisolism) is characterized by the association of specific symptoms caused by hypersecretion of glucocorticoid hormones (cortisol) by the adrenal glands.

The melatonin levels are low in this disorder. As studies suggest, melatonin can work as an antiadrenocortical or antistress factor.[2]

Some dogs that suffer from aberrant adrenocortical disease, which is a variant of Cushing’s disease, have a favorable clinical response to melatonin, while other dogs do not present a response.[3]

Is Melatonin Safe for Dogs?

Melatonin is safe for dogs when it is properly administered. You should never give melatonin without talking to your vet first. It’s advisable not to give melatonin to pregnant or lactating females and puppies under 12 weeks of age.

Melatonin is not a well-studied supplement in pets but veterinarians recommend it for various medical conditions.

Melatonin can worsen some diseases and can react with drugs, such as:

*Melatonin may potentiate their effects.

Melatonin has mild side effects and many pet owners prefer it instead of other drugs that can contain strong chemicals.

What Happens if You Give a Dog Too Much Melatonin?

If you give too much melatonin to your dog, you may notice:

If you think your dog ate or you gave it too much melatonin, contact the vet’s office as soon as possible.

If your dog is on melatonin for long-term treatment and you noticed one of these symptoms, interrupt the administration and contact your vet.

Melatonin dosage is calculated according to your dog’s weight and medical condition. The melatonin dose for anxiety is different from the dose for sleep disorders. Melatonin should be administered after you talk to your vet.

The dose of melatonin in dogs is dependent on the medical condition that is treated and the pet’s weight.

According to Plumb’s Veterinary Drug Handbook, dogs that have sleeping disorders can take between 3 and 6 milligrams of melatonin.[4]

Melatonin can be administered for sleep disorders as follows:

For anxiety and phobias, the melatonin dose is half the dose for sleep disorders. If your dog is 10 pounds, it should take 0.5 mg of melatonin instead of 1 mg.

In the case of alopecia or Cushing’s disease, treatment with melatonin is long-term.

Always talk to your vet before administering medicines to your dog.

How Much Melatonin for Large Dogs?

Large breeds can be given up to 6 mg of melatonin, or over, depending on their suffering. Dogs suffering from flank alopecia can be prescribed doses of up to 10mg/dog. For alopecia-x, dogs can take up to 12 mg melatonin.

How Much Melatonin for Small Dogs?

Related: What to Do If Your Dog Ate Melatonin

Can Melatonin Kill a Dog?

It is unlikely for melatonin to kill a dog even at high concentrations. It is generally safe for dogs if taken in the right amount. If your dog ate a lot of melatonin, contact your vet immediately.

A large dose of melatonin is unlikely to kill a dog but it can happen. Melatonin overdoses can lead to severe symptoms such as incoordination, high blood pressure, and seizures. If you notice any of these symptoms, stop giving your dog melatonin and contact the vet’s office as soon as possible.

Melatonin is not dangerous to dogs unless they are allergic to it.

Melatonin poses a great risk to dogs when the supplement contains xylitol. Xylitol is an artificial sweetener that is toxic to pets and can lead to poisoning and death.

Fruit-flavored melatonin gummies usually have xylitol in their composition. It is better to read the product label carefully before buying or administering melatonin to your dog.

Always notify your vet if your dog is taking other drugs as melatonin can interact with some of them and can potentially worsen various medical conditions.

Do not give melatonin to lactating or pregnant females as it can alter serum sex hormone concentrations (estradiol and testosterone).[5]

Because there aren’t many detailed studies on melatonin in pets, it is advisable to administer it with caution. Follow your veterinarian’s recommendations.

Melatonin’s effects can be noticed 30 minutes after administration in case of behavior or sleep disorders. In systemic diseases, such as Cushing’s, melatonin effects are seen after long-term administration, if any.

Melatonin is generally prescribed to aid dogs (especially older dogs) that suffer from sleep disorders. It induces sleep and helps them sleep longer.

For anxiety in dogs, such as separation or noise anxiety, melatonin is prescribed to help them calm and relax. For the same reason, melatonin can also be administered to hyperactive puppies over 12 weeks.

Due to its calming effects, melatonin is also administered by vets to anxious dogs before and after surgery.

For its mild side effects, melatonin is considered gentler than the traditional medication that is used in Cushing’s disease. Melatonin does not work for all dogs.

Melatonin Side Effects in Dogs

Melatonin has a few side effects that do not endanger your dog’s life. The rare reactions that can occur have been reported by dog owners. The most common side effect of melatonin is drowsiness, especially when the pet wakes up.

Side effects from using melatonin in dogs are rarely reported.

Although there is not much research on melatonin and its side effects, the most common ones are:

If you notice any of these symptoms after your dog took melatonin, interrupt administration and contact your vet.

To be safe, always talk to your veterinarian before administering supplements or drugs to your dog.

Melatonin is considered safe for dogs, and it’s unlikely it can kill them. But this doesn’t mean it is impossible. Fruit-flavored melatonin gummies should be avoided as they can contain xylitol, which is toxic to pets. Xylitol poisoning can lead to death.

Like any other supplement or drug, melatonin can cause an allergic reaction in dogs, especially if it’s combined with other ingredients. If you respect the recommended dosage and do not give your dog more melatonin than it should, your dog should be fine because it has few to no side effects.

The side effects that were reported are rare and minimal. The most common side effect seen in dogs is drowsiness, especially when they wake up.

Melatonin overdoses can lead to severe symptoms, including incoordination and seizures. Follow your veterinarian’s advice when administering melatonin or other supplement or drug.

Is 10mg of Melatonin Safe for Dogs?

10mg of melatonin is safe for some dogs. The dose of melatonin is calculated according to your dog’s weight and medical condition. For behavior and sleep disorders, even for dogs that are over 100 pounds, 10 mg of melatonin is too much. Talk to your veterinarian before administering it as an overdose can cause severe symptoms.

Will 5mg of Melatonin Hurt My Dog?

Can Melatonin Cause Side Effects in Dogs?

Yes, melatonin can cause side effects but they are rare and minimal. The most common side effect is drowsiness or lethargy, which is observed especially when the pet wakes up. Other side effects include gastrointestinal problems or itching.

Can a Dog Overdose on Melatonin?

Yes, a dog can overdose on melatonin if it ate too much. Symptoms can start with vomiting or diarrhea and turn into incoordination, fast heart rate, high blood pressure, and seizures.