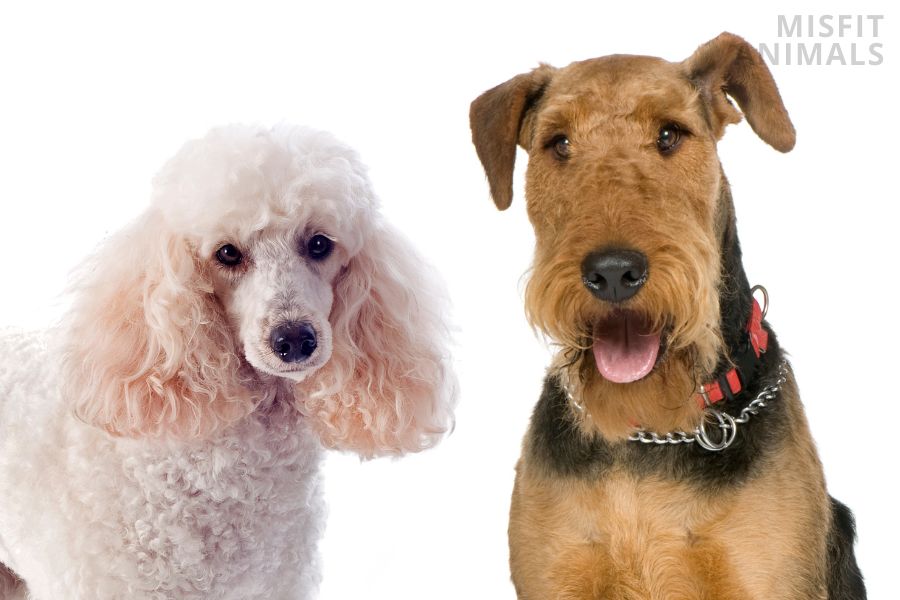 Airedoodles are airedale terriers mixed with poodles. This mix is loyal and extremely smart. They can be medium, miniature, or toy-sized. Airedoodles come in a wide variety of colors and are hypoallergenic.

Airedoodles have many great qualities. These are qualities they inherit from their parents: the Airedale Terrier and Poodle.

Their balanced personalities make them easy candidates for the perfect dog.

This article discusses the following aspects of Airedoodles:

Airedoodles are extremely intelligent and outgoing. They are loyal and have a well-developed territorial instinct.

This mix forms strong bonds with their owners and doesn’t like being separated from them. They can engage in problematic behavior if they don’t get enough exercise though.

This table lists the main characteristics of Airedoodles.

3 Reasons To Get an Airedale and Poodle Mix

Airedale and Poodle mix dogs are hypoallergenic. They are also smart and make great watchdogs.

Airedoodles are a great choice for people with dog allergies, which was between 10 and 20% of the worldwide population in 2018[1]. This percentage is on the rise.

As a result, the popularity of Airedoodles is on the rise.

Both Airedales and Poodles are hypoallergenic breeds. This doesn’t mean that Airedoodles never trigger allergic reactions, but the chances are low. No dog is 100% hypoallergenic.

People have allergic reactions to 7 allergens present in[2]:

Airedoodles are minimal shedders. As a result, they are hypoallergenic. Contrary to popular belief, dogs’ hair does not cause allergies. Dander does. The dander attaches to dead hair and gets released into the air causing allergic reactions.

Airedoodles inherit their high intelligence from their parents.

A study[3] that analyzed the working intelligence and obedience of 130 breeds placed Airedale Terriers in 29th place. The same study suggests Poodles are the second most intelligent breed.

Airedoodles easily learn new tricks. If they resemble Poodles, they understand new commands in fewer than five repetitions. They also obey the first command more than 95% of the time.

Airedoodles have a well-developed protective instinct. They are territorial and don’t always get along with strangers or other dogs.

This makes them great watchdogs.

They can engage in aggressive behavior if someone trespasses their territory. Make sure that people who are unfamiliar with your dog don’t come over uninvited.

3 Reasons Not To Get an Airedoodle Dog

Airedoodle dogs bark a lot. They are not suited for apartment living and don’t like to be left alone.

On a scale from one to five, Airedoodles are a four in terms of barking. They are sometimes loud which is why it is best to learn to control this behavior.

You can control barking by teaching them “quiet” commands and reducing their stress levels. Stressed Airedoodles bark more.

Airedoodles are highly energetic. If you keep them inside all day, they will not be able to burn their energy.

If they are left alone, they can become frustrated and engage in destructive behavior.

If it’s unavoidable, you can keep your Airedoodle in an apartment if you provide at least 2 hours of exercise per day. This includes walking, jogging, and playdates.

Airedoodles have a predisposition for separation anxiety[5]. They like to be surrounded by other people or dogs. They also form strong bonds with their owners and quickly feel lonely.

Here are some issues experienced by Airedoodles with separation anxiety[6]:

Airedoodles are thought to come from the United States. The mix is relatively new, yet there is no official information about when and where the mix first appeared. The parent breeds have a long history that dates back to the 17th century though.

Airedales were initially bred in England on the valley of River Aire around the 19th century.

This breed was developed by men who needed work done around the house but refused to keep multiple dogs. They were bred as working dogs with multiple jobs, such as hunting and protecting the home.

The American Kennel Club recognized Airedales as a Terrier breed in 1888.

The origin of Poodles has been debated for a long time. Some experts claim Poodles originate from France, while others say they come from Germany.

Poodles date back to the 17th century. They were initially bred to retrieve prey from the water.

The American Kennel Club recognized Poodles as a non-sporting and toy breed in 1886.

Poodle Airedale Terrier mixes vary from toy size to standard size, depending on the size of their Poodle parent. They come in a wide variety of colors and are either single or double-coated. Their hair is medium or long, with a wiry or curled texture.

Airedoodles come in one of the following colors:

The size of Airedoodles depends on the Poodle used for breeding. Their height varies from 9 to 24 inches (24 to 60 centimeters) and their weight from 14 to 71 pounds (6.5 to 32 kilograms)

When mixing Airedoodles with Poodles, breeders use one parent of each breed for the first generation. Afterward, they use the crossbred offspring as parents. This way, they can control their size and other desired features.

Mini Airedoodles are the result of crossbreeding Airedales with toy Poodles.

These tables illustrate the average height and weight of Airedoodles, according to the height of the Poodle parent. Because of the possibility of Airedoodles growing larger, the maximum values are listed as for the larger parent breed.

Airedoodles are active and alert. As highly intelligent and confident dogs, they like to lead but are also obedient to their owners. The Airdoodle mix is also friendly and outgoing, with an extreme level of loyalty and protectiveness to their family members.

Researchers found differences between breeds in brain development. They concluded that the purpose of dogs influences how their brains developed over the years[7].

Dogs pass these traits on to their offspring.

Airedales were used for:

The roles of Airedales in the military during WWI:

Poodles were initially bred as hunting dogs. Their purpose was to retrieve the prey from lakes and rivers. Their purpose changed over time and they became companion dogs.

Airedoodles have inherited the following traits as a result of the purpose of their parents:

Airedoodles don’t go through a lot of health issues during their lifetime. They do have predispositions to several health issues specific to their parents.

The following health conditions are more likely to appear in Airedoodles:

To prevent these health issues, it is essential to get your Airedoodle checked once a year by a vet. The vet will run various tests, including ophthalmology exams and blood work.

Airedoodles live between 10 and 15 years. Crossbreeds live 1.2 years longer than purebreds, on average. The life expectancy of Airedoodles depends on their genes, lifestyle, and environment.

Here are the factors that can reduce the longevity of Airedoodles:

Adult standard Airedoodles need between 1.5 and 3.5 cups of dry food per day.

Because they are prone to food allergies, Airedoodles shouldn’t eat ready-made food. These often contain many preservatives and taste enhancements.

Some types of ingredients, such as soy, eggs, and wheat can cause allergic reactions in Airedoodles. Fish, dairy, and beef should also be avoided.

Some Airedoodles resemble Airedale terriers in terms of body shape. They have narrow deep chests. This can predispose them to bloat which can lead to serious health issues.

Here are 4 ways to prevent bloating in Airedoodles:

Airedoodles’ grooming depends on which parent they inherit their coat from. If they have a Poodle coat, their hair is continuously growing. As a result, you need to trim their coat once a month. Airedoodles who have Airedale coats need professional grooming once every three months.

Because they have sensitive skin, it is essential to avoid the following ingredients in shampoos and conditioners:

Airedoodle puppies cost around $1000. Their price is influenced by their age and the quality of their parents.

If you buy an Airedoodle from reputable breeders, they undergo medical procedures such as vaccinations, medical tests, and spaying or neutering. This leads to a higher price.

You can also adopt Airedoodle puppies from shelters or directly from owners. This option reduces your costs.

Unfortunately, Airedoodles are not popular. This makes it difficult to find someone prepared to give them up.

Airedoodles have many qualities that make them a great mix. They are hypoallergenic and have outgoing personalities. They are highly intelligent and learn new things relatively quickly. Airedoodles love their owners and have a predisposition for separation anxiety. They are relatively healthy and not expensive. Overall, they are great to have around. 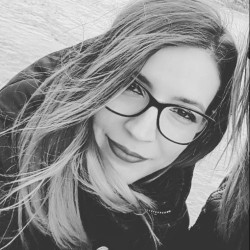