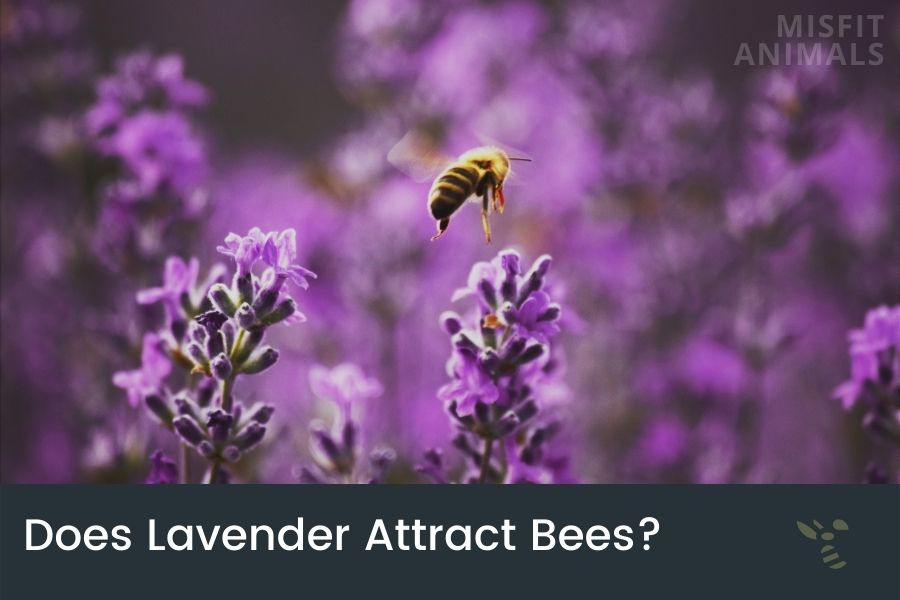 Bees are attracted to lavender due to the color, shape, and nectar. Lavender is a nectar-rich flower, which is an important factor for bees.

While many plants can attract bees, lavender is one of the most popular. Bees like to visit this plant because it produces a lot of nectar and pollen.

They also like the smell, which is very sweet.

In this article, we’ll talk more about how lavender attracts bees, why it’s important, and how you can use lavender to lure bees to your garden.

Yes, lavender does in fact attract bees. They’re one of the best flowers for attracting bees, due to the fact that they have the ideal shape, color, scent, size, and they produce plenty of nectar.

Bees are generally attracted to certain traits. This does depend on the location, climate, and species of bees.

For example, some bees are more attracted to blue flowers, while others seek more towards green flowers, depending on the native flowers in their habitat.

Does Lavender Keep Bees Away?

No, lavender does not keep bees away. On the contrary, bees are very much attracted to lavender. Bees love lavender and will flock to it.

Lavender is often planted near beehives because they have multiple benefits to bees.

Lavender contains a compound called linalool that the bees can find attractive [1]. This compound gives lavender its characteristic fragrance and is also found in other plants, such as mint and basil.

However, one study suggests that too much linalool will achieve the opposite effect, driving bees away.

Why Does Lavender Attract Bees?

Lavender attracts bees for a number of reasons, but primarily because of the color, nectar, and shape. These three are the most important factors for why bees are attracted to certain flowers.

Bees are partly attracted to lavender flowers because they can obtain significant amounts of nutrients from them.

Bees eat large amounts of honey on a daily basis (relative to their size). They’re very efficient foragers, meaning they always forage from the flower with the most nectar first.

One of these flowers is lavender.

Related: What attracts bees the most?

One reason lavender’s color attracts so many insects is because of its color.

Bees are, generally, more attracted to blue and violet colors, while they’re less attracted to red and dark colors. Bees are also attracted to contrasting colors.

Lavender is both violet, and most often stands out compared to its surroundings. Hence, bees can easily spot the flowers when flying by.

Lavender also contains a high concentration of both flavonoids and powerful natural oils and essences.

Related: Which Colors Are Bees Attracted to the Most?

Nectar is a sweet liquid produced by plants. The nectar attracts animals such as birds and bees, which assist in transferring pollen to other plants, thereby enabling fertilization and sexual reproduction.

Lavender plants are rich in nectar, attracting bees and other animals that assist in pollination.

Since bees are so very efficient (the most efficient animal on the planet, second to humans), they prioritize foraging from nutrient-rich flowers, whether it be nectar or pollen.

The lavender plant possesses a unique tubular form that attracts insects. The length of each tube helps attract pollinators with long tongues, as it makes nectar easily accessible.

The narrow petals curve away from the stem making access to nectar easy.

Lavender typically forms in clusters, meaning bees can easily access nectar from multiple at a time, making it even more efficient.

Which Bees Are Attracted by Lavender?

Bees that are commonly attracted to lavender include honey bees, bumblebees, and Mason bees. The attraction of these bees is due to the nectar and essential oils in lavender.

Research shows how bumblebees are attracted more to lavender than honeybees because they have longer tongues. Bumblebees can simply extract the honey faster. [2]

Bumblebees are approximately 3 times faster at handling lavender than honeybees.

The nectar in lavender flowers contains a high percentage of sugar, which the bees rely on for energy.

In addition to the essential oils, lavender also provides pollen for the bees. This pollen is high in protein and helps to bolster the bee’s diet.

How Do You Keep Bees Away From Lavender?

If you have lavender plants in your garden, and you want to keep bees away, you can do a few things – but it’ll be a difficult task.

Here are a few ways that you can keep bees away from lavender.

All in all, it’s difficult to keep bees away from lavender, as they’re very much attracted to the plant.

How to Grow Lavender for Bees

If you want to grow lavender to attract bees, here are some tips you can follow:

While lavender is an excellent plant for bees, as it provides them with nectar and pollen, certain varieties are better than others.

Lavender “Gros Bleu” is a wide variety of lavender that is known for its large flowers. When blooming, they have a deep blue color, and they are sure to attract bees. Lavender ‘Gros Bleu’ grows best in zones 5-9.

Lavender “Hidcote Blue is a popular variety that is commonly used for its scent. This variety of lavender has beautiful gray-green foliage and purple flowers. It grows well in zones 4-9.

Lavender “Munstead” offers blooms that range from light violet to white, along with silvery foliage. This variety of lavender is very hardy and easy to grow, making it a popular choice for beekeepers. It thrives in zones 4-8.

Lavender “Provence” was developed in the south of France and had an abundance of blooms that range from purple to pink. The scent of this variety is also powerful. It does best in zones 5-9.

Lavender “Vera” blooms for an extended period and has light purple flowers with dark centers that attract bees. This variety of lavender grows well in zones 6-8.

Lavandula angustifolia is a common variety of lavender that is widely used. It does well in colder zones and has beautiful purple flowers.

Lavandula stoechas is another popular variety of lavender that is often used in aromatherapy. This type of lavender has fluffy, deep purple flowers that are sure to attract bees. It grows well in zones 8-10.

What Else Attracts Bees?

There are many other plants besides lavender that attract bees. Plants like cosmos, marigolds, zinnias, rudbeckia, sunflowers are just a few of the common flowers that draw pollinators to your garden.

Many herbs can also work as bee magnets.

When planting a garden for bees, it’s important to plant a variety of flowers. Bees are generally attracted to all flowers in bloom, as long as they provide some form of nutrients (pollen or nectar).

Planting various flowers and herbs will provide pollen and nectar for different times of the year, ensuring that the bees have a constant food source.

If you’re committed to helping the bees, plant a garden that helps feed them over the winter.

Lavender is great at attracting bees. They produce a lot of nectar, which bees use to make honey. Lavender also has the ideal color and shape, which helps attract bees even more.

Studies suggest that bumblebees are more attracted to lavender than honeybees, as they have longer tongues. This allows them to access nectar more quickly.