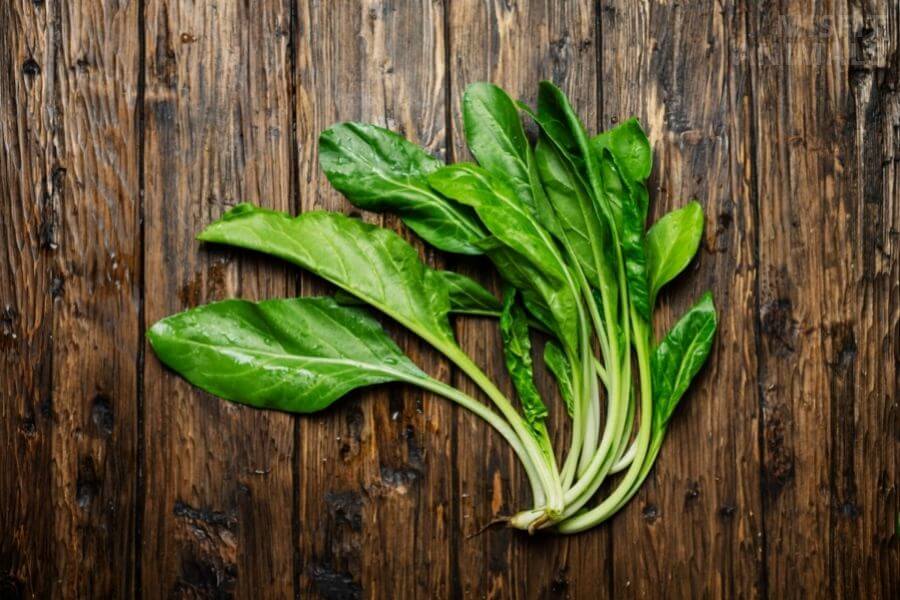 Dogs can eat Swiss Chard, and they’re nutritious as it contains Calcium, Iron, and other nutrients. Feed your dog Swiss chard sparingly as large amounts can cause kidney stones.

Dogs are omnivores – they feed on plants and meats. The American Kennel Council (AKC) listed several leafy vegetables as safe for dogs, such as celery and spinach.

But can dogs eat Swiss chard?

This nutritious leafy vegetable is a close relative of spinach and kale. When eaten in high amounts, it causes kidney-related problems due to oxalate – a compound found in Swiss chard.

In this article, we’ll take a look at whether Swiss Chard is safe for dogs or not, and how you can feed swiss chard to your dogs.

Yes, dogs can eat swiss chard in small amounts. They contain Vitamin C, A, E, K, and other nutrients, and they’re low in calories making great additions to your dog’s diet.

While other Canis animals, like wolves, are carnivores, dogs (Canis Familiaris) need a healthy balance of meat and vegetables to maintain their physique.

What Parts of Swiss Chard Can I Feed My Dog?

Your dog can eat the entire swiss chard, including its stem; however, cut the stem to small pieces to avoid choking as it’s harder to swallow the stalk compared to the leaves.

Is Swiss Chard Safe for Dogs?

Swiss Chard is safe for dogs as long as it’s eaten in small amounts. This leafy green contains oxalates which cause urinary system-related problems when consumed in high amounts.

Since dogs are omnivores, they have no problem eating swiss chard.

You should only feed your dog swiss shard in small amounts because it contains oxalates – a natural compound that, when consumed in high amounts, causes health complications to dogs such as:

A study found that cooking vegetables, like swiss chard, significantly lessen their oxalate content. The study concluded that boiling your leafy greens decrease oxalates by 30-87%[1].

It’s also important to cut the swiss chard’s stalk into bite-sized pieces because its tough stem is a choking hazard to dogs.

Swiss chard is beneficial to dogs because it contains nutrients essential to maintaining and improving their health.

Calcium, Fiber, Vitamin C, Zinc, Potassium, and other nutrients found in Swiss chard are great for dogs because they are essential to their overall health. They are also low in cholesterol and fatty acids.

Things to Keep In Mind When Feeding Dogs Swiss Chard

Always remember to do the following when feeding your dog swiss chard:

How to Feed Dogs Swiss Chard

If you want to feed your dog swiss chard, you can serve it either boiled or raw. Remember to cut the stem to avoid any choking hazards.

To feed your dogs raw swiss chard, do the following:

While there are other ways to cook swiss chard, boiling your vegetables lessens the oxalates in them, making them less susceptible to oxalate-caused health complications.

To feed your dogs boiled swiss chard, do the following:

Given that swiss chard can cause health problems when eaten in large amounts, dog owners can opt to choose alternatives for their dogs’ diet.

Here are some healthy veggies that you can feed your dog:

Dogs can eat swiss chard if added to their regular diet. It is safe to consume as long as it’s eaten in small amounts. This leafy vegetable contains several essential nutrients that help keep your dog healthy. It is low in calories and fats, making it a great food alternative if your dog’s on a diet.

Although Swiss chard is beneficial, it should only be served to dogs sparingly – too much can cause health complications. Pet owners can feed their dogs other vegetables, such as lettuce and broccoli, instead of swiss chard.

Can I feed my dog Rainbow Chard?

Yes, rainbow chard and swiss chard are almost the same vegetables, except rainbow chards have a colorful stalk instead of white[6].

Yes, green chard is another name for swiss chard. It is a leafy vegetable with several nutritional benefits. If consumed in high amounts, it can cause health complications, so feed it your dog sparingly.

Is Kale mixed with Chards good for dogs?

No. Although both vegetables are beneficial to dogs, mixing them will only increase the number of oxalates in your dog’s diet. The higher the oxalate content, the higher the risk of kidney-related problems.