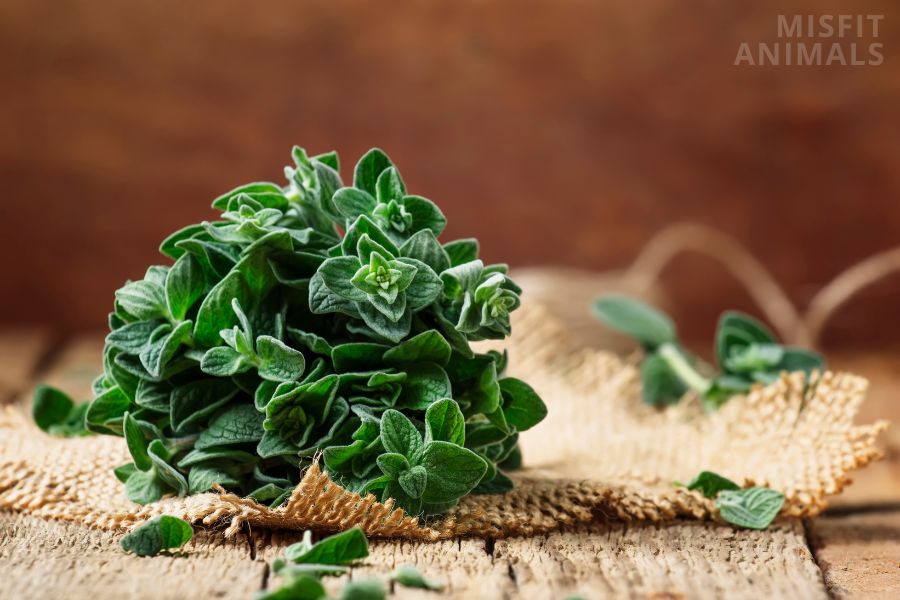 Yes, dogs can eat oregano in moderation. Small amounts can have benefits, while large amounts will cause health problems. Many dog owners use it as a medicinal herb or as a rare treat.

But, people use herbs when cooking, and not all herbs are safe for dogs.

So, can dogs eat oregano? Or is it toxic to canines?

in this post, we’ll explore everything there is to know about giving oregano to dogs. We’ll cover what Oregano is, the benefits of giving it to your pup, and the potential risks associated with feeding it to your furry friend.

Dogs can have oregano in moderation. It has both vitamins and minerals which are beneficial to dogs. While it’s safe in small amounts, too much can cause issues.

Oregano contains a compound called carvacrol, which can be toxic to dogs in large amounts.[1]

But, oregano is also a good source of vitamins and minerals, so it can be beneficial for dogs in small amounts.

If you do give your dog oregano, make sure to monitor them closely for any signs of gastrointestinal upset.

Is Oregano Safe for Dogs?

Yes, oregano is generally safe for dogs when given in small amounts. Oregano can be a helpful herbal remedy for many common canine ailments such as upset stomach, gas, and diarrhea.

Oregano is a member of the mint family and is related to both marjoram and thyme. This herb is native to the Mediterranean region and has been used for centuries in both cooking and medicine. Oregano also contains thymol, another compound that has antiseptic and antibacterial properties [2].

Is Oregano Good for Dogs?

Oregano can be good for dogs if used correctly. There are a number of benefits that oregano can offer to dogs, but it can easily cause harm as well.

Oregano has several benefits, which is why it’s used as a medicinal herb. Whether or not dogs feel these benefits is not sure. There are no studies that prove oregano’s medicinal properties.

A proper diet is always the best approach for a healthy pup.

Oregano is native to the Mediterranean region and has been used for centuries in traditional medicine. It contains a compound called carvacrol, which is thought to have antioxidant and antibacterial properties.

Some people believe that oregano offers health benefits for dogs.

Here are a few potential oregano health benefits for dogs:

It is important to note that there is no scientific evidence to support these claims. Oregano should not be used as a substitute for conventional medical care. If you are considering using oregano for your dog, please speak to your veterinarian first.

As a natural herb, with plenty of vitamins and minerals, oregano may help boost the immune system. This is important to keep illness and infections at bay.

One of the most important benefits of oregano is that it is a natural antibiotic. This means that it can help to fight off infections, both bacterial and viral.

Oregano can help reduce anxiety and stress in dogs. It is often used as an oil for this purpose. Some people claim that one to three drops of oil a day can work miracles for the mind.

In addition to these benefits, oregano is also a good source of antioxidants[3]. These are important in helping to protect the body against free radicals, which can cause damage to cells and DNA.

Antioxidants also help to reduce the risk of some types of cancer.

How to Feed Dogs Oregano

Oregano has a strong, pungent flavor that can add a lot of depth to dishes. This is why it should also be used in moderation for dogs.

Here’s how to feed oregano to dogs:

Oregano is safe for dogs, but it is important to give the proper amount. Too much oregano can cause gastrointestinal upset in dogs.

How Much Oregano Can Dogs Eat?

A good rule of thumb is to start with a pinch and then go up from there based on your dog’s tolerance. Oregano can be added to your dog’s food or offered as a treat.

Oregano is generally safe for dogs to eat in small amounts. It is important to note that oregano is a potent herb, and can cause gastrointestinal upset if fed in large quantities.

As with any new food, it is always best to introduce oregano slowly into your dog’s diet, and to watch for any adverse reactions.

Oregano is a popular herb that is often used in cooking. It has a strong, pungent flavor that can be overwhelming for some dogs.

If your dog does not like the taste of oregano, there are several alternatives that you can try:

Experiment with different herbs and spices to find the best one for your pup.

Dogs can consume oregano in moderation without any problems. It is used as a medicinal herb due to its many health benefits. Check with your veterinarian if you’re unsure whether a particular food is safe for your pup, but in general, oregano is a healthy herb to give to dogs.

Can Dogs Have Oregano and Basil?

Yes, dogs can eat oregano leaves. However, oregano leaves are not a necessary part of a dog’s diet and should only be given to a dog in small amounts. Oregano leaves can be toxic to dogs if consumed in large quantities. Symptoms of oregano toxicity in dogs include vomiting, diarrhea, and difficulty breathing. If you think your dog has consumed too many oregano leaves, contact your veterinarian immediately.

Can Dogs Eat Thyme and Oregano?

Yes, dogs can eat thyme and oregano. Both herbs are safe for dogs to consume in small quantities. Thyme and oregano contain antioxidants and antibacterial properties that can boost your dog’s immune system.

Can Dogs Have Oregano Seasoning?

Yes, dogs can have oregano seasoning. Oregano is safe for dogs to consume in small amounts. Excessive consuming oregano may cause stomach upset in some dogs. If your dog experiences any digestive issues after consuming oregano, please consult your veterinarian.