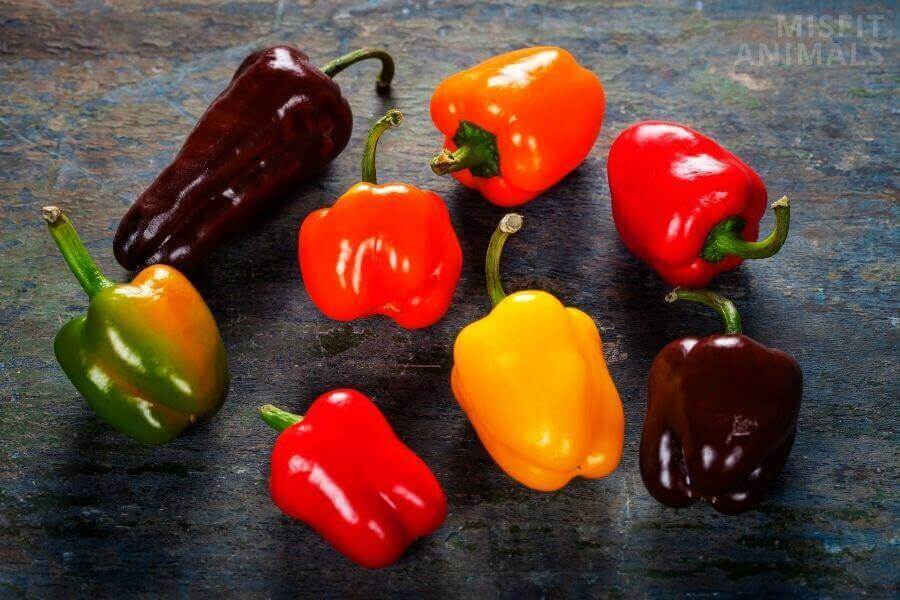 Dogs can eat bell peppers. They are safe for dogs to consume. They have high nutritional value and contain vitamins that are beneficial to dogs’ health.

One of the biggest concerns of dog owners is what food their dog can eat. One food which a great number of people are concerned about is bell peppers. So, can dogs eat bell peppers?

Dogs require water, carbohydrates, fats, proteins, minerals, and vitamins to remain healthy and function effectively. Some of these nutrients cannot be provided by meat alone.

There are ample amounts of commercially processed dog food available in the market. Despite that, some dog owners prefer natural healthy vegetables for their pets.

This article serves as a guide on the use of bell peppers in your dog’s diet.

Yes, dogs can and do eat bell peppers. But like with most things, too much of something can be dangerous. Treating your dog to bell peppers from time to time can be very beneficial to their long-term health.

Bell peppers are sweet peppers that have a unique and intriguing taste to them[1]. They are available in various colors – Red, Orange, Yellow, Green. All of them are safe to consume and provide the essential nutrients to dogs that they can’t get from meat.

Can Dogs Have Red Bell Peppers?

Absolutely! Red peppers are healthier than any other colored bell peppers as they contain the most amount of minerals and nutrients and serve as a better treat for your dog than the other bell peppers.

These peppers generally contain higher levels of beta-carotene[2] than the yellow or green bell peppers, usually about 5.4 micrograms/gram. Beta-carotene is an antioxidant that protects your dog from various diseases and infections. They also help fight inflammation and keep the dog’s vision sharp and prevent eye problems.

Dogs can have red bell peppers in their diet as they are more nutritious than the other types of bell peppers.

Can Dogs Have Green Bell Peppers?

Can Dogs Have Yellow Bell Peppers?

Yes! All types of bell peppers can be consumed by dogs and yellow bell peppers are no exception. They offer a middle point between red and green bell peppers – not too sweet, not too bitter.

Are Bell Peppers Safe for Dogs?

Dogs can safely consume bell peppers as long as they are not substituted for dog food. Bell peppers, or capsicum, primarily contain water along with carbohydrates, fats, and some protein.

They also contain several minerals and vitamins which help keep the dog’s body functioning smoothly and keep them active for longer periods.

Are Bell Peppers Good for Dogs?

With a number of different vitamins, minerals, and carbohydrates, it is safe to say that bell peppers are good for your dog.

Bell peppers contain ample amounts of vital nutrients that are required by dogs to maintain their health and wellbeing. They provide vitamin A, B3, C, and other essential minerals to the dogs which help the dog stay healthy, active, and energetic.

Red, Green, Yellow, and Orange Bell Peppers for Dogs: Which Are Better?

All types of bell peppers can be fed to dogs, but red bell peppers contain more nutritious value that provides a more healthy and balanced diet to the dogs. It must be noted that bell peppers cannot be used as an alternative to regular dog food. Instead, they can be used as treats and occasional healthy snacks.

Are Bell Peppers Bad for Dogs?

Bell peppers are completely harmless and great for dogs. But as with the human diet, anything new should be gradually introduced to the dog’s diet to get an idea of how it responds.

Some dogs like eating veggies, others not so much. Anything in excess can be dangerous and so is the case with bell peppers. Try not to overload and overfeed bell peppers to dogs as it can cause diarrhea or an upset stomach.

Are peppers toxic to dogs?

Bell peppers are not toxic for your dog, but they can cause discomfort and vomiting if not consumed correctly. Remove the stem and the seeds before feeding your dog bell peppers. These parts contain negligible nutrients and are difficult for your dog to digest.

Never feed your dog hot peppers. Bell peppers are unique in the sense that they have a sweet taste. Hot peppers, on the other hand, are not recommended for your dog as they can be toxic to the dog’s health.

Also, avoid cooking bell peppers with garlic or onion. Vegetables of the onion family are toxic for dogs!

Yellow bell peppers contain the most amount of vitamin C among the other bell peppers. Green bell peppers have the lowest calories while red bell pepper has the highest concentration of beta-carotene.

Below is a chart depicting the nutritional values of the three different colored peppers:

How to Cook Bell Peppers for Dogs

Bell peppers can be fed to your dogs either cooked or raw. When cooking, it is important to understand that the outer layer of the bell pepper may be hard for your dog to chew and digest. You can steam the pepper to soften it and make it easier for your dog to digest.

Avoid adding garlic, onion, salt, and seasoning to your peppers as they can be toxic to dogs.

Here are some additional steps you can take to make bell peppers easier to eat for dogs:

If you are looking for alternatives to bell peppers, you can easily switch them out for snap peas or eggplant.

Should Bell Peppers Be Included in a Dog’s Diet?

Yes, bell peppers provide an excellent source of nutrients for your dog, and they can be included in the dog’s diet. It is always recommended to consult with your veterinarian before making any changes to your dog’s diet.

Once you have consulted with the doctor, start incorporating bell peppers in the dog’s diet slowly.

Bell peppers can be a great nutritious snack, but they shouldn’t be substituted for the good old dog food which is an integral part of your dog’s diet. They can also be switched out for banana peppers, or other similar peppery vegetables.

Dogs can have bell peppers in their diet as long as they are not eating them as an alternative to their kibble. They are extremely nutritious which helps your dog remain healthy and eat the natural goodness of the world.

Whether they are red, green, orange, or yellow, bell peppers can be the perfect snack for your dog to get all the essential minerals they don’t get from meat!

Yes, dogs can eat raw bell peppers. Make sure to wash and clean them to get rid of any contaminating bacteria present on the surface of the pepper.

Can Dogs Have Sweet Peppers?

Absolutely! Dogs can eat sweet peppers as they are rich in healthy nutrients and are quite beneficial for them.

Yes, dogs can eat mini sweet peppers. Sweet bell peppers are great for dogs and can be given to your dog at least once a day.