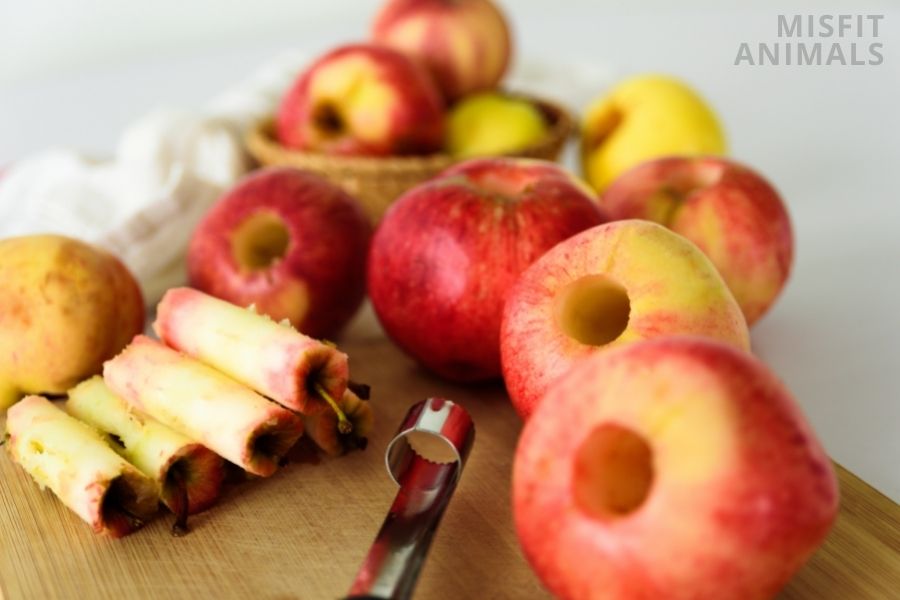 Dogs can generally not eat apple cores. These contain amygdalin, a substance that is toxic to dogs when mixed with their digestive enzymes. If your dog eats the seeds or core of an apple, observe their reaction and prepare for a trip to the vet.

We all know that giving our dogs table scraps is generally not a good idea, as they can often be filled with unhealthy ingredients and additives.

But what about apple cores?

Can dogs eat apple cores? And if so, are there any nutritional benefits to doing so?

In this blog post, we’ll take a closer look at the nutritional value of apple cores for dogs, and whether or not this snack is a healthy option for your pup.

Apples are good for dogs, but that only goes for the flesh. Dogs should not be given apple cores or seeds, as these can be harmful due to their amygdalin content.

There’s some debate over whether or not dogs can eat apple cores. Some say they’re fine, while others believe they can cause intestinal blockages.[1]

As with most things related to dogs and their diet, it’s best to err on the side of caution and not give them apple cores to eat. You can consider separating the apple cores instead.

Are Apple Cores Safe for Dogs to Eat?

No, apple cores are not safe for dogs to eat. The amygdalin in the seeds can result in issues. Apple cores are also great choking hazards.

The answer to this question is somewhat complicated. Some claim that apple cores are not poisonous to dogs unless they consume a lot. Research shows that apple seeds do contain naturally occurring chemicals that can put your dogs at risk.

Who are you to trust?

Experts do not recommend feeding apple cores to dogs. It is an unnecessary risk. That’s why it’s essential to look for other snacks other than apple cores.

When dogs chew on apple seeds, the amygdalin is mixed with their digestive enzymes. This forms the toxic gas hydrogen cyanide, which is especially dangerous to pups with liver disease.

While this sounds dangerous, few dogs ever chew thoroughly enough for this to happen. The choking hazard that apple cores present is more dangerous.

Are Apple Cores Bad for Dogs?

Apple cores themselves are not bad for dogs, but the seeds inside the core are. These are the ones to watch out for. This is where amygdalin is stored in apples.

The answer to this question is a little complicated.

Apple cores are not poisonous to dogs, they may not be the healthiest option. Apple cores are high in fiber, which is great for dogs, but they also contain a lot of sugar.

It is the seeds within the core that are poisonous.

Overall, it’s best not to feed your dog apple cores, seeds, or any other part of the apple.

Here are a few reasons why you shouldn’t:

As a dog owner, you want to ensure that your furry friend is getting the best possible nutrition. You may be wondering if apple cores are a good source of nutrition for dogs.

What Not To Do When Feeding Dogs Apple Cores?

When feeding your dog apple cores, don’t do the following:

My Dog Ate an Apple Core: What Do I Do?

You should never feed your dog apple cores. Although it’s only toxic to dogs when they have consumed a lot, it’s still not a good idea to give them these cores because they can’t digest them properly.

It’s not recommended to give dogs any apple cores. Most dogs won’t be affected by a few seeds, as they typically won’t chew them thoroughly enough to break them.

But the risk is not worth it.

If you are planning on introducing fruit to your dog, go with something other than apple cores.

Dogs love to chew on things, and apple cores are a great, healthy option for them.

If you’re looking for some alternatives to apple cores, here are a few ideas:

Apple slices work great as a healthy snack for dogs. Throw away the core, but keep the flesh. This provides plenty of nutrients. You can also serve the apple skin.

Another option is to give your dog some rawhide bones. These are long, thin bones that dogs love to chew on. They come in a variety of flavors and can help keep your dog’s teeth clean and healthy.[3]

Finally, if you’re looking for something a little bit different, try giving your dog some freeze-dried liver. This is a great source of protein and vitamins, and most dogs love the taste.

No matter which option you choose, make sure to supervise your dog while they’re eating so that they don’t choke on any bones or food.

Always consult your veterinarian if you have any questions or concerns.

Can dogs eat apple cores? The answer is no – at least not in large quantities. Apple cores contain a lot of seeds and pips which can cause intestinal blockages and other health problems for your dog.

As always, it’s best to consult with your veterinarian if you have any questions about what foods are safe for your pet.

Are Apple Seeds Poisonous to Dogs?

As a general rule of thumb, it is best to avoid giving your dog apple seeds. Apple seeds do contain cyanide, which is poisonous to both dogs and humans. While it would take a lot of apple seeds for your dog to become sick, it’s always better to be safe than sorry. So if you’re planning on giving your pup an apple as a treat, be sure to remove the seeds first.

While apple cores themselves are not poisonous to dogs, the seeds of the apples contain a naturally occurring substance called amygdalin. Amygdalin is a cyanogenic glycoside, which means that it contains a sugar molecule and a toxin (cyanide). When an animal eats an apple seed, the amygdalin is broken down in the gut and the sugar molecule is released. The cyanide is also released and can be fatal.