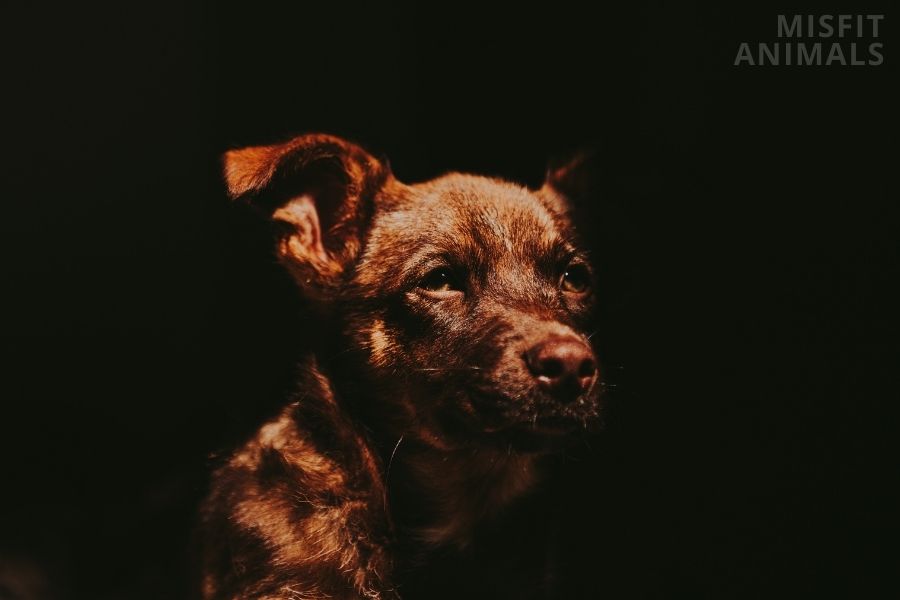 Domesticated dogs are not nocturnal by nature. Most are diurnal, though this can change according to the sleep pattern of their owner.

Dr. Dana Varble, the chief veterinary officer for the North American Veterinary Community said: “Pets who share their human’s bed tend to have a higher trust level and a tighter bond with the humans that are in their lives. It’s a big display of trust on their part”.

But it doesn’t just affect their trust in you, also their activity pattern.

In this article, we will analyze dogs’ activity patterns and the difference between breeds. Deciding whether dogs are nocturnal or diurnal animals.

Animals that are active after dark, rather than daytime are called nocturnal.

Nocturnal behavior is common among many animals such as lions, owls, and raccoons. Wild animals become active after dark for many reasons, such as:

They choose to do these activities during the night to have their vision and hearing to their advantage, as many small animals, and prey animals, are weaker in the darkness. While they spend the majority of the nighttime hunting, they spend the daytime resting and sleeping.

No, most dogs are not nocturnal animals. They are social sleepers, which means they change their sleeping schedule according to their owners.

Dogs are considered crepuscular, meaning that they are most active at dusk and dawn. Wild Dogs are said to be nocturnal. There are some dog breeds that are prone to be nocturnal.

This is due to their long history of adapting and co-existing with human beings, starting to copy their activity patterns. Dogs spend most of their energy during the daytime.

Yes, domesticated dogs are most active at dusk and dawn, making them crepuscular animals.

Dogs shift their activity pattern to whatever is most convenient for their social environment. They are influenced by human schedules and can modify their pattern without needing periods of transition, unlike other wild animals.

When Are Dogs Most Active?

Dogs are naturally more active in the morning and evening.

Domestic dogs wake up with energy and excitement after dedicated sleeping time, which is why your dog seems so excited in the morning. This is the time of day they have the most energy.

Depending on the breed and size, dogs are most active in the first few months of life.

When Are Dogs Least Active?

Dogs are usually the least active in the afternoon. They spend this time of the day resting and taking naps.

They also start to become less active after the age of six to nine months. They start to spend less energy once they reach maturity, which is one or two years because they experience a decline in their oxygen capacity

What Breeds of Dogs Are Nocturnal?

Even if most dogs are not nocturnal, there are a few breeds that are more prone to stay awake at night. Amongst them are:

What Do Wild Dogs Do at Night?

Wild dogs use the night to their advantage, hunting animals such as antelopes, warthogs, and rodents. They also choose to be more active at night and early morning to protect themselves from predators such as lions and hyenas.[1]

Wild dogs are active at night and early morning, spending their time mating, hunting, and feeding.

When Do Dogs Sleep?

Dogs get a majority of their sleep at night, but, because they are polyphasic sleepers, unlike humans, they sleep in multiple bouts throughout the day.

Dogs usually get their sleeping time somewhere between 9 PM and 6 AM, depending on their age and breeds. Puppies, in comparison with adult dogs, need more sleep, they can spend up to 20 hours per day sleeping, waking up several times in between the hours.

How much Do Dogs Sleep?

Researchers have found out that most dogs spend 50% of their day sleeping. More than that, they spend 30% of their awake time lying in bed, without doing anything, just relaxing, gaining more energy. Just like humans.

Larger breeds sleep more because their bodies are bigger and need more time to recover and gain energy. On the contrary, short dog breeds need less sleep to recover and have more energy.

Why Do Dogs Sleep so much?

Sleep is very important for dogs because it helps with dogs’:

Vets claim that lack of sleep can contribute to a dog being in a bad mood and also can make them more vulnerable to infections and illness.[2]

Small breeds have more energy and an easier time moving their body. This allows them to sleep less and spend less time recovering from daily activities.

Can Dogs See At Night?

Unlike humans, whose retina is dominated by cones that detect colors in the daylight, dogs have more rod cells that collect dim light, making their night vision better.

They are also helped by their strong sense of smell and capacity of seeing movement and light in the dark.

Depending on the breed, dogs have their eyes more on the sides of their head, which allows them to have a wider range of view and scan the environment around them faster than humans.

Where Do Wild Dogs Stay During The Day?

Wild Dogs spend their night hunting, which allows them to rest during the day. They usually like staying close to the water, cooling themselves from the hot African weather. Some Wild Dogs still hunt during the day and protect their pack from predators like lions and hyenas.

Domesticated dogs are neither nocturnal nor diurnal, they are somewhere in the middle. They adapt to their owner’s routine and modify their sleep patterns without a long time of transition needed. Wild dogs are nocturnal, using the darkness to their advantage to hunt and feed on small animals that have weaker senses in the darkness.

Dogs have more energy in the morning and evening and less activity in the afternoon.

How Many Hours a Day Do Dogs Sleep?

According to researchers, adult dogs sleep approximately 10-12 hours over the course of 24 hours.[3] They usually sleep multiple times during the day, depending on their age, breed, and size. Puppies sleep more than adult dogs. They can spend up to 20 hours of the day sleeping.

Are All Dogs Nocturnal?

Most domesticated dogs are diurnal or crepuscular. There are a few dog breeds that are prone to be nocturnal, as they are influenced by human sleeping patterns. African Wild Dogs are said to be nocturnal, and also crepuscular, hunting during the night and early morning.

Do Dogs Naturally Sleep at Night?

Like humans, dogs are diurnal animals, which means they get a majority of their sleep at night. They have adapted their sleeping pattern to co-exist with humans, changing it without any problems during the transition.

Why Are Dogs Social Sleepers?