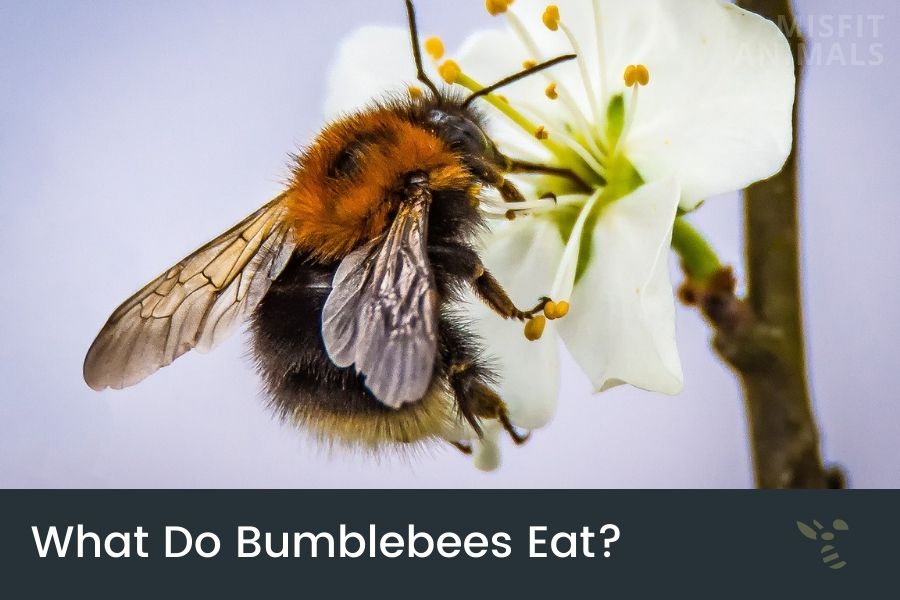 Bumblebees primarily feed on pollen and nectar from flowers, making them herbivores. They also make small amounts of honey, which they eat themselves.

Bumblebees are social insects that live in colonies with a queen, worker bees, and drones.

Pollen is collected by the pollen-carrying hairs of their bodies and used to provide protein. Nectar is also collected from flowers and is their primary source of carbohydrates.

In this article, we’ll cover what a bumblebee eats, how they get food, why it’s important for them to eat, and more.

Bumblebees are what are known as nectar feeders. This means that they consume the nectar of flowers for food. They require a lot of energy in order to fly, which is why they eat often.

Aside from nectar, they also feed on pollen and honey.

Pollen is often confused with nectar, but they are two different substances.

Where nectar is the sweet substance located in flowers, while pollen is a powdery substance, used for flowers to reproduce.

Pollen that is collected by the bumblebees is used as a protein source to feed themselves and their young.

As bumblebees collect pollen, they help pollinate crops and plants, which is vital to our ecosystem. [1]

Nectar is the primary food source for bumblebees. Workers consume more nectar than pollen, and they need to consume a lot of it.

Nectar is a sweet liquid that is produced by flowers and collected by bees. It provides the energy bees need to fly and forage.

Most bumblebees have long tongues, meaning they prefer flowers with tubular shapes, though this does somewhat depend on the species. [2]

Honey is nectar that has been modified by bees. Most people are familiar with honey from honey bees, as they’re the ones that produce the most of it, though bumblebees also produce a little.

Bumblebees don’t make surplus honey (as honey bees do), so they only have enough for themselves.

The bees chew the nectar, mix it with saliva and remove water from it until there’s only about 20% water (while nectar is normally 70% water). They then seal the honey in cells in the hive. [3]

Honey is an important food source for bumblebees, and they consume it during the winter when flowers are not blooming.

What Do Bumblebee Queens Eat?

When a bumblebee queen starts a new hive in the spring, she collects nectar and pollen herself. When the first batch of workers have hatched, they’ll take over this job and feed the queen.

She will also consume honey, which the workers produce. Bumblebee queens must eat a lot of food to maintain their high energy levels to lay eggs.

What Do Bumblebee Workers Eat?

Bumblebee workers are herbivores, as they exclusively eat nectar and pollen from flowers. They will also consume a small amount of honey.

Bumblebees need to eat a lot because they use a lot of energy when flying, caring for brood, or building their nest.

Bumblebees also consume large quantities of water, which they use to keep themselves hydrated, as well as keep their nest cool.

What Do Bumblebee Drones Eat?

Bumblebee drones eat the same things as workers, including nectar, pollen, and water.

Bumblebee drones will typically be fed by the workers, just like the queen. Their main job is to mate with virgin queens in late summer and fall, and don’t do much besides that.

What does bumblebee brood eat?

The brood, which is eggs, larvae, and pupae, is fed by the workers. They feed on both pollen and nectar, which they need to grow into adult bumblebees.

Studies show, that when brood is starving, they emit hunger signals to the workers. This way, the workers can quickly fetch food for the larvae.

How Do Bumblebees Eat?

Bumblebees have a proboscis, which is a long, straw-like tongue that they use to suck up nectar from flowers. They extend this organ into nectar deposits to suck up the contents.

While bumblebees bees typically travel around 0.5-1 mile from their nests in search of food, they can forage much farther away. If no flowers are close, they can fly up to 3 miles away to gather food. [4]

When bumblebees eat pollen, they use their mandibles. The mandibles are an extension of their mouths and work as a big pair of pinchers. They use this to chew up the pollen until it’s small enough to ingest.

What Do Bumblebees Drink?

Bumblebees, like all other animals, need to drink water in order to survive. They get the majority of the water they need from the nectar and pollen they eat, but they also drink from puddles, ponds, and streams.

They usually drink by landing on the surface of the water and extending their proboscis down into the water to suck up the liquid.

Bumblebees can also drink from flowers that have droplets of water on them like lotus and hibiscus blossoms.

They land directly on these flowers and suck up the water droplets with their proboscis. While doing this, they also gather nectar and pollen.

Bumblebees need water for the thermoregulation of their own body and their nest. When bumblebees get too hot, they die, hence they need to keep their body temperature and nest temperature within the correct range.

They will spew water on the nest to cool it down, and may also do so at their nestmates if they’re overheating.

How Much Do Bumblebees Eat In a Day?

The queen bumblebees may consume less nectar, but more pollen. This varies depending on the day and species.

How Long Can Bumblebees Survive Without Food?

Bumblebees can’t live very long without food, as they need a lot of energy to lift their heavy bodies off the ground when flying. They can usually only live for about 40 minutes without food if they’re very active, and a couple of hours if they’re not very active.

This also depends on whether it’s a worker, or the queen, as well as their activity levels.

Related: How long do bumblebees live?

During the winter, the queen bumblebee hibernates, unlike honey bees which are awake all year round.

The queen will fill her stomach with as much food as possible before the winter, whereafter she’ll find a place to hide out the cold months. The workers will die before winter.

The bumblebee queen can hibernate for up to 9 months, only living off of what she could eat before going to sleep.

When bumblebees collect pollen and nectar, they help out with pollination, which is vital to our ecosystem.