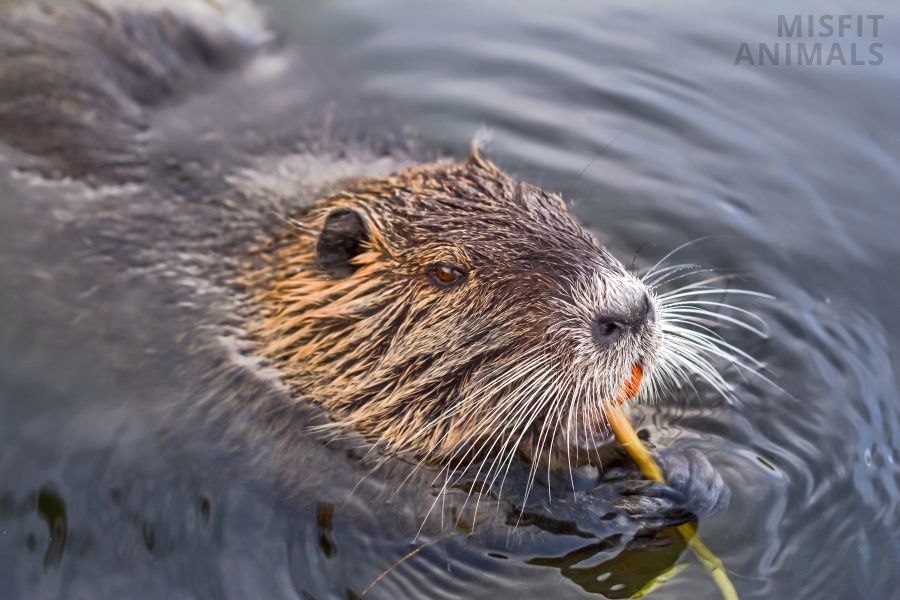 No, beavers do not eat fish. It’s a myth (origins unknown), as beavers are herbivores. They eat nothing but plants, aquatic plants, grasses, twigs, leaves, and other plant material.

As they are constantly surrounded by water and have large teeth, they look like they eat fish.

But do beavers eat fish, or not? And why?

In this blog post, we’ll explore what beavers eat, learn about their relationship with fish, and more.

In short, no. Beavers are herbivores, which means that they only eat plants.[1]

Beavers’ teeth are primarily flat and specially adapted for grinding down plant matter. They have two different types of teeth: front and back teeth.

Their front teeth, or incisors, are long and sharp. These are great for gnawing on tree bark, which is a beaver’s favorite food.

But their back teeth are much flatter, which helps them grind up plants so that they can digest them better.

So why do beavers eat plants?

Well, plants are a great source of nutrients and energy. They also contain fiber, which helps keep a beaver’s digestive system healthy. And since beavers are always busy building dams and lodges, they need all the energy they can get.

As previously mentioned, beavers are strictly plant-eaters. This means they don’t eat meat of any kind. Their digestive system is not designed to process meat at all. If a beaver were to eat meat, it would get sick.

So what do beavers eat if they don’t eat fish or meat?

Their diet consists of the following:

In the winter when food is scarce, beavers eat their own lodge if they run out of food.

No, beavers do not eat bass. As we mentioned before, beavers only eat plants and plant matter. This means that their digestive system cannot handle other foods such as meat.

Do Beavers Eat Fish in the Winter?

No, beavers are not known to eat fish during the winter months. Beavers are strictly herbivores all year round, even when food runs low. They only consume plants and plant-based materials, whether it’s freezing or hot outside.

During the winter months, beavers eat the buds and twigs of their favorite trees and shrubs. This includes willow, alder, poplar, and birch trees.

Beavers only consume the outer layers of the bark, not the inner wood.

One might think that, since beavers live in watery environments and are good swimmers, they would eat fish as part of their diet. This is not the case. Beavers actually avoid eating fish whenever possible.

There are a few theories as to why beavers don’t eat fish:

In the end, it comes down to how the beaver evolved. Somewhere along the way, it became apparent that beavers had a better supply of food in plants than in fish, resulting in plant-eating adaptations such as:

Do Beavers Scare Away Fish?

Some say that beavers are a nuisance that scares away fish, while others believe they provide valuable habitat for fish and other wildlife. So, what’s the truth?

Beavers can be disruptive. They are known for their dam-building activities, which can cause flooding and damage property.

However, it’s important to remember that beavers are an important part of the ecosystem. They provide homes for many other animals, including fish. Some studies have shown that beaver ponds can increase the populations of certain fish species.[2]

So, while beavers may not be everyone’s favorite animal, they play an important role in the environment.

No, they don’t. Fish are not part of the beaver’s diet, and beavers don’t kill for sport. Therefore, they do not kill fish. There have been instances where beavers have dammed up waterways and caused fish to die from a lack of oxygen, but this is not intentional and is not considered killing.

What Foods Do Beavers Eat?

Beavers only eat plants. They have evolved teeth specifically designed to chew on plant matter and feed on many of the aquatic plants found around them, along with grasses, twigs, and leaves.

Animals eat what’s easiest for them to find a lot of. Through evolution, some animals learned to hunt, while others learned to digest plants.

Beavers are part of the second group.

As they spend a lot of time in the water, they forage aquatic plants, such as lilies. These provide a lot of nutrients and energy.

Beavers eat whatever plant material is most available. This depends on the season.

Beavers are known to store food for the winter months. They collect branches and logs and drag them into their dams or lodges. They also cache (hide) food underwater near their homes.

This allows them to have access to food even when the rivers and lakes are frozen over.

Overall, beavers have a very diverse diet that changes with the seasons. They are able to adapt to their environment and find food that meets their needs.

Beavers don’t eat fish because they are herbivores and prefer a vegetarian diet. They have specially adapted teeth for chewing plants, and their digestive system can efficiently break down plant matter, but not meat.

Beavers also don’t kill fish, except for when they accidentally cut off the water because of their dams.